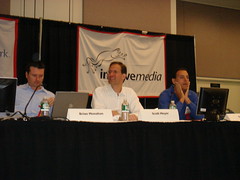 This is actually the first session that I covered at the San Jose Search Engine Strategies conference, but I did not get a chance to clean up my notes and post until now. It was a good session about a topic that is very close to the consulting practice of our PR and marketing agency.

Part of the ClickZ track, this session was moderated by Rebecca Lieb and included Gary Stein of Ammo Marketing, Scott Meyer of About.com, Hans Peter Brondmo of Plum, a new social networking service and Brian Monahan from IPG.

First up is Gary Stein who introduces the notion of “clique-through”, which means to use social media to spread your message deep but not wide. The “clique-through” approach is to get specific segments to adopt a particular message. It offers more long term value than the “lightning in a bottle” associated with buzz marketing.

Deep vs. Wide – You could try to get a message out wide, example: Jib Jab. It captured the moment, but now it’s gone. It was wide but temporary.

Another example involved agency.com that made a video of itself pitching Subway. It was not targeted wide; it was focused on a slice. Not much use for the video outside a niche audience.

Now Gary offers some definitions. A clique-though: The degree to which an exclusive group hears and accepts your idea. Cliques are built upon norms and group culture. To be accepted means to be built into that culture. To be effective, focus on the clique, not the wide audience.

What does this mean to social media? A Pew Internet and American Life study showed that most blogs are created as a form of creative expression, to document personal experience and as a way to stay in touch with friends and family.

Younger demographics think of blogs in terms of chatting, communication and sharing. Ex: MySpace. Think of MySpace not as 75 million users, but millions of groups of 4 people or cliques. Information comes into a clique and becomes a part of it.

Five steps to marketing to cliques:
1. Tightly define your group. Gives example of tax attorney and M&A attorney as specific groups. It’s not enough to define a group like “financial attorneys” as that is too broad.
2. Be not afraid of your features – When you’re talking to a click, you need to focus on the features.
3. Look for an increase in influencer ratio – A clique is a gathering of people. They pass new information as currency and then go away and make recommendations. Tactic is to drop your message into the group and they will take it and pass it along.
4. Support the community – Cliques are hard to get into. Basically need to “buy” your way in.
5. Clone the tactic – Once you’ve done it right, apply to other similar situations.

Tool mix includes directories and networks. Where do you find networks?

Next up is Scott Meyer who starts out by providing four tips about how to be successful with social media:

Four things to remember about social media:
1. Success in social media = engagement + authenticity x audience reach.
2. Look for the riches in the niches. Social media takes many forms.
3. Lean, but don‚Äôt be intimidated, into following early adopters.
4. Cede only as much control of your brand as you feel comfortable with.

Now Scott goes into the presentation with information about About.com as a part of the New York Times. About.com is made up of Guides who are compensated based on the growth of their sites. About.com has 540 sites, 50,000 topics. 10 years old.

What About does with social media:
– Enables users to see themselves reflected in the site
– About.com’s use of social media takes many forms
– Loyal users
– Open but controlled

Social media is the foundation of many of About.com’s most popular sites. Users submit questions or information and the Guide uses that as a basis for the content that is produced. Social media expands content and marketing opportunities. Example was a site Guide that was given access to the Winter Olympics and posted in conjunction with NBC.

About has “blogified” their sites using WordPress. They’ve also made it easy to bookmark content and they offer RSS feed subscriptions. They also offer quizzes to interact with the audience on behalf of advertisers or as part of the advertising.

Gives example of a SNL parody of “The Office”. NBC encouraged others to make promos on YouTube. Over 400 were submitted. NBC is using the audience to create promos. The target audience sees themselves in the media.

Another example of John Tucker must Die ‚Äì movie where the audience was engaged as part of the promo.

Next up is Hans Peter Brondmo who is a ClickZ author and is starting a new social networking site/service called Plum. Tagline: collect share connect.

Hans shares info about the learnings they have had in starting a social networking service.

Plum is a scrapbook for everything: Web pages, images, video, audio, etc. Plum is a way to organize and share.

Algorithms analyze the collections and match users with others that they might want to connect with – similar interests.

How do you participate when everybody has a loud voice and a diversity of voices? Search is the answer. Social media improves the signal to noise ratio.

How can you be in that place where people are discovering new interests?
– Learn to hate Google

Info-voyeurism – Cites the reality-TV voyeur phenomenon. For Plum, people are interested in seeing what others collect.

Can you manage a mob?
Thinking in terms of managing a mob is the error. You can participate, influence and leverage, but you cannot control.

Control – Many people think you have to give up control in social media. You don’t cede control, but you also don’t come at it from a top-down approach.

Trust – Confidence takes time to build but can be lost very quickly. If you build a community that really feels a part of your brand, you’ll be better prepared to weather any problematic times. Your community will come to defend you.

Note: Hans computer (a Mac) displayed a flashing blue screen every 5 seconds – luckily there were no epileptic seizures during his presentation but it was very distracting.

Last up is Brian Monahan from IPG. Interpublic emerging media lab who works as the director of user generated content practice. Brian presented information from a study on users that create video, “The emergence of an alternate media universe.”

The traditional and alternate media are not going to stay separate. Word of mouth is far more powerful an influencer than an advertisement. The opportunity to get people to talk about brands in their own words offers some compelling reasons to understand the alternative media space.

First step for the study was to work on understanding What motivates “generators” of video.

Offers the results of a test involving the Gamespot website that offers the opportunity to upload videos of themselves explaining why they upload videos.

Findings:
– Generators tend to be young men.
– They make videos often and quickly
– The kind of content that they upload is mostly original content.
– 57% are willing to make commercials
– 67% would be willing to make a video about a brand based on recognition of their own creativity. 60% for money. – There’s also a small segment that would take the effort to create a negative video about a brand.

Takeaways on (video) Generators:
1. Opinionated
2. Crave recognition
3. They’re class clowns – they are looking for recognition and attention
4. Sarcastic
5. Reactive rather than original.

Interesting in execution, but this is not a place where the next big brand idea is going to come from.

Rebecca – Is the panel aware of any successful viral campaigns for women and girls?
Scott: Dove real beauty campaign

Rebecca – How important is control for marketers in this space?
Gary: Extraordinarily important. Cites the Chevy Tahoe CGM example (which was disastrous for Chevy). The amount of control depends on the brand.
Brian – It’s smart to filter content but also have a thick skin. If your filter is too tight, no one is going to watch it.
Hans – Many think it’s a good idea to include a grass roots component – but we’re still figuring out how.
Gary: This is a new era in advertising.

Audience: How do advertisers find participants in CGM video?
Brian – Nothing established yet. Seems like right now it’s the brand specific contest that is the best way to become involved in this kind of study.
Hans – Another way to approach it is to creating something great and attention/opportunities will come to you.