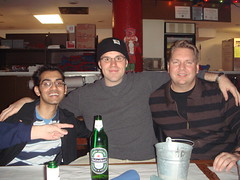 Thomas (TwisterMC) and I arrived fine in Chicago without delay. Unlike many other travelers, including Shoemoney who I talked to about a 4+ hour delay.

After getting settled in I went downstairs to Kitty O’ Sheas on the ground floor of the Hilton to see which search marketers were about and it was a who’s who of SEO in there. Rand Fishkin’s bright and smiley face stood out as the first person I recognized in the somewhat dimly lit pub along with many others including: Loren Baker, Neil Patel, Cameron Olthius, Kim Kraus Berg, Dave Temple, Frank Watson, Chris Boggs, Bruce Clay, I finally met David Wallace, Todd Malicoat, Dave Naylor, Jeremy Shoemaker, Justilien, Jonathan Hochman, Liana Evans (who is running a “hat bait” promo and Rebecca from SEOMoz. There are many others but I forget names and we had to get out to dinner.

I recommended “Gene and Georgetti’s” and somehow we ended up at “Dick’s”, one of those places where the wait staff are intentionally rude and give poor service. The service was actually great, the food as good as could be expected and the conversation and experience was all around fun. There was a Janis Joplin cover by the band that went pretty well too.

We ended things up back at Kitty O’Shea’s where a good number of search marketers were hitting it late and I met a few very interesting people who I did not get business cards from, but learned some interesting things about domainers and domain name monetization, AdWords arbitrage and affiliate marketing. I may need to change some of my planned sessions to cover on Monday!¬† Now it’s off to sleep until day one of SES Chicago.