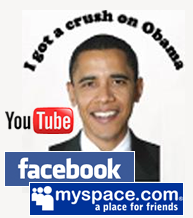 Believe it or not, social media just may be what elects our next president into office. From Obama’s Girl to Giuliani’s Girl and now Hillary’s Girl, YouTube and other social media outlets will have a much larger impact on the younger voters than anything else.

Lets face it, watching a presidential debate is not high on many people’s list. It may have worked back in the day, but now more and more people are turning to the Internet for news and filtering out what they don’t want. Included in the filtering process will more than likely be campaign speeches, debates and candidates views. Instead, much of America will wait until someone spins it on MySpace, Facebook or YouTube before they really start paying attention. They won’t stop to fact check, they’ll just believe in it. That’s the way social media works though, if your friends say it’s true, it must be.

So what can the candidates do? Embrace it. Obama’s girl just may bring in tons of the younger vote. Voters may just choose the hottest girl, catchiest song or best video over the best debate or speech. What candidates need to really do is meet up with the person that is doing their social media campaign and see if they need any assistance or just say thanks. Candidates need to be careful though as the social media can turn on you in a second. Mistreat or say something bad about the girls and they’ll spin you completely the other way.

Really it’s nothing new as candidates have always been about getting celebrities or influential people behind them in order to sway the public. Now, instead of the candidates making the effort, the YouTube fans are.

It’s cost effective too. If some college kids come up with an idea, shoot a video and put it on YouTube, the cost is $0 for the actual candidate. Then, instead of buying TV spots, it’s getting free placement across the web. That kind of advertising you can’t buy! Heck, if it’s good enough, the news may just run a story on it for free. Even better!

The 2008 presidential election will be an interesting one. For the first time in history we have someone other than a white male running for office. However, the bigger story may not be gender or race, but rather the social media influence of sites like Facebook and YouTube that really create the outcome of the election. It’ll be interesting, that’s for sure.