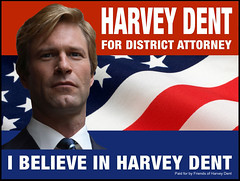 So what is the coolest new viral campaign online and why? Check out www.ibelieveinharveydenttoo.com and then come back here.

There isn’t anything on the page, is there?

Certainly not that photo of Aaron Eckhart that can be found by removing “too” from the URL: www.ibelieveinharveydent.com

Do you feel like me the first time you viewed this site, thinking that you must have missed part of an exciting new campaign for the upcoming Batman epic “The Dark Knight”, of which Harvey Dent, Gotham’s DA and future criminal mastermind “Two Face” would, surely play an integral role? Do you feel compelled, like I did, to search out a forum for more?

No need for that – I’ll tell you everything you need to know here.

First, while viewing the www.ibelieveinharveydenttoo.com site, go to the “Edit” option in your browser and select “Select All”. Without spoiling anyone’s surprise, it seems clear that the Joker will play an overwhelmingly welcome role in this film.

Copy the text from the page into a standard word document.

Do a find/replace for “ha” and replace it with a blank space, to discover a secret message indicating when we may see our first glimpse of Heath Ledger in character as The Joker.

[Lee: With a little checking, there’s this strange image of what might be the joker and this site: Rent a Clown. The marketers of this viral site have even stimulated discussion (and links) on Wikipedia “Viral Dent/Joker Page” and an entry on DMOZ]

What makes this a great viral ad?

Any campaign that can achieve an objective of turning a film into an event, complete with a fully engaged online community nearly a full year in advance, is the very definition of an effective viral campaign.