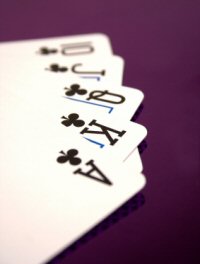 Early in my marketing career I sold classified advertising for a large and influential alternative weekly newspaper in the Twin Cities.

A true benefit of this job was experienced by friends of mine, met through occasional dabblings in the local comedy scene, who turned to me to get the word out about an upcoming show via a line ad on our back page.

Anyone familiar with an alternative news weeklyâ€™s back page is certainly no stranger to the type of ad typically represented there. Without providing too much in the way of detail, letâ€™s just say that anyone â€“ ANYONE â€“ will say anything â€“ ANYTHING â€“ just to get found.

It was this type of environment that fostered a good friendâ€™s idea for an ad regarding his upcoming sketch comedy show â€“ which appears word for word, minus identifiable info, below:

Getting found is half the trick, right?

What happens, then, when someone shows up early with their own chair, and doesnâ€™t get the joke? (Note: This happened, by the way. Exactly as described. It was an unpleasant situation for the group, the venue, the embarrassed patron, and probably the chair).

What does this story have to do with search engine marketing?

While this story comes courtesy of a more traditional communication channel, it serves as an example of the methods employed, or suggested by, those with an inadequate or corrupt understanding of effective SEO. With adequate resources and/or the right connections, black hat flavored tricks and blatant use of highly popular yet unrelated keywords can serve to drive the occasional online traffic spike. However, is this good SEO practice? More importantly, is this effective marketing?

SEO is not just about getting found and SEO is not a means to an end within itself. Rather, it lives within a full marketing framework â€“ a framework about more than just driving traffic, whether it be brick & mortar or online.

Marketing at its core ensures the right people find you for the right reasons. Itâ€™s about ensuring the strength your messaging deserves resonates throughout the language of each of your tactics whether they be marketing with social media, email or public relations.

An objective marketers should hope to achieve with their branding and promotion efforts is a message so resonant that it will migrate from the communication channels your prospect frequents all the way to their thoughts and dreams. In the end, they will not be able to think of your industry without remembering your message.

But does this really apply to search engine optimization, where we pull a prospect in using a relevant keyword phrase as opposed to a full board message?

Of course. While a television commercial trying to â€œpullâ€ customers in to a big sale may be easier to dissect in terms of the message and outcome being communicated, of equal importance is that anything we use to â€œpullâ€ a prospect leads them somewhere with just as expected of an outcome.

To reflect back on the traditional media example shared earlier in this post, what good is bringing customers to your show expecting â€œpornâ€ if youâ€™re only selling comedy? In the same sense, what good is driving traffic to a blog post about marketing using the keyword â€œonline pokerâ€ if poker is the farthest thing away from what you are talking about?

(Note: Iâ€™m taking a chance that regular readers will understand the joke. For casual readers that do not, even in online poker â€“ nothing beats a royal flush, pictured above. Hence, your relevance.)

Search engine optimization is a set of tactics that can significantly increase the likelihood your message will be discovered in any of a variety of communication channels. It should be handled with the same level of importance, and message reverence, as any other tactic marketers employ. No more, no less. To think otherwise is to resign yourself to sort through an infinitely random number of errant searchers who will soon overwhelm you. On the plus side, theyâ€™ll probably bring their own chair.