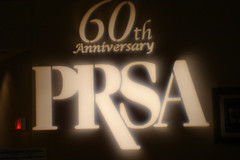 I just returned from the Public Relations Society of America (PRSA) International conference being held in Philadelphia where I participated on a panel, “Social Media, What Every PR Practitioner Needs to Know” with Rob Key of Converseon, Nicco Mele of echoditto and Peter Himler of Flatiron Communications who handled moderation duties.

Fifteen minutes before the session, the room was packed with people eventually standing against the back wall and it was clear that both the room and the topic of social media were going to be hot. 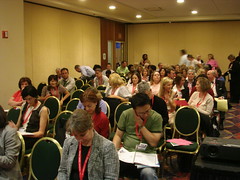 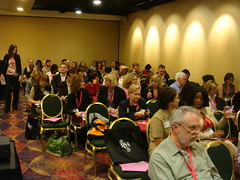 After introductions Peter Himler started out the session by having Rob, Nicco and I explain our respective companies and provide insights into the over riding topic of PR and social media. Rob always does a nice job with that as he’s quite “in the thick” of social media from every angle, ranging from search to PR to virtual worlds. In fact, his company Converseon won an OMMA Award for their work with “Second Chance Trees“, a virtual world project directed towards promoting reforestation both virtually and in the real world. 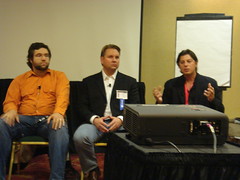 My charge was to talk about how search marketing affects PR and social media as well as the importance of Google to that end. If you read this blog regularly, then you’ll know I went on my regular rant about Push and Pull PR, holistic content optimization, top down keyword messaging with all digital communications, digital asset optimization and the effects both on influencing search results in a Universal Search environment as well as creating direct interaction opportunities with distinct search channels.

The rest of the session focused on questions from Peter to the panel and from the audience. While I’ve become fairly adept at live blogging conferences, I’m not so great at doing so while speaking/answering questions so hopefully there are a few blog posts out there of the session with details. Questions did range from “How do I comment on a blog?” to asking for examples of how to leverage social media for reputation management.

At one point near the end of the session, Peter Himler asked the panel what books they would recommend for PR practitioners as they try to navigate the new waters of social media and getting buy in. Interestingly, Peter, Rob and myself all recommended Mike Moran’s new book “Do It Wrong Quickly” which was the focus of yesterday’s blog post.

It was a great session and very full. Hopefully PRSA will be able to secure larger rooms next year as this topic will only grow in importance if not for the momentum, but for the pressure managers and clients will be putting on their PR agencies to help them figure out where social media fits (if at all) within their PR strategy.

After the session I visited the exhibit hall which seemed like a sprinkle of companies compared to the monstrosity at the DMA07 show last week. If you want to get a dose of over stimulation, walk the DMA trade show floor with all the different print materials, semi trucks and monster exhibit booths vying for your attention.

I spoke with Sarah and Michael at PRNewswire and had my photo taken for some kind of promotion they might be doing with an ad on Times Square. We’ll see about that one. 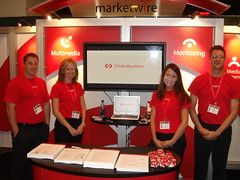 I talked briefly with Joe Beaulaurier and then stopped by the Marketwire booth to see what they’re up to. Apparently they’ve partnered with Bruce Clay to develop tools for optimizing your press release. They also have a social media news release offering. I had lots of questions and a few recommendations and it was an interesting conversation. With all the bells and whistles that are being implemented with the wire services, I really wonder how much research has been done with journalists to see if they even care about multimedia and social media enhanced press releases. Marketwire says they have the results of a survey coming out soon. 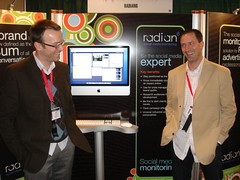 Another booth that caught my eye (cool branding and message) was radian6 which is a social media monitoring solution – similar perhaps, to Buzzlogic or Converson’s Conversation Miner offering. Manning the booth were David Alston and Chris Ramsey who showed me a “wow that’s cool” demo of how their software tracks conversations and presents numerous flexible ways of filtering the data to identify advertising opportunities on sites, blogs or social media communities where there’s a burst of viral traffic as well as brand and topic monitoring.

A powerful web crawler is behind all the data capture and ability to report in near real time what’s happening on the social web. If it works out, I may do some testing of the radian6 application and report my findings here. In the meantime, here’s their blog. 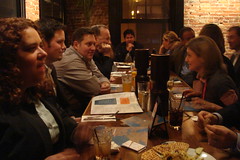 The day ended with a nice blogger/geek dinner at Marathon Grill where I had a chance to chat with Brandy of WebmasterRadio.FM, PRSA conference and PR blogger/practitioner Kami Watson Huyse, Barbara McDonald a VP at PRSA, Eric Schwartzman of On the Record Online podcast (who interviewed me Sunday am) and Li Evans who drove down for the dinner.

The next day was filled catching up with all the emails I missed during DMA07 last week and over the weekend. I also worked on preparations for an upcoming teleconference with Bulldog Reporter , “Boosting Web Traffic: Best New Ways PR Can Supercharge Websites to Drive Investors, Journalists and Customers to Visit Online” with participants from Intel, iProspect, MWW Group, Ogilvy PR and TopRank. The teleconference is scheduled for November 1st at 1pm EDT.

A quick stop and chat with Eddie and Brandy of WebmasterRadio.FM (Daron was sick – food poisoning) and I was off to do a 2 hour tour of Philly, hitting the Liberty Bell, Independence Hall and then over to the Philadelphia Art Museum which wouldn’t be complete without a quick shot of the Rocky statue before catching a taxi to the airport. 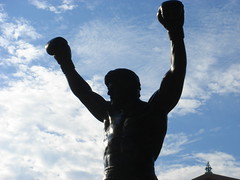 Next up should be ad:tech in New York.