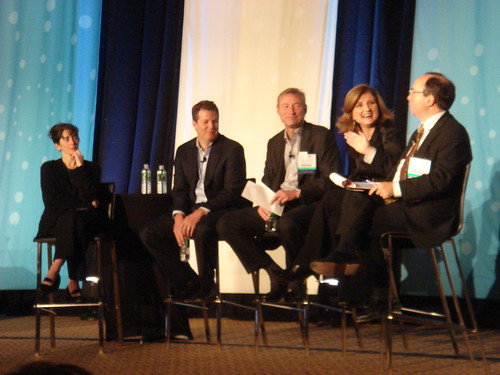 The panel was moderated by Randall Rothenberg, President and CEO of IAB. Panelists included:

Randy Rothenberg of the IAB started out with a brief overview citing promosing industry statistics: The interactive advertising industry is near $20 billion, there are over one billion internet users world wide and 80% of adults use the internet.Despite that progress and good news, the interactive advertising industry is at risk due to possible regulation from “anti consumer advocates”. The FTC has raised the spectre of regulation not only of cookies but reccommendations to implement opt in requirements for all ads. The regulation advocates’ position is basically, “The time for fact finding is over, it’s time for us to regulate.”

The interactive industry will only remain strong and vibrant if we respect the consumer. Companies need to watch more than what’s affecting their own organization, but also what’s happening at the federal and state levels.

Let’s talk about the “new P”. What have been known as portals are now calling themselves platforms including Google, Yahoo, MSN and of course Facebook. Is the trend towards platforms important or is it just a fad? What will the relationship be between platforms, agencies and publishers?

Suzie Reider believes we’ll continue to go in this direction with the shift towards user generated content. The idea of platform is less a label but more about giving users tools to contribute and interact.

According to Matt Freeman, platforms and user generated content create a challenge for agencies as media production costs drop, allowing users to easily create their own media. It ends the dominance in the supply chain of media production by the big media companies.

Michael Barrett says by definition, MySpace is a platform. Bringing together disparate tools that empower users to communicate, share and discover is what spurs the growth of social networking sites like MySpace.

There’s a lot of good coming from platforms in terms of data collection – enabling advertisers to get the right ad to the right person at the right time. Platforms provide publishers with monetization opportunities and they help agencies through lower costs to deliver services. “Those with the data hold the cards”.

She believes that Huffington Post is itself a platform. What started out as a political publishing brand has been a launching point for engaging users other interests as well, which spurred the launch of other topical verticals and tools to facilitate user interaction.

The more interactive tools you can give a community, the more time they spend on the platform. Community is key to platforms. AS an example, there were over 250k moderated comments last month on the Huffington Post and there are also 1800 bloggers.

Now the conversation turns to video. A year ago at ad:tech, the buzz was focused on video content and advertising. Moderator Randall Rothenberg asks, “Did that buzz live up to the promise?”

With examples like the one given by Suzie Reider involving the Opera channel launching on YouTube.com and attracting massive numbers of subscribers in just a few days, video is indeed meeting expectations. But there are challenges.

Video is increasingly important for Huffington Post and they are working to find more innovative ways to work with video advertising in place of pre-roll video ads and truncated RSS feeds. Huffington post is forgoing such tactics and providing this kind of content ad free. Readers are responding with more site visits.

Other challenges with video advertising include format lengths according to the type of content, whether it’s a produced show, made for media like lonelygirl15 or user generated content. Michael Barrett says agencies need to experiment and see what works. A 30 second pre-roll ad for a 60 second video isn’t going to appeal to anyone.

With the increased popularity of online video, many advertisers looked at video platforms as just another place to run their commercials, says Michael Barrett. The role of agencies is not to create ads, but to create ads as content. Agencies need to make brands destinations in and of themselves, says Matt Freeman.

If insertion is too obtrusive for consumers, then how do you get paid? Arinanna Huffington gave the example of a program where she and readers at the Huffington Post shared photos of themselves and their Prius’. Huffington Post “got paid” for the program and Toyota gained substantial exposure from a community of brand enthusiasts.

It was inevitable that the conversation would turn to Facebook. With the announcement that Facebook will offering targeted advertising, Randy Rothenberg asks, “How are we going to construct the line between consumer privacy expectations and the interest from marketers in social media?”

The number one complaint from consumers is to make ads more relevant and explaining what it will take to provide more personalized ads is an ongoing educational challenge. One that the IAB is undertaking with a campaign about an ad supported internet.

One of the more interesting questions from the audience concerned the future of the pre-roll ad. Will pre-roll go away and where does that leave the agencies? Is the agency best to create the content or the community?

Suzie Reider agreed with the panel that pre-rolls are too obtrusive and gave a good example of YouTube implementing an overlay ad on the bottom third of videos. There are smarter ways to get advertising sponsorship into the media.

Be sure to visit the Flickr set on ad:tech NYC 2007 as well as daily coverage on the ad:tech blog.