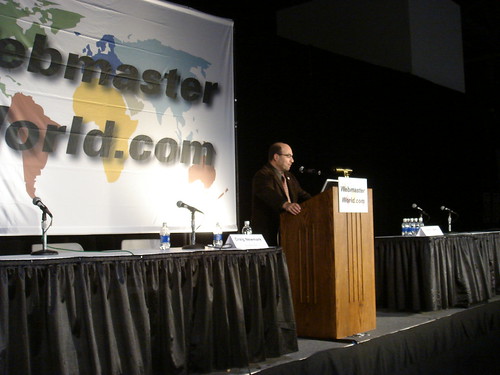 WebmasterWorld Pubcon opened up today with opening remarks from Brett Tabke and a keynote presentation by Craig Newmark of craigslist.

“There’s nothing alturistic about craigslist”

As often happens with companies that grow successfully, founder Craig Newmark is not running craigslist any longer. Turns out his skills are better served working customer service.

Craig started things out by sharing the history of craigslist to a huge crowd in a cavernous room at the Las Vegas Convention center. This also included the disclosure that he did wear a plastic pocket protector and the black glasses taped together along with the social skills that go with the stereotype. But then moved to San Francisco.

In 1994 while working at Charles Schwab, Craig was active with evangelizing news groups. To give back, he started an email list sharing with friends about events in the San Francisco area. Word of mouth spread the list and people asked to put things for sale, jobs on the list.

“The thing about the net is that everybody’s included”. “The net is everyone’s printing press”.

In ’95 his initial software (Pine) couldn’t handle list size of 200 plus so he moved to another list software and with the encouragement of friends, called it “Craigslist”.

The features of the list grew including the addition of categories, tags and eventually, Craig wrote code to turn the emails into HTML. He hasn’t coded since ’99 and the current CTO along with the technical tam are not keen on giving him access to anything but his own machine. 🙂

Microsoft Sidewalk approached him to run banner ads on his site. He said no to that and no to pop ups. “It didn’t feel right”. He didn’t need the money as an “overpaid programmer”.

Craig decided to start to running craigslist as a volunteer organization. However, Craig was not in a situation to “lead” them, he was busy working as a programmer. Volunteers told him it wasn’t working.

In 1999 Craig took control back and started changing Craigslist from a hobby into a real company and hired Jim Buckmaster who is now the “dude” according to Li Evans who is sitting next to me writing her post about the keynote for Search Engine Guide.

With a keen sense of humor, Craig admits the technical staff at craigslist is tasked with distracting him with new gadgets to keep him from messing with technical operations.

Work on craigslist continued and they started another geo, New York which took off. They started showing people’s email addresses in ads, but those got harvested by spambots. Anonymized email addresses and gave people the option of posting with email or anonymously.

Craig makes it clear that craigslist is not some bubble company in it to make the big bucks in some kind of exit strategy, “There are no MBA’s, we’re making it up as we go along.”

He prefers not being in the spotlight as well, “Many people don’t believe I exist and I would like to encourage that”.

craigslist currently gets 9 billion page views per month. Technology keeps improving and they’re still running Linux, Apache, mySQL and Perl on 120 machines in a co-location facility. There’s a splash of Mac and Windows, but the organization is mostly Linux.

If he’s learned one thing, it’s to keep things simple as evidenced by the fact he still uses Pine, the same software he used initially to start craigslist today as email tool.

Is often asked, “Why did Craigslist take the path that it has?” No plans to sell the site. Just doing what feels right. Running the site based on the notion of shared values. Treat people the way you want to be treated.

If you trust your community they’ll respond by trusting you.

Describes the invention of the printing press as the inventor of the internet, a metaphor for

Something big is happening. People are empowered as publishers to make changes. Electronic Frontier Foundation working on telecom amnesty bill and other initiatives. Craig is giving his speaking fee to the EFF who are doing the heavy lifting.

How do people do business on Craigslist?
“Find the city and categories you want to advertise in, see how others are using it. Post your ads as you see fit. Each site has it’s own culture. Do as the Romans do.”

How can search engine marketers ethically use Craigslist?
“If you push the boundaries, we’ll notify you and try to work it out. Or not be allowed to use the service.”

The essence of craigslist is that it’s a community. What the craigslist management team is very focused on making decisions that support preserving the community. 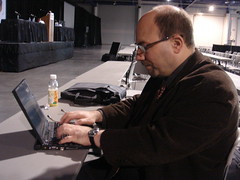 After the keynote was over and the crowd cleared, I was finishing this post up and talking to Jonah Stein, when Craig sat down nearby. I asked him about working in customer service. Were there other reasons other than personal interest and being close to customers for doing it? He said, “It just feels right”.