[Minor edit: Be sure to read the comment thread below for a response from the agency CEO.] An employee of anÂ  Interactive agency sent out pitches to a number of bloggers this morning promoting a “viral video” that I wanted to share. Mind you, I’m not going to share the actual video because it’s sick, racist and violent. “Man makes racist insults, gets asphyxiated and beaten to death by young Asian girls and their parents while another man obliviously chats on his Bluetooth headset nearby.” If you’re into that sort of thing you can find it on your own. 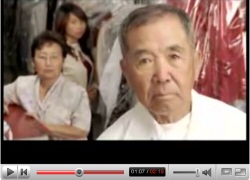 What I AM sharing is the pitch email and a few screen shots. I get so many pitches each day even though there’s nothing on our contact form to indicated we’re interested in being pitched. It’s so easy to just click delete and move on to the day’s work. 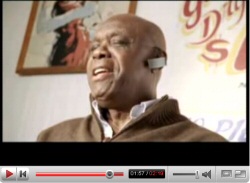 This one was simply not appropriate and while some would argue I am indirectly contributing to the video’s objectives of drawing attention to the product being promoted, I think this is too good an example of what not to do. 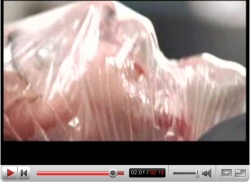 I did post my response to the pitch on Twitter, which was simply, “You make me sick”. Quite a few people replied with responses ranging from, “that is so wrong on so many levels” to “reprehensible as it may seem….I see a whole younger demographic finding that video hilarious.”

I’m not so sure I agree the target market for this product will find the video “hilarious”, but rather “desperate” and “disgusting”. I do believe such a video could be made to achieve the desired messaging and distribution without the macabre angle.

As a fellow marketing/advertising blogger I just wanted to let you know about a new viral video that is being launched just this morning by Aliph, maker of Bluetooth headset Jawbone. I’m thinking it’s going to be pretty controversial.

Here is the URL and a brief description: [Lee: You can find it on your own]

Aliph eliminates noise with their Yves Behar-designed Bluetooth headset Jawbone but the company’s making noise with a series of provocative, stereotype-busting films now circulating on the web. In this video from a series directed by legendary music-director Samuel Bayer (Green Day, Garbage, etc.) and guided by agency of record Anomaly, an offensive, suit-wearing loudmouth gets attacked by Asian girls at a dry cleaner after offering to “love you long time.” The result is thought provoking, unexpected, and, ultimately, shocking.

I’ll be checking your blog a little later this afternoon to see if you’ve deemed it post-worthy.

Looking forward to hearing your impressions!

Now you have my impression. If you’ve seen the video and are unsettled by it as well, perhaps you can leave comments on the blog above.