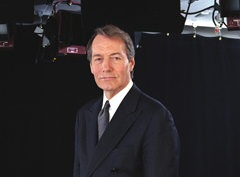 In the opening keynote at Media Relations Summit, the legendary TV journalist and interviewer, Charlie Rose, had the tables turned and became interviewee with the famous PR guru, Howard Rubenstein.

Rubenstein: Why are your interviews so revealing? How do you get your guests to reveal so much?

Rose: The thing about a story… Describes the recent news over the weekend about the Clinton campaign manager getting sacked. People that do what I do want to advance a story like that. Stories are about communicating the range of emotions that are important to people.

The world I live in is driven by relationships. It’s not who you know, but how you know them.

What I’m after is, tell me what you know, tell me what it was like. The engagement is what is likely to produce the response you’re looking for. Telling you maybe more than what they meant to. This is because it’s clear I have sincere interest, that I care, that I’ve done my homework.

Cites Bob Woodward – 40 years of relationships in DC. Cites Woodward getting some info from one person and then disclosing that to another person to get more info, and so on.

It’s important that people feel like they’re in a place where they feel comfortable to talk.

Rubenstein: Do people ever ask to cut things out?

Rose: I make an editorial decision. If I think it’s editorial relevant, then it stays. I also listen to my staff.

Rubenstein: Some people come into interviews with message points and rehearsals. I’ve never seen you “out to get someone”, only to get them to explain themselves.

Rubenstein: I think you’re quoted more than any other interviewer. You’ve interviewed so many famous people – Kissinger to Rupert Murdoch to Sophia Lauren (his fave). Why do you interview a relatively unknown person?

Rose: Some of our best shows were with people who were relatively unknown. Cites an interview with 3 Iraqi reporters.

Rubenstein: How did you go after them?

Rose: We were looking for people who can tell a story. Relates discussion with his (producer) We’ve had too many coprorate types on our show. A great guest is someone with opinions. I think of our show as a global conversation.

Rubenstein: What are the 2 -3 more interesting interviews?

Rose: There are 4-5 interviews that really resonated all over the world.

I say things like, “Take me to the moment ….” Recapture the moment, the experience”. If I can do that, we can get something that will be compelling and interesting.

My definition of my program is not my opinions, it’s to find interesting people and bring out their stories. Find out what they have to say.

Rubenstein: Do you have any advice for people wanting to get personalities on the Charlie Rose Show?

Rose: The most important thing you can do is show that you understand what they do. Charlie Rose is where you go when you want to talk. Understand the show – it is a reflection if Charlie and his curiosity – as well as input from his staff. Interested in biography, ideas, lessons.

Second – give us what you think might be helful. Don’t engage in “we don’t want to talk about this and that”. Don’t avoid television.

Most important. Don’t try and sell a product. Sell authenticity – realness. Try and make the person believable. Senator Clinton has done the best when she seemed real and done more poorly when she’s not.

Email is the best communication format.

Rose: The web site is a good example

Two things in the digital world I can mention: Social networking (MySpace, Facebook) as well as what Google’s doing with Search. The greatest thing is that the web allows us to gain exposure everywhere. Our archived shows are available for free online. That makes it easier for people to see consistency in commentary from interviewees.

Rose cites an interaction with a fan and when asked, how the fan knew of the Charlie Rose show, the fan said, “YouTube”.

Our single mission is to make our show and clips of our show more easy for people to use on the web site and more available around the world.

The digital revolution, in terms of what Rose does, is a great thing because he’s in the content business. And a lot of it. 17 years of interviews with some of the most interesting people in the world.

Rubenstein: What do you think about the ethics of PR communications?

Rose: I do think it is an issue. (Although, he doesn’t have day to day interaction with PR people). Keep the media person informed that you have their interests at heart. Not just the client’s interests.

Also, don’t insult out intelligence by sending things that are an “official line”. Spin or lying are just wrong.

The best PR people are advisors and consultants. They provide strategic advice. Make sure that the media target understands the client. Spin the media and they screw you.

Audience: Has anything ever happened on your show to cause you to be speechless?

Rose: Someone walked off. LOL. We’ve done 20,000 interviews. Bill Clinton 6 mo ago, left me speechless when talking about his book, philanthropy and politics. Clinton defined the sense of frustration they had about Obama at the time – essentially about Obama not being ready to be president.

Audience: What is the one interview that you didn’t get that you wish you had.

Rose: I would love to go to Rome and talk to the Pope before he comes to America. Chaney is one that I haven’t interviewed. I’d like to interview Bush again before he leaves office.

Other people Charlie Rose would like to interview include: Jasper Johns, Phillip Roth, Jack Nicholson, Johnny Depp, Stephen Hawking – artists and others.

I hope our legacy will be that you will be able to look over our conversations and see that it’s a pretty good reflection of the voices that shaped our time.

Audience: What’s your opinion of how the cosumer media is covering the presidential campaign?

Rose: I think it’s hurting the Democratic party – Clinton and Obama. “Should she” continue or quit is a not the question to ask. She’ll know. And it’s smart that Obama doesn’t play up to that.