The first session for me on day two of Web 2.0, “Creating a Coherent Social Strategy for Business” with Josh Bernoff and Charlene Li of Forrester, was one I’ve been looking forward to since I first read Groundswell. See my previous interview with Charlene Li on Groundswell.

Groundswell focuses on the social trend.

Groundswell defined:
A social trend in which people use technologies to get things they need from each other, rather than from traditional institutions like corporations.

Where are you on this scale?

Objectives are the key to successful social strategies not technology.

Josh relates a story of a retail client asking for advice on starting a community. Why? Because the competition has. The retail company didn’t have a good reason, or any reason for starting a community. Josh emphasises that you must know what you want to achieve in order to succeed with a social strategy.

First step is to understand the people. 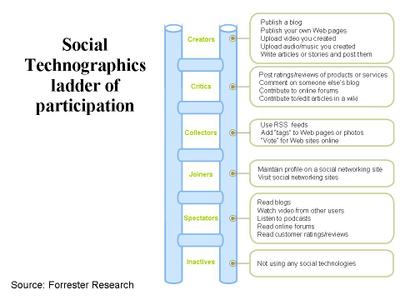 Josh shows the social technographics ladder: Creators, Critics, Collectors, Joiners, Spectators and Inactives. These groups include people participating in at least one of the activites monthly. Free tool: groundswell.forrester.com

Second step is to understand key roles and their groundswell objectives

Now Charlene Li takes the mic and talks about examples of objectives.

Del Monte actually developed a product based on feedback they received from the community. What would normally take months, took weeks. This is a great example of the Listening objective.

Next example is about Tampons. P&G created a site called BEINGGIRL.com with an “Ask Iris” feature where members can ask questions. Interactions were lightly branded.

Brides.com energizes brides with MySpace a countdown widget. People would put the widgets on their MySpace profiles and each widget has a solicitation to get the widget. Widgets enable enthusiasts to do the selling for you.

The next example is Best Buy’s Blue Shirt Nation – which is an internal community.

Another example is from Starbucks, called My Starbucks Idea. Customers can submit their suggestions. Basically an online suggestion box. What’s unique is that there is top down management support and visibility of the ideas. They can also respond to ideas that get implemented, giving customers feedback and recognition.

In all of these successful examples, the companies had specific objectives they wanted to reach.

Josh is back up and reiterates that when budgets get cut, programs that have specific objectives and measurements are the last to go.

One of the most difficult things to justify is a blog. Forrester put together a breakdown of the ROI for an executive blog. Estimates $285k first year cost, most of which, is time spent training the executive.

Total estimated first year value is $353k. Most of the value comes from press stories which are valued at $10k each. Support savings are also high at $69k.

Important to explain goals, what was done/implemented and impact on the organization.

Key to success for pragmatists:

Audience Q and A:

A: Where do you see this live in an organization?

Josh: Which dept in your company is responsible for the internet? The answer depends on the application you have. Marketing, sales, support. Focus on the objectives you want to achieve to decide where it lives. Eventually, all departments will be touched.

Charlene: You must absolutely be laser focused on your customer. Gives SW blog as focused on, listening to, thinking about and serving customers.

A: What are some strategies for measuring customer participation?

Josh: Has been doing some work with clients on this. Some are doing surveys, some do workshops. Cites an example of a media company that was targeting Alpha Moms. They thought the moms would like to do blogs and create content. It turned out, they would be more likely to be critics and not content creators. That is the kind of analysis every company should do with their customers and sub-segments of their customers.

A: From a corporate strategy perspective, how do we get involved, participate as a company in the places were these activities are occuring? Not creating your own community, but “marketing” within social communities.

Charlene: Cites an example with Tivo being transparend about who they were with a community and interacting with the community. Tivo also helped support the infrastructure of the community. They didn’t need to create a new community – they were able to tap into the 100,000 users of an existing community.

Josh: Cites an example with Ernst & Young that opted not to create a community, but to interact with Facebook by creating a careers presence. Top hiring exec for NA at E&Y watches and answers questions on the E&Y Facebook group.

A: What are tactics for romancing the naysayers? Person to person or “shotgun” approach?

Josh: Worked with a company in SF that had a group blogging. It’s a regulated industry so each post had to be vetted. Legal provided rules to follow and guidelines for communicating.

Another example is Forrester. They have their own sales and marketing efforts. Made sure when the book site was created that the branding people were aware so they wouldn’t be offended.

Charlene: Work on a person by person basis. Give the benefits to them individually.