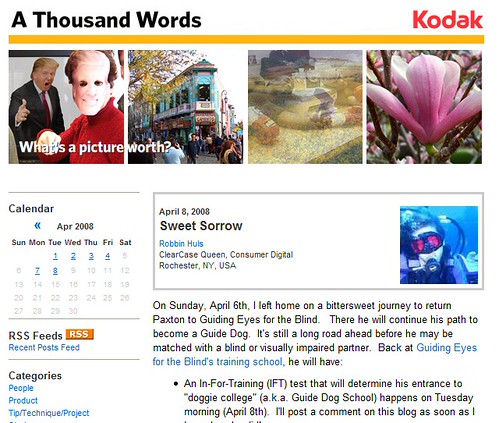 First up is Tac Anderson from HP, who shares a specific example of a tactical execution of a blog. HP has had bloggers for 3 years. 60+ blogs.

Example of using a business blog as a competitive response. Xerox announced a change in pricing. Charging more for the printer and less for the consumables – ink and paper.

The next day, HP blogger Vince Ferraro responded followed by analyst responses. Ensuing media coverage became more about HP’s response than the original Xerox announcement. HP was able to instantly get their viewpoint into the coverage by using a blog.

The post also ranks well on Google for phrases such as “solid ink vs laser”, “xerox solid ink printers”.

What was planned for:

After the post, both PR and Legal become more interested. PR has begun to pitch HP blogs on communicating stories.

None of this would have happened if they had not spent a year building content. Follow guidelines from legal and have training in communications policies from PR.

Next up is Jennifer Cisney who is Chief Blogger at Eastman Kodak, which she says, isn’t as exciting as it sounds. Kodak has 2 blogs. Jennifer showcases the 1000 Words blog.

The A Thousand Words blog is employee stories about photography. Subjects like what it’s like working at Kodak, using products, photo projects and tips.

Another Kodak blog is A Thousand Nerds which talks about innovations about Kodak products.

These blogs have helped Kodak enter the conversation and talk about the Kodak brand. Jennifer shared a post where she attached her Gorilla tripod to her dog’s collar and set it to auto timer to take photos – mostly of his bowl and the cat. It was picked up world wide by other blogs.

Unexpected side effect of having a company blog is to boost employee morale.

How do you get your company’s blog out there and noticed?
Write good posts. Be honest and open. Update regularly and know your audience.

Gives an example of mexican wrestler masks printed out on Kodak printers. Another example of a partnership with Slide.com allowing users to create slideshows with their photos.

How do you successfully talk about your products?
Use real life situations, relax and be natural. All feedback is accepted. Be responsive.

Get the most out of what you’ve got.

– Kodak received an Oscar for their film. They wrote blog posts to draw attention to videos taken of Kodak scientists as well as the CEO accepting the Oscar.

– Promoted being on The Celebrity Apprentice with photos of employees wearing printable Donald Trump masks and then had employees who were present for the taping of the show to blog about the experience.

How do you get the most out of your blog?
Plan ahead. Make it part of your marketing plans.

Inspires a passion for whatever your interested in. In the case of Kodak, it’s showing a passion for photography. Also recognize others that are passionate about the same interests.

How do you make your passion shine through on your blog?
Use your best assets! User your employees and your fans. Communicate with your readers, comments and linkers.

Last up is Robert Scoble who uses winelibrary.tv as an example of a video blog. It gets thousands of views and hundreds of comments. Promotes on Twitter as well as Facebook, LinkedIn, MySpace and others. Scoble says this site is a bleeding edge example of using technology to promote a business online.