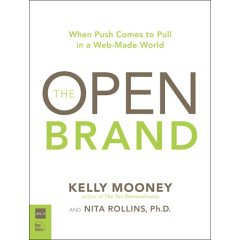 â€œFor the first time in the history of calculating the ROI of marketing expenditures, influence behaviors and patterns of the volume achievable only on the social web begin to offset the overall cost of marketing,â€ quotes the new book â€œThe Open Brand: When Push Comes to Pull in a Web-Made Worldâ€ by Resource Interactiveâ€™s President Kelly Mooney and Innovation Consultant Dr. Nita Rollins.

While not appearing on page one, this idea is certainly one of the most important, and likely most sought after skim through takeaways marketers (both on the client and agency side) will seek when first hunting for the knowledge contained within this book.

Mooneyâ€™s book reinforces what many savvy marketers have known for years â€“ that â€œcutting edgeâ€ will become increasingly synonymous with an embrace of the openness of the oceanic global marketplace â€“ strategically riding the waves, rather than trying to overbearingly control them â€“ and that this adaptation will be the strongest influence on marketing ROI.

The book begins with an excellent chart dispelling some long held notions of what companies have over the years been taught to believe, along with a non-condescendingly flipside, for example:

For those marketers and brands behind the times, now is the time to adjust your world view and, if necessary, position yourself as one of the elite â€œhipâ€ who have always been on the â€œOr Do You Believe?â€ side of the equation as one of the first to recognize the benefiting effect of early adaptation.

The book solidifies its core concepts by redefining the word “open”, by way of acronym “O.P.E.N.” â€œOpenâ€, a word long identifiable in the brick and mortar world with a sign indicating a purveyor was ready for business, has now taken on a completely different definition as our market has entered a phase where consumers expect to receieve what they want, when they want it, and always exactly how they like it:

Educatory concepts are nothing to we marketers of course, without the real-world tales to back them up.

For anyone who skips ahead to the case studies, there are several to choose from:

In the face of the evidence provided above, and even more overwhelmingly so in this book that the OPEN movement is more reality than fad, and that a proper understanding of this new movement will actually lead to increased marketing ROI and decreased marketing costs, why does the book also point out resistance?

Blame the word â€œhipâ€. This word was not chosen earlier lightly. It is a word as likely to turn off a traditional, (ie “popular”) marketer as the phrase â€œROIâ€ is to turn them on. And if itâ€™s one thing all the popular kids secretly hate, itâ€™s the hip kids.

To play off a high school analogy, an â€œin-reverseâ€ take on Robert Fulghumâ€™s time-honored book â€œAll I Need to Know I Learned in Kindergartenâ€ (where everything we need to know become good and upstanding individuals is learned in this formative semi-grade) let’s begin a new book to help illustrate this titled, â€œAll I Need to Know About Being A Jerk I Learned in High School.â€ 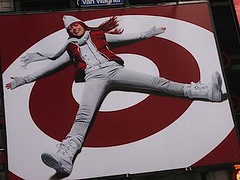 The phenomenal response to this blogger, as printed below read:

Good Morning Amy, Thank you for contacting Target; unfortunately we are unable to respond to your inquiry because Target does not participate with non-traditional media outlets. This practice is in place to allow us to focus on publications that reach our core guest. Once again thank you for your interest, and have a nice day.

Now, before I sported the coolest ever pair of Ray-Bans seen in my photo above, it was not uncommon for me to be rejected by the opposite sex, especially in high school time and time again. Shocking, I know.

The tone of Targetâ€™s response, and the consideration that their HQ is just down the street, makes me think Iâ€™ve probably met the girl behind the response.

Luckily, the book ends with a road map towards changed behavior, fittingly titled â€œThe Rules of the Open Road.â€

After all, anyone can change their view of the world or market â€“ and once accomplished â€“ not a one of these concepts will be difficult to implement.

By reading and adhering to the lessons of The Open Brand (and exploring each and every one of the 45 pop culture references above) marketers are well on their way to successfully navigating this path.