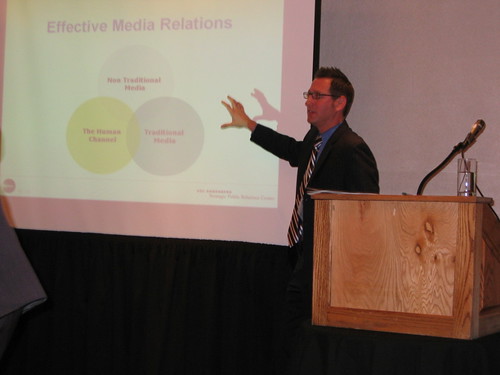 “Every company on earth, every client you have, every person you meet has to become involved in social media right this very second.  This is especially true if you are in PR.  If you are not sharing your messaging via social channels  – and I mean, like yesterday – you are hopelessly behind the times and yours, or your clients messaging, is likely to go nowhere.”

Is this really the case?  For those of us that have not been leveraging social media as heavily as others in our field, is the game over?

In the PRSA conference session Media Myths & Realities, Nicholas Scibetta, Global Director, Global Media for Ketchum let us know, thankfully, that those just getting started in social channels are not quite sunk yet.

Scibetta shared results of a survey begun in 2006 in partnership with USA Annenberg Strategic Public Relations Center that sought to learn the type of media consumes go to for information.

Surprisingly, with all the talk of the influence of blogs and social networks, overwhelmingly, traditional media still is overwhelmingly the media that the general populations consumes:

And while traditional media is declining in terms of consumption (each of the above by 6% since 2006 with the exception of local TV news which declined by 8%) and social networking sites are on the rise (8% since 2006) traditional media is not declining at the stark and frightening numbers we may be led believe, nor are social networking sites quite matching the Facebook fever we may be hearing.

That being said, there is a definite decline in traditional media – and a marked increase in social channels – in this case, much like we’d expect.

However, the pace of the decrease and increase allows PR professionals the benefit of time to plan, listen and strategize – prior to jumping in headfirst, eyes shut.

In terms of the question referring to channel credibility, the survey showed  – again, little surprise here – that media credibility is down across the board – and that word of mouth is seen as the most credible channel.

So, while traditional channels exhibit a great deal of mindshare, consumers prioritize a bit differently when it comes to major purchasing decisions.

For example, when the question was asked, “When making a purchasing decision with an environmental impact, where do you turn?”, word of mouth was among the most prioritized sources.

In regards to the last question, in terms of how are landscape is changing, the main finding pointed to a significant increase in social media channels – (again – not so rapid a growth to be feared).

So knowing that social channels are growing, and word of mouth is far and away the most influential channel, it would of course make sense to know that corporations are spending the bulk of their marketing dollars on…advertising?

So what’s the best solution for both groups? In each sense, simply to listen.

In the case of corporations, if consumers are telling you, via the results of this survey, word of mouth is a prioritized source of credible information, it should also serve to be a vital part of your marketing mix.

For marketing and PR professionals, while social media channels are growing and must be included – or at least considered for our mix – there is simply no reason at all to completely abandon every other channel to put our eggs into just this basket.

The Point of Connection, the overall theme of this conference, is shaping up far more to be the Point Where We Begin To Listen – not necessarily when we begin to speak.