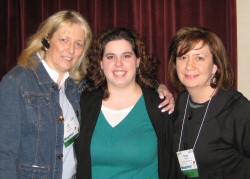 Note from Lee:  GasPedal and the blog council have partnered to deliver another BlogWell event (this time in Chicago) focusing on case studies from large companies on the topics of blogging, social media and online community building. I am pleased to introduce a guest blog post from Tonja Deegan, winner of a free pass from TopRank, who was a media sponsor of the event. Enjoy!

A common thread that wove through the case study presentations at BlogWell was that the majority of the time, someone within a company took a chance, started something small online to make a connection and watched it grow.

For Allstate, Lizzie Schreier went to the company leadership with the idea to communicate with customers online, possibly through a forum. The leadership ended up placing bets that she wouldn’t be able to get approval from legal. She started small – the forum didn’t even focus on insurance – but eventually built the site into an active forum and now has help from another employee and an agency.

The Mayo Clinic also encountered naysayers. When Lee Aase proposed a YouTube channel with videos from the clinic and patients, people said, “Isn’t that where people put videos of squirrels skateboarding?” The company began first by offering mp3 files to media, moved to a corporate-branded space on YouTube and now has Flip recorders and a new sharing site just announced at the conference.

When H&R Block began experimenting with social media, they created a fictional character, Truman Greene, with several videos as the online fanatic for H&R Block. They quickly found that it did not generate the interest they were looking for compared to when they did what people expected them to do: answer tax questions.

In addition, all of the companies that I listened to also have corporate Twitter profiles (@mayoclinic, @hrblock, @allstate, @uscoastguard). The willingness to test and adopt new technologies to further connect with customers and others is a common trait with those that really understand the power of the consumer.

Large and small brands in the audience asked questions that brands everywhere continue to ask: What if something goes wrong, what if it’s not approved, what if we get sued, what if we get made fun of, what if …  And the secret answer to those questions is to do what each company at BlogWell did when they tested online engagement, found out that it works and continue to spread it into more networks and technologies.

As Paula Drum at H&R Block said, ROI is “Risk of Ignoring” social media. When you nurture and communicate with your online community, your company will reap the rewards of brand recognition and increased brand awareness.

Tonja Deegan is the digital and social media director at Airfoil Public Relations and writes at:  http://cleartheair.airfoilpr.com.

Thanks for the great coverage Tonja!