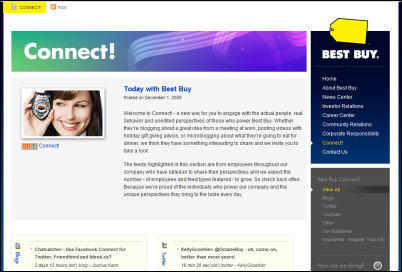 Whether you think “social media” is an overused term (yes, it is) or it’s a fad, or the evolution and revolution of the web, you don’t have to look far anymore for abundant examples of how companies, organizations and the U.S. Government are going social.

Social media can involve a variety of platforms and media ranging from social networks to blogs to image and video sharing. These forms of social technologies have been in use for years, individually and together in the form of integrated social media marketing campaigns or social media newsrooms.

A few fairly recent examples of companies using several social media types together include:  the Ford Story web site created in conjunction with Ford’s efforts during the auto industry’s bid for financial help from the government, Sony Electronics Social Media site which is a revamped version of the Sony Electronics blog that includes photos, video and networking, and Best Buy Connect, which I’ll describe in more detail below.

The objective of Best Buy Connect is to showcase the people, behavior and unedited perspectives/ideas of those who power Best Buy. It humanizes the brand, increases accessibility and fuels transparency. This can affect current and future customer perceptions as well as future employees.

I talked to Dawn Bryant from Best Buy PR about the Best Buy Connect project in December and she said, “If people outside of this company could really feel the culture and drive that makes this place what it is, we can strengthen our reputation, goodwill, and ultimately grow our talent and grow the company. The beauty of that is that we didn’t need to create anything new, people are doing it and we don’t want to control it, we simply want to make it easier for the rest of the world to find the energy and human-ness”. 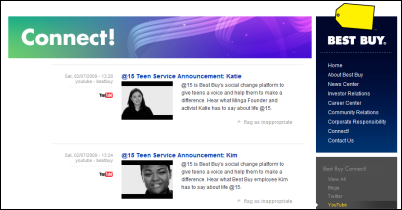 The site aggregates employee blogs, Twitter, YouTube and other sources including Tweets and blog posts from Barry Judge, Best Buy’s CMO.  Best Buy employees are already active with the social web, aggregating sources is good for many reasons including creating a central location for employee insights in different media as well as providing additional flavor for the personality of the people that make up the company – at all levels.

A few tips of advice from Best Buy on a social media aggregator:

During the current economic situation, this kind of transparency is particularly interesting since most companies are probably tempted to control “the message” more now than ever as they deal with lower sales, staff changes & layoffs and inevitable belt tightening. I think by aggregating multiple sources, Best Buy is giving interested readers multiple stories to consider, which gives a broader picture of the organization.

Besides Dawn Bryant, who helped out a great deal with information for this post and is now working on her own PR consultancy, I’ve interviewed Gary Koelling from Best Buy, co-creator of BlueShirtNation and GiftTag with Steve Bendt who I have also talked to and I can say from those interactions and the social participation by corporate and employees, Best Buy really appears to be one of those companies that’s walking the talk both in terms of their public social media projects and the culture of the organization.