A big question for marketers that want to connect with businesses on Twitter is that they often don’t know where to look.  Part of the rub is that Twitter is predominantly a service used by individuals, not companies.   While you can use search.twitter.com advanced features to find individuals using specific criteria, it can be more productive for finding companies or commercial users of Twitter via a managed list. 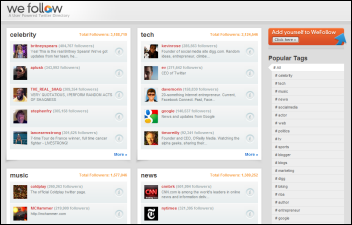 WeFollow – Kevin Rose from Digg started this user powered directory of Twitter users organized into categories with rankings based on the number of users. Inclusion is based purely on users submitting themselves by Tweeting an @wefollow and hashtags describing what 3 categories to associate that user with.

So much for taking time off from the conference and speaking drill. February was a sweet reprise from a whirlwhind tour of speaking events in 4th quarter 2008. Now February is over and March starts the conference schedule for TopRank Online Marketing once again. Here are the conferences I’ll be speaking at or just attending over the next few weeks. If you’re attending any of these, please follow @leeodden and let’s connect.

On March 12, 2009 I will be presenting on two regular sessions covering Twitter and PR SEO as well as a Super Session on social media marketing.  Here are the details: 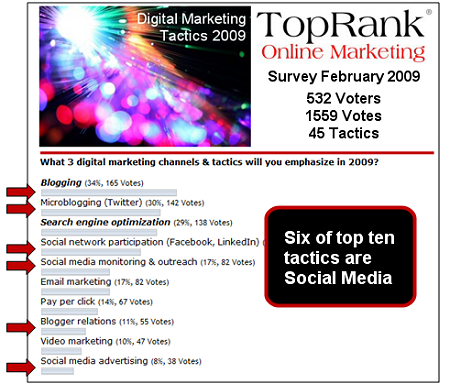 With concerns over the recession and its impact on marketing, we decided to run a TopRank Reader Poll to discover reader (and their networks) preferences for digital marketing tactics in 2009.  Companies world-wide are cutting costs as well as looking for creative, high impact and accountable marketing.  Our amazing readers both on Online Marketing Blog and followers at @leeodden helped uncover the top tactics.

Over the past 11 days 532 readers have cast 1559 votes for their 3 top digital marketing tactics for 2009 with Blogging, Twitter and Search Engine Optimization topping the list.  Equally interesting was that out of the top 10 tactics, 6 fall into the category of Social Media Marketing. See the full list below along with other statistics about where voters came from as well as info about the readership of Online Marketing Blog.