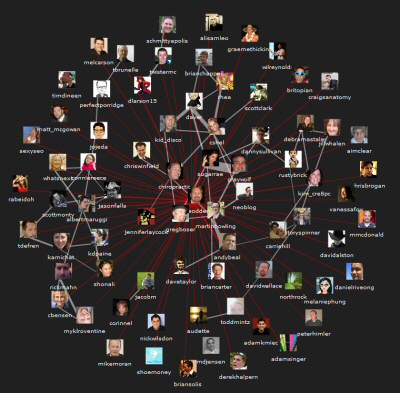 Anyone actively involved (in a productive way) with social media as a marketing, influencer marketing, PR or customer service communications channel started somewhere. Since it’s a social activity, that means a high degree of influence from others already mastering the channel. It’s no mystery that one way to quickly gain knowledge about and adapt to something new is to find, listen to and engage those that are already there – or at least further along than you are.

It’s not always a linear thing though. There are plenty of directions to go in the social media space and learning from others via participation and collaboration is where the real productivity in acquiring knowledge comes from. Different people focus their attentions, efforts and expertise in different areas and therefore, offer a different set of influences. A herd mentality towards social media expertise does not inspire innovation.

You can call it whatever you want, social media, social web, social this and social that, but in the end it’s not just about cliches like “conversation”, “transparency” and “participation”, but “marketing”. Not marketing in the traditional sense of course, but businesses communicating with customers in a way that ultimately produces many outcomes, one of which is revenue for the business.

I started blogging for TopRank Online Marketing 5 years ago and in the process of advancing my personal knowledge of social media as a marketing and PR discipline, my early influencers came from a variety of backgrounds and expertise as well as from personal experience and testing. These are people who shared ideas at large or to me specifically that had an impact on how I’ve pursued blogging, social media PR, measurement and RSS:

Some of these early influencers (for me) are people I have come to know better from interactions online and off. Others were innovative for their time but maybe not so much so now and I really have no connection with them. There’s a whole set of people that have been an influence over the past 2 years or so like @chrisbrogan and many others not listed here. I’ll likely do another post about that.

The funny thing about the whole social media trend is that there are many, many people who have jumped into the social media space and thrown up consulting practices like lemonade stands, parroting what many of the pioneers have been saying (like concepts from Cluetrain Manifesto).  The trend is similar to when SEO started to gain momentum and web design/development before that. How many times have you heard someone say, “My brother in law has a computer and can do (insert Design/SEO/Social here)”.

There are opportunists for sure, but there are also some very smart, creative people making amazing headway innovating on their own and mashing up and building upon what others have done. That is the social media way. Making something that already exists, better.

Collaborating with other like-minded enthusiasts to create, inspire and improve.  There are a few concepts TopRank has promoted pretty enthusiastically in this regard (Push Pull PR, Digital Asset Optimization, Social Media Roadmap) that others have built upon and promoted.  We’ve done the same thing with others’ ideas such as social media optimization and online reputation management. The benefit of multiple people contributing to such concepts is to further awareness and knowledge for those that will benefit. Increased awareness means more influence as well.

Who were your early social media influencers?