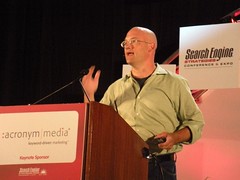 He dives right in and shares a story about HSBC, which  launched a program to acquire new accounts from college students. In doing so,  some less-than-great details about the program like extra fees started to enraged those who had signed up.

Instead of students being upset, but having no way to congregate, an upset student decided to rally other students via Facebook starting a group called ‘Stop the Great HSBC Graduate Rip-off!!!’.

Before the offline rally could happen, HSBC stepped in and tried to right the wrong specifically because – as Shirky says  – “Their customers had become organized. Facebook has become not only a social network, but a site of organization.”

The fusing of delivering information and the coordination of people makes Facebook different than traditional media. Aside from the value of the URL itself, there is additional value in allowing those who view the URL to connect.

According to Shirky, we are in the largest information transition in human history since the printing press, which industry pundits have been saying for years. But Shirky goes on to explain that the printing press, telephone and video didn’t allow the creation of content AND the creation of groups who could share the content. The many to many has been missing, until now (or really a couple years ago).

The Internet is the first medium that is inherently good at supporting groups. What this provides is organization without organizations. Groups of people can come together and coordinate themselves without a manager telling them what to do and when to do it.

The next big change is symmetry. Media has been very asymmetrical. A television station is very large and expensive to run, while a TV is relatively inexpensive to purchase so the communication is one-way.

Cell phones for example, are different. Shirky illustrates the point like this: “When you buy a cell phone, no one asks you if you just want to talk or listen. You get to do both.” A phone has made the average user the new Clear Channel allowing for multiple feedback loops.

While technology is setting the stage for the communication, it doesn’t cause it. Tools only change society when they are accompanied by motivations.

Shirky now transitions to talking about Josh Groban and how his audience of young teenage girls and their grandmothers have gathered online because there is no radio station that addresses that age range.

The audience, better known as the ‘Grobanites’, decided to come together pre-show to raise money for charity. From each show, they typically raised a few hundred dollars. Then the group transitioned the auction to Groban’s website and in the first run raised over 16,000 dollars. So, what’s going on? What is making the fans come together and work toward a cause?

They came together because they wanted to and they had the tools to do so.

The 3 intrinsic motivations of humans are often squashed by paying that same human for executing the same tasks they would have done for the ‘love of it’.

We are in a time of mass-amateurization. Amateurs are not just sloppy professionals, but rather they do things in different ways and for different reasons. Why are we surprised that users join together and connect online?

It’s because we have two widely held disbeliefs.

The first disbelief is that paying someone to do something creates better results. The second  is that because we observed couch potato consumption at the end of the last century, we thought assumed that’s what everyone wanted.

Not necessarily true. People didn’t have formats with which to share. Now they do and we share all that is important to them. This is different than past media formats where folks are told what SHOULD be important by gatekeepers.

The point of the wolves is not the sold tshirts (although that’s a big bonus) but that when people are allowed to share they will, especially when they are convinced that the wolf tshirt caused women to come up and talk to them. The convincing user review – true or not – was compelling enough to motivate others to share and even buy.

At the end of the day, the motives are the same (old and young), the difference is that there are tools to empower sharing that didn’t exist before. We shouldn’t be surprised by the output, it’s what humans do.

In summary, if you get user motivation right, then you’ve got something. It’s not about behavior, but channeling existing behaviors and letting people do what they want to do, but before didn’t have the tools to make it happen.

Look for more on TopRankBlog.com as Adam Singer and myself cover SES San Jose 2009 this week.