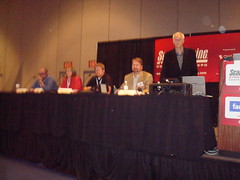 Black hat techniques have long been criticized in search marketing. Some claim that these black hat practices have quietly been practiced in social media for years.  Others claim that black hat and white hat are meaningless terms altogether.

With the rise in popularity of social media among larger audiences, the idea of black hat practices are being called into question.  Where will the lines between white hat and black hat be drawn?  Is it even possible to do this?

There are dangers for both companies and individuals who engage the social web with unethical or black hat practices, and can include such risks as loss of reputation, banning from web services/networks and even PR backlash.

Dave Evans, VP, Digital Voodoo moderates this panel (including TopRank Online Marketing CEO Lee Odden) which will draw conversation at SES and beyond:

Dave opened by talking about wanting to have a larger conversation surrounding the role social media plays in business.  Dave believes social media is becoming a dominant channel that people make decisions in.  With this said, ethics/authenticity and the idea of white hat and black hat will come into play more and more in the future.

Several classic examples were given of companies being inauthentic in the social web including Dell, Walmart, and others who suffered the wrath of negative fallout. Following were questions from the moderator as well as the audience, answered by the panel as a whole.  I pulled together the conclusions from each answer, as the conversation went back and forth quickly:

The intention of being black hat is getting better results, faster.  It’s a matter of managing risk:  agencies and consultants are representing the brand’s marketing efforts, so representing the brand properly is key.  Companies need to be ethical, honest, transparent and understand the risk if they are going to get involved in any tactics that may be pushing the envelope.

What are the rules?

It’s not what’s right; it’s not what’s wrong:  it’s about who you are having a conversation with that defines engagement.  It’s about each community and what that community defines what the unwritten rules are.  Each site or service also has a TOS, but the community/culture are what end up shaping the content and appropriate engagement.

Create good content that gets links and attention.  Don’t spam any of the social sites with news just to do it, it won’t work.  Be honest and authentic and don’t go just for short term gain, be in it for the long haul.  It’s the community that decides what it’s good or not at the end of the day.

How should agencies interact?

Get the actual product developer involved, don’t let marketing or advertising people ghostwrite forever – instead act as a consultant to help those experts.  Empower and enable the company to succeed on their own.  Ghostwriting may ultimately become unsustainable, whereas if you can foster a culture of participation and contribution, you will thrive.

What is the future of PR?

PR agencies need to evolve into the true counselors they should be and function from a strategic perspective.  It removes them from purely tactical initiatives and elevates their value.  PR people getting involved in social media properly will open up a new world of opportunity to function at a higher level than they currently are functioning.  Put the people out front, and help them use the platforms articulately and correctly and continue to consult, coach and develop long term strategies.

How do you find someone internally that can function as a trusted, authentic brand advocate?

If you don’t have a brand that people want to engage in, don’t go into the social web.  You have bigger problems than social media.  Find talent that is interested in contributing from the start that is genuine.  Find people who are passionate about the subject matter and put them out front.  Show client results of what this can do tangibly to motivate them to put people out front in the first place and invest their time – if done properly they will see this is highly worth the effort.  But never feel the pressure to be utilizing social media if you or your company aren’t very social.

What about the idea of automation?

Automating following/friending people for clients can potentially destroy their Twitter presence – they can potentially ban you for using auto-follow scripts.  There is a risk involved.  Automation is the crux of much of the white-hat black-hat issue, however there are always potential repercussions.  Web services don’t want to see them.

Automation tools in the right hands can be effective, useful and add value.  In the hands of the wrong people they can be spam.  It is not the tools or technology that makes any strategy or tactic positive or negative, it is application.

What about social media spam?

Communities are surprisingly able to self-police and “vote down” the content that they see as spammy or over-promotional.  In many communities, the users take care of spam naturally.

Media and bloggers should spend time finding out what will work on the sites, rather than figuring out ways to game those systems.  A potential strategy is to build a powerful account on those sites and a relationship with other site users.  Then other users will be more likely to notice you as a member of that community.  Of course, creating articles worth sharing is the best strategy in creating content that spreads organically.