I noticed someone using Google suggest in another story today (honestly forgot where) and thought I’d see what Google “thinks” about social media. Then I tried SEO. Not surprising. Funniest of all, considering Google’s business model, was advertising. 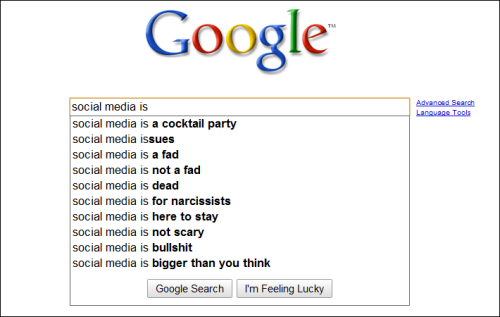 Pretty telling when you think about it. Of course this isn’t what Google “really thinks” about social media, it’s Google’s response to search queries and effort to predict what we’re really searching for.

Google Suggest works by drawing from searches by other Google users, sites in Google’s search index, and ads in the Google advertising network. If you’re logged in, Google will use your search history to make suggestions. It can be a handy search tool. It can also be revealing.

But, that’s not as interesting as viewing these screen shots as what Google “thinks”, so let’s continue: 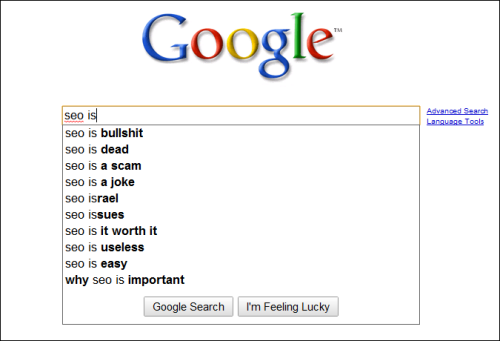 Whoah, let’s turn off the SEO hate, OK Google? 🙂 In case you’re not a hater and curious about search engine optimization, find the truth about SEO here and why ongoing SEO is important here.  The reality is, Google is the recognized leader amongst the few remaining search engines in more than market share. They’re also the pioneer (thanks in part to Vanessa Fox) and leader in providing webmasters with SEO tools and insight via Google Webmaster Central. 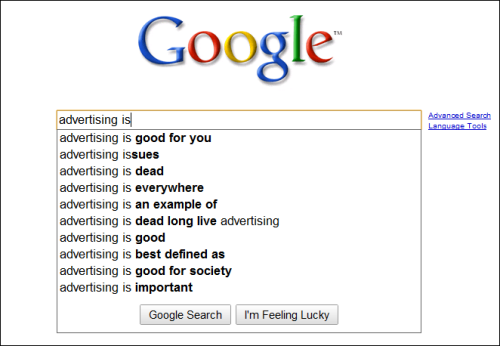 What does Google Suggest think of your industry?