eMarketer is one of the most cited resources for internet marketing trends, so when I received some tasty predictions for 2010, I thought they were too useful to keep to myself. These insights include future monetization models, the effect of transparency on advertising, social and search, mobile, social commerce, public relations, social advertising, Twitter, video and mom/pop internet usage. Enjoy! 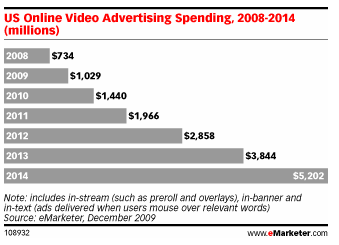 Further support for video ad growth will come from sites that offer a deeper catalog of professional video content—such as whole seasons of TV shows (both present and past), exclusives of entire sports events and other premium content. Such offerings will attract larger audiences. But in order to maintain the costs of deep-catalog video, the sites and their studio and TV network partners will need to introduce hybrid plans that combine subscription fees with advertising.

More Transparency on Websites Could Undermine Online Ad Efforts
Effective ad targeting depends on fresh and abundant data about Website visitors—what they’re doing, where they’ve been, where they go. However, both consumers and politicians are increasingly concerned about privacy issues.

From consumers, that will mean greater use of ad-blocking software or browser add-ons and more deletion of cookies. Consumers will be most sensitive to data gathered on social network sites, because of their personal nature.

For publishers and search engines to get in front of these changes will require greater transparency than ever before, such as Google’s new Privacy Dashboard. In 2010, we will see more Websites let users know what data is being kept about them and give them options to remove data or prevent it from being accumulated. However, such transparency alone will undermine online advertising efforts. That means publishers will also increasingly need to make clear what the trade-offs are for accepting online advertising—the free content, the quality of the content, the basic value exchange.

Social Plus Search Will Equal Better Results, More Ad Opportunities
Search will get more social in several ways: by including real-time content in results (e.g., Twitter posts), adding information from social network friends to results, and using collective information from other Web users to hone search relevance. By using social data to filter search queries, search engines will hope to deliver even more relevant results and more effective advertising. These trends will yield new ad formats that may incorporate friends’ viewpoints or interactions directly into the ad—and will raise new red flags among privacy advocates. Those search and social sites that get ahead of the transparency curve will tend to gain more consumer mindshare than those who operate under a heavier cloak. 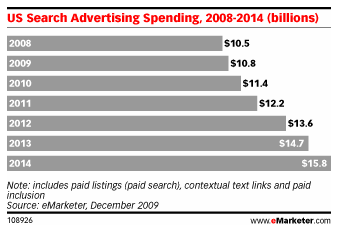 Another key change to speed up in 2010 will be more video results as part of general search queries. That will help drive the greater traffic marketers will increasingly expect as a trade-off for the continued high CPM costs of video ad placements.

Mobile Commerce’s Time Has Arrived
It is eye-catching when a consultancy revises a market forecast upward in the midst of an economic downturn. That is exactly what ABI Research did with its forecast of mobile sales of physical goods in North America. In January 2009 it projected m-commerce sales would reach $544 million this year, up 57% over 2008—impressive in its own right. But in late October, ABI upped its forecast, saying sales would top $750 million in 2009, a whopping 117% annual growth rate. M-commerce’s time has arrived, and it is an easy bet that sales in 2010 will pass the $1 billion mark.

Whereas consumers once limited their mobile phone purchases to downloadable ringtones and games, today they are using their devices to buy books, apparel and other items associated with online shopping on a PC.

Retailers Grapple with Measuring Social Commerce
A number of major retailers have established a presence on social media platforms such as Facebook and Twitter. For now, retailers are intent to learn from these experiments and are not too concerned with driving e-commerce sales. Building brand awareness and a solid fan base and generating leads have been deemed sufficient. But in 2010, retailers will become more serious about trying to measure social media’s impact on sales. One question retailers will grapple with is how much a large fan base translates into sales or brand loyalty. 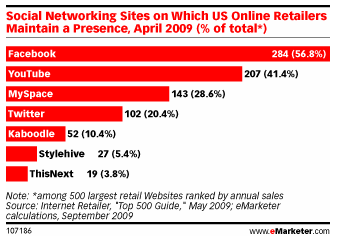 Mobile Is Moving Into the Mainstream
Although mobile usage is firmly entrenched among consumers, marketers still view mobile as an emerging channel, hence the long-running (and always unfulfilled) expectations about the “year of mobile.” 2010 promises to be a little different. Aided by a flurry of acquisition activity, an influx of venture capital funding and growing brand adoption in the latter half of 2009, the year ahead will see mobile continue its shift toward the marketing mainstream.

Mobile ad spending will rise from $416 million in 2009 to $593 million in 2010 as more brands and agencies integrate mobile into their marketing mix. And if not an outright arms race, Google’s $750 million purchase of AdMob is certain to prompt greater interest in the mobile space from agencies, brands and media companies alike. 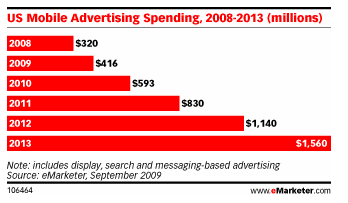 The fusion of mobile and social and the appetite for apps (among both consumers and brands) will continue unabated. In fact, location- and social-aware apps and utilities will be a key avenue for brands looking to engage consumers on the go. Cheaper smartphones and smarter feature phones will help marketers bridge the gap with consumers, but the onus is still on marketers to provide consumers with a measure (and measurable degree) of utility, relevance and entertainment.

Earned Media Takes Center Stage
Marketers will demand better ways to manage and measure the impact of earned media—the additional unpaid exposure a brand gets when consumers share about the brand online. Agencies will need to establish earned-media goals for every paid-media online ad campaign.

Social Ad Networks Will Expand
Expect more momentum—and regulatory scrutiny—behind advertising that is targeted based on information from social network user profiles. News Corp.’s Fox Audience Network (FAN) and services from startups 33Across, Media6° and others are already up and running. Meanwhile, some advertisers, such as Discovery Channel, have tested ad formats that are personalized on the fly by using Facebook profile data.

Twitter
It doesn’t take a crystal ball to guess that 2010 will be the year in which Twitter turns its focus toward building its business. So far, it has concentrated on audience growth, and by any measure it had a spectacular year. (eMarketer estimates that Twitter’s US user base tripled to 18 million in 2009.)

The questions now are: What kind of business will Twitter build, and will it succeed?

The revenue streams that have been discussed include paid corporate accounts, celebrity authentication and temporal search. Of these, search seems the most realistic as a revenue generator. There will be formidable challenges, however: After all, how does a marketer insert itself into a short, time-sensitive conversation without disrupting the flow of that conversation and alienating the user?

It’s not clear how, or if, Twitter will overcome these obstacles, but co-founder Biz Stone offered a tantalizing hint when he told Reuters that the company has a novel form of advertising up its sleeve. Expect Twitter to roll this out in 2010 as the cornerstone of its temporal search business.

Another thing to look out for is a possible Twitter IPO. This appears a more likely avenue than an acquisition, which loomed as a possibility at this time last year.

Online News Content
Media companies are at the center of a fierce debate over how to best monetize digital content. In recent years, they swung from one extreme to another—first charging the consumer for access to content, then opening the floodgates to free, ad-supported content (with a few notable exceptions).

Now, some media entities with premium offerings are again contemplating paid-content experiments. As these play out in 2010, we’ll see what works and what doesn’t. Our prediction? Consumers will resist paid systems, and competitors will capitalize on the negative sentiment with ad-supported content. In the end, there will be islands of paid content (The Wall Street Journal, The New York Times) and hybrids of paid and ad-supported models, but on the whole, the digital media landscape will be predominantly ad-based.

Digital Video Convergence
One of the keys to transitioning the US home video audience from DVDs to digital streams and downloads will be the emergence of technology that bridges the gap between the computer and the TV. The Consumer Electronics Show in early 2010 will usher in TVs with direct Internet connectivity, or with on-screen access to content portals such as YouTube, Blockbuster and Netflix. As online video becomes intertwined with the living-room TV experience, download and streaming services will take on a prominent role in the home entertainment ecosystem.

Look to the 55+ Age Demographic for Internet Usage Increases
Internet usage will continue to rise, as consumers find more ways to access the Internet. The continuing proliferation of laptops, smartphones and Internet-enabled TVs, MP3 players and gaming consoles will be the main force behind this trend. Teens and young adults are already active Internet users with many devices. The change will be seen among adults ages 55 and older, many of whom have always had an interest in consumer electronics and now are discovering social networks and other media.

Broadband standards in the US will be redefined by the Federal Communications Commission (FCC) in February 2010. The FCC’s current benchmark—which eMarketer uses—is an Internet connection of 200 Kbps in at least one direction. That falls an order of magnitude below global averages. The US does not even make the top 10 list of global “broadband leaders,” which measures household penetration and quality of connection. eMarketer will update its definition of broadband following the FCC’s decision in February 2010. The change may substantially affect estimates of US household broadband penetration, if cable and satellite connections—the dominant forms of digital broadband—prove slower than advertised. 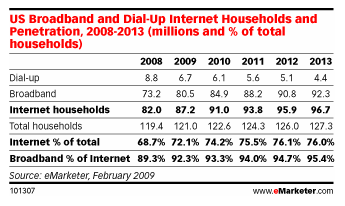 Now that you’ve had a chance to read eMarketer’s predictions for 2010, what are some of yours?  TopRank will be posting 2010 Social SEO & PR predictions next week.