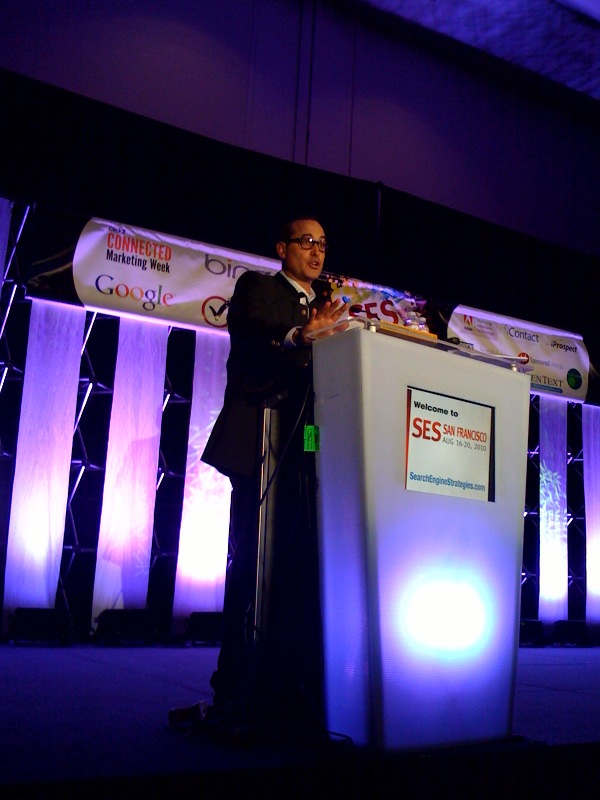 BJ Fogg, Director, Persuasive Technology Lab at Stanford University gave the opening keynote on day 2 of Search Engine Strategies San Francisco.  BJ is perhaps best known for promoting the concept of “captology,” a word he coined to describe the overlap between persuasion and computers.

In his book, “Mobile Persuasion,” BJ proposes the theory that the mobile phone will soon become the most powerful channel for persuasion, more influential than TV, radio, print, or the Internet.

A visual explanation of captology: 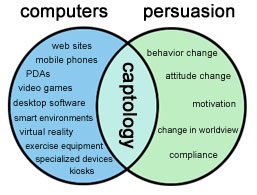 Following is a summary of BJ’s key takeaways from his keynote – Hot Triggers: The Power to Change Behavior:

The other day, BJ was in his office at home checking email and an email came across with a message that he had been tagged in a photo on Facebook.  He thought “awesome Facebook, I’ve been tagged in a photo.”  He went in and checked it out – but got lost in Facebook and spent a lot of time there, more than he planned.  How did this happen?  He was “triggered.”

More and more, technology can deliver these triggers at the right time in a way that can be measured.  If you look at Facebook, for example, as a platform that triggers behaviors you’ll notice they have evolved the platform in a way that does this.  Facebook is (love it or hate it) the #1 persuasive technology of all time.

BJ taught a class on Facebook a few years ago and it was all about getting students involved.  In 10 weeks and with no budget, they were able to create student project applications which attracted 16 million organic users.  Their success was due to putting hot triggers in the path of motivated people.

What triggers via Twitter?  Short links being shared of the best information.  If people are following you, they are interested in some level in your content.  Email is the grandfather of hot triggers.

Today’s tech dramas are all about control over the hot triggers – all companies want to be the ones who have that power.  The cycle is as follows:

Older platforms offer opportunities for new.  Will new platforms like Foursquare become successful?  We’re not sure yet, but you know you’ve got a platform when people pay you to put hot triggers in the path of users.  It’s true for Google – look at AdWords for a simple example.

The landscape of behavior change is messy, convoluted and confusing.  In the social sciences, things are messy and this is a reality.

The question is:  what actually motivates people?  The good news is that most humans are (fairly) predictable.  It is the context surrounding us which makes us seem complicated.  A lot of psychologists might think I’m wrong, but it’s my theory.

The 3 dimensions that motivate people:

If you try to motivate too much, it gets ugly and can backfire.  Use the lightest touch that works for success.  Example companies using this well are eBay feedback numbers or LinkedIn connections.

MAT is the model:  motivation, ability and trigger.  All three must be present at the same moment for behavior to occur.  If one is missing, behavior will not happen.

Also a key point:  increase ability by simplifying, not by training.  Making behavior super simple is how you’ll achieve success.  Make it so easy people can’t move forward without doing what you’re trying to do.

Simplicity has the following elements:

The user needs to be motivated and able to do what you asked them to do, but that’s not enough.  You need to have a trigger as part of the path.  Live with this concept, look at behaviors in your life and try to understand behaviors in terms of the MAT model.  It’s not just accurate, it’s a practical way of looking at the world.

Technology always changes, but human psychology stays the same.  Study human psychology in tandem with technology so you’re able to recognize how to achieve results.  Consider what’s working in successful platforms from a sociological standpoint and how can you integrate them into your projects.