The Winning Tweets from TopRank  Online Marketing Ticket Giveaway for the 2010 MIMA Summit:

@danmonfre: Justin Bieber is NOT performing at this year’s #mimasummit He is being replaced by @garyvee and @baratunde http://tprk.us/mima-2010 @TopRank

Congratulations! See the Tweets that received the most votes at:  Winner: 2010 MIMA Summit Free Ticket from @TopRank

The 2010 MIMA Summit being held next week 9/27-28 will feature keynote speaker Gary Vaynerchuk of Wine Library TV and author of Crush It! (review). Once I heard @Garyvee was speaking in Minnesota I hoped to do a pre-event interview, but it didn’t work out.  Two years ago, Geoff Livingston introduced me to Gary at Blog World Expo and while I wasn’t familiar with who he was yet, my first impression was that he had a lot of energy and could pass for Joe Pesci’s nephew. 🙂

However, after people like Brian Solis and Jason Falls pointed out the amazing work he was doing, using social media to promote his business, I made sure I was in the front row to see Gary give the keynote presentation at Affiliate Summit West in 2009 (photos above). I liked his raw, “tell it like it is” presentation. That style of speaking in Minnesota will either be received as a nice kick in the pants or it could be met with indifferent silence. MIMA members are smart and can also be a tough crowd, so we’ll see.  I for one, am looking forward to it. 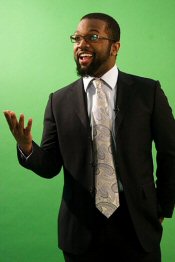 This year’s MIMA Summit also features Baratunde Thurston from, amongst his numerous projects and media involvement, The Onion, for the afternoon keynote. I guess two years ago was the time to meet today’s social media rockstars, because it was at my first SXSW in Austin, Texas that I met and had lunch (with a group) with Baratunde.  Unfortunately, I didn’t take a photo then, but found the handy glamour shot to the right on Flickr, along with many other great pics of Baratunde.

For a good sample of Baratunde’s presentation style, check out this video from Web 2.0 Expo: “There’s a #Hashtag for That” where he talks about some pretty amazing experiments with Twitter.

I’d expect both keynotes to be nothing less than thought provoking and entertaining. There’s a great lineup of speakers in the breakout sessions as well, which makes the MIMA Summit one of those events in Minnesota that you won’t want to miss.

Except you will miss it if you don’t have a ticket.   TopRank Online Marketing has purchased a corporate table at the MIMA Summit for the past 3-4 years and we usually reserve 1 ticket for a giveaway. This year is no different.

In a test of your micro-content writing skills, all you need to do is post a creative tweet using ALL of the following:
@TopRank @garyvee @baratunde http://tprk.us/mima-2010 #mimasummit

That’s 64 characters used for the message leaving a generous 76 characters for your inspired Tweeting pleasure.  We’ll pick the best Tweet by Friday 9/24 end of day 5pm Central. Oh, and getting ReTweets is not required to win, but might help get your tweets noticed more often 🙂

The winner will be announced on this blog post.