Social Commerce is a very hot topic right now with numerous blog posts, articles and even a few events focused on ecommerce and social media.

Adding ecommerce functionality to social sites is something that I’ve wondered about for quite a while:

“What I’d like to see more of is the availability of basic ecommerce functions as plug ‘n play options with major blog software packages. Blogs are good for business, big and small and I think there’s a lot of opportunity for business and value for consumers with ecommerce blogs.” Dec 28, 2005.

Too bad I wasn’t more of an advocate for social commerce since, but then again, consumers haven’t really responded well to shopping implementations with social media sites until recently, if at all.

Overt marketing messages have not traditionally been very welcome within social channels but as more brands become involved, consumers are expecting more than being able to comment, rate and share.

When considering the question of ecommerce and social media, I think there are two fundamental approaches to consider:

Examples of this are abundant now, especially with the addition of Facebook Like buttons on shopping sites and the ubiquitous social news, bookmarking and Tweet this buttons. See a great pair of jeans on Levis.com? There’s a Facebook Like button there to share it with friends, to get opinions or just let them know what you found. The Digital IQ Index Specialty Retail report (download pdf) from earlier this year found: “Retailers who currently host the “like“ button on their site demonstrated 80 percent higher average three-month traffic growth.” 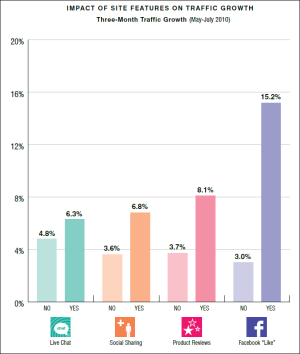 Other social features that have long been in place with ecommerce and shopping sites include ratings and reviews which are well entrenched in certain industries like travel & hospitality. Adding links to social sites a company is active on is a pretty common feature for services like Google Places.

Plus servies like Groupon adds an entirely different angle to social and commerce.

Adding social features to existing commerce platforms and situations is the low hanging fruit of social commerce at the moment and studies like this one from Eventbrite show a clear revenue benefit. I suspect its something consumers are starting to expect.

When I was in a somewhat remote place last week on the South island of New Zealand, I noticed the standard “Visit us online at companysite.com” was often replaced with: “Visit us online at (followed by Facebook and Twitter icons). I’m sure you’ve seen such signage in storefront windows in your town as well. Social connections are becoming part of expected exchanges between consumers and the brands they buy from. The opportunity for brands is, how relevant and useful (and easy) can they make these exchanges as part of the customer relationship?

Adding sharing, interaction, rating/review or even something like group buying to a web property that is already perceived as a destination for ecommerce transactions is an easier thing to do than adding ecommerce to a social media site and it’s likely perceived as more appropriate. It’s a way of showing that the brand isn’t just about selling product/services, but that its open to connecting and useful engagement too. Companies are increasingly rewiring more than their web sites for such social commerce. 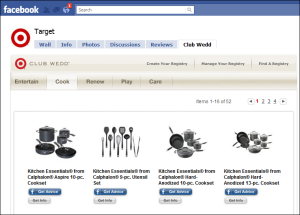 Early adopters for adding ecommerce and transaction capabilities within social media sites include Brooks Brothers and 1800Flowers with storefronts and Walmart with a deals app on Facebook. Another major retailer, Target, put searchable product inventory on Facebook as part of their Club Wedd registery offering, but the actual transactions take place on the Target.com website.

It’s still early days for finding the right way to add ecommerce functionality within a communication environment that is intended to be social, not transactional. Of the early adopters that added online stores to Facebook or their blogs, I do wonder how profitable those initiatives are at this point.

My cautious optimism about social ecommerce doesn’t mean I don’t think it’s an area that will take hold. I do, as long as merchants can make the buying experience part of the social experience. I suspect that’s going to be different by industry and community.

What do you think?

Are social networks and media sites ready and appropriate for transactional ecommerce functionality? How seriously should brands take the opportunity for order capture within social media sites?

From a consumer perspective, have you ever ordered something within Facebook or another social media site? If you’ve checked in out and didn’t why not? If you did, what made you comfortable and would you do it again?

In fact, let’s take a formal poll on which “flavor” of social commerce our readers are implementing most:

How are you implementing social media and ecommerce together?