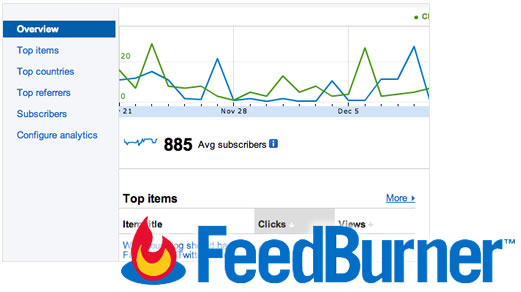 The FeedBurner re-design has been in beta testing for a few months now, but does it make the service better?

I’m a big fan of FeedBurner and I really like the new look and feel as its much cleaner and matches other Google products, however since it’s so familiar, it feels a little lacking.

What I’d really like to see is FeedBurner integrate this information into Google Analytics. The two services are very similar in what they do, and how they look, that it feels like they should live together. Hopefully then FeedBurner could utilize some of the great features in Google Analytics to make this data more robust.

Other than the new design, the only other new item is the fact that it does real-time analytics. This lets you use what impact your new post has on the web moments after you publish it.

Now if you really have time to sit down and watch your analytics in real-time, good for you. But I doubt many will see this as a usable feature.

Instead, I’d like to see FeedBurner give users more customization and social interaction.

Integration into Twitter is great, but what about Facebook? Are there other destinations that could benefit from updates? What about seeing status updates that include our FeedBurner URL so we can really see how it’s being syndicated?

What about some additional feed customization? The basic ‘clean’ template is ancient in terms of internet age and it’d be nice to see even basic customization like Twitter offers.

How about the ability to share a FeedBurner account with multiple Google accounts? Much like Google Analytics and Webmaster Tools, sometimes more than one person wants to analyze the data.

How about some nice charts and data points like Feed Analysis offers? These charts are well received by those that don’t get the data.

It just seems to me that FeedBurner has just maintained its presence since it was acquired by Google in 2007. Little changes have been happening over the years, but it still feels like it’s not living up to its potential.

Maybe it’s the lack of competition, or maybe the FeedBurner teams feels it doesn’t need to be any more than it already is, however I’d like to see FeedBurner step up its game and become much more valuable to marketers and site owners.