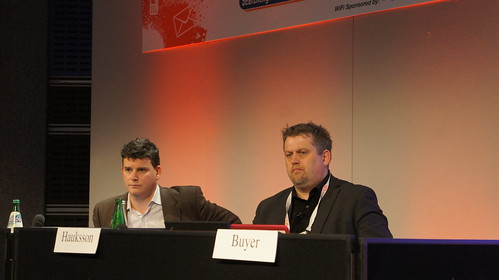 The last session of the day on the last day of SES London was on Social Media in the Marketing Mix with Kristjan Hauksson of Nordic eMarketing in Iceland and Mel Carson of Microsoft in London.

Kristjan started things off: What happens when a volcano goes wrong?  He recounted the situation last year when Eyjafjallajokul erupted (say that 3 times fast – I dare you) and so much ash spread into the atmosphere that hundreds of planes were grounded from flying.  This, you can imagine, had a dulling effect on Icelandic tourism. Iceland regularly has more tourists than there are people who live there.

Understand that everything we do in broadcast and digital needs to take advantage of all channels available.

Problem – Iceland hit by a volcano eruption that stops most flight traffic and threatens tourism.
Solution – Created a website with a video. An AWESOME video: inspiredbyiceland.com.  Amazingly, Kristjan says none of the people in the video were from Iceland – they found most of them randomly.

They started to target keywords not directly using “Iceland” but related to news properties talking about Iceland. They also targeted multiple languages. “inspired by iceland” as a query on Google went from 0 to 428k listings in Google search results.

A lot of the promotion occurred via social channels. The video was promoted via video distribution services. They gave the video to people to mash-up and make their own versions. Other well known people started making their own versions of Inspired by Iceland. In total, 839 videos were created.

The stats: There were 150k visitors the first week. 1.1 million total visitors in 2010. That’s all traffic to inspiredbyiceland.com. Impressive. Here’s the video:

After watching this I want to go to Iceland. Really. I’d love to go for my birthday in June – we’ll see.   BTW, there’s a teeny, tiny fringe NSFW part for about 3 seconds, at 1:14.

The video gained major media coverage: Bloomberg, Fox News, BBC. The marketing team used listening tools to identify when people talked about the site and then reached out to them and gave them more content.

By leveraging Google Universal search and a holistic perspective – Display ads, FB Ads, blogger relations and keyword optimization a tourist summer that looked bleak was on par with a very successful 2009 and 2011 looks really good.

Lesson: Listen and use the opportunity when it happens.

Next up is Mel Carson from Microsoft.

Mel opens up telling a story about finding a magazine about glutes (as in butt muscles) that he tweeted about. The store where he purchased the magazine was listening to Twitter and engaged with Mel (with a sense of humor). The lesson is that the direct interaction resulted in relationship building – loyalty.

Mel follows up with a story about pulling an enthusiastic and persistent fellow out of the line to get into a Microsoft party that was sold out. The gratefulness showed by the guy on Twitter demonstrated what kind of effect acting in the right way at the right time can have between brands and individuals.

Mel’s next story is about a monk. A Bishop (?) wanted to recruit a monk. Mel set him up with a Microsoft Advertising account. 3 years later they signed up a monk. “If it hand’t been for the internet, I’d still be a software engineer.” It’s a great example of paid media driving traffic to social media where they were educated and then converted.

Mel says it’s important to remember that humans are social. Use ourselves as a form of media. Don’t just think about social media, but all the platforms, screens and places where you can engage customers.

– Always ask why? Facebook! Why? Then you have goals.
– Where’s your varnish – what ties your message across platforms? Otherwise you have silos.
– Optimize for people “outside the room” How to make your content discoverable, shareable
– Internal education leads to external evangelism
– Earn it. Earned media, buzz, discussion, etc. Win7 Launch 221m impressions
– Think “social media marketing” not just social media. Be disciplined
– What’s the ROI – return on interaction – return on investment

This session had some great stories about social media and engagement.  Thanks to both Kristjian and Mel. Speaking of Mel, he took a few minutes to chat with me before being rushed off by his Microsoft entourage about social media strategy and how important the “people” component of social media is, on contrast to all the emphasis on technology.