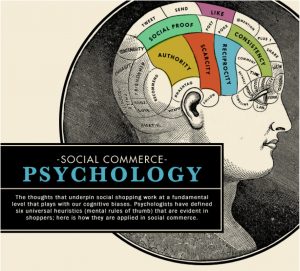 This is indeed an infographic of a different color.  Tab Juice has created a very interesting graphic which focuses on 6 mental rules of thumb that affect social commerce buying decisions.  In an online world flooded with infographics this one definitely stands out!

“150+ Content Marketing & Social Media Predictions for 2012”  This very extensive list of 2012 predictions includes some of the creme de la creme for online marketers including: even more from Google+, the year for video and mobile, and long-form content poised to make a comeback. Via Content Marketing Institute.

Were 2011’s Predictions a Home Run or a Swing & a Miss?
“Six Social Media Trends for 2012” It appears that many of David Armanos 2011 social media predictions were spot on.  One miss was that Facebook would get their location based services together (sadly they did not).  His outlook for 2012 appears to require companies and brands make it as easy as possible for consumers to interact, share, and engage.  Which trends do you think have the most legs? Via Harvard Business Review.

Customer Service Getting MORE Social on Facebook
“Facebook introduces private messages between business pages and fans”  Before you get too excited there is something you should know.  Facebook’s new messaging feature enables users to initiate private messages with brands, not the other way around.  Oh yeah, and it’s not available in the United States.  Skeptics warn that this new feature could actually do more harm than good.  What do you think?  Via The Next Web.

Time Travel for All on the Facebook Timeline
“Facebook Rolls Out Timeline WorldWide” Facebook Timeline’s are finally available to all users after months of beta testing.  Word to the warning, if you’d like to forget some of the posts you’ve made now would be a good time to determine which stories to hide, share with certain contacts, or delete from your page and maybe your memory.  Via Facebook.

Hey Facebook, There’s an Ad in My Feed
“Facebook to Start Placing Ads in User News Feeds in January”  Facebook ads are now getting increased visibility to lead users to their products.  Sponsored stories currently appear only on the right hand column of Facebook pages but will now be the same size as other news feed items in your feed.  Posts will be identified with a link that says “Sponsored” below the message.  Do you think this approach will boost sales or irritate users?  Via AdAge.

IKEA Drawing in Visitors with More Than Swedish Meatballs
“IKEA tempts people in-store using Facebook” IKEA wants you to bring your friends to their stores!  Participants receive detailed information about group events after interacting with the company’s Facebook page.  Attendees are provided special discounts and prizes just for showing up.  What a clever way to get people in the store, and for you to invite your strongest friends to help carry those dreaded boxes full of furniture parts.  Via Econsultancy.

Google+: Reservations for Google Plus 150 Million

Strategize, Operationalize, & Maximize Your Google+ Strategy
“How to Build an Effective Google+ Brand Strategy”  Since it’s release in June Google+ has grown to over 40 million users.  Now is the time to explore Google+ and determine what impact it can have on your brand and the way you communicate with customers. Via Mashable.

Google Christmas Comes Early This Year
“Google+: A few big improvements before the New Year”  This week Google announced the release of some new Google+ features and functionality for users to test over the holidays.  From the sound of it there should be some functional improvements and a few extra surprises.  While you’re relaxing with family this weekend try to steal a few minutes away to check out Google’s new features.  I know I will!  Via Google.

Multiple Google+ Page Managers? Don’t Mind If I Do
“How To Manage A Google+ Page As A Team”  Many marketers will be excited to learn that Google has not enabled up to 50 people at a time to manage Google+ brand pages.  I predict that we will see a lot more interaction on Google+ Pages now that it allows for multiple contributors.Via Read Write Web.

Santa Google
“Ho Ho! Google Launches Santa Cartoons, Phone Calls For All” Have a child anxious to hear from Santa? Or still a believer yourself?  Google launched a new service that allows users to send personalized cartoon messages from Santa, complete with the name of the child (or adult), location, favorite food, or desired presents.  You can also reach Santa at his personal Ho Ho Hotline on Google Voice.  Be sure to keep in mind the time difference!   Via Technorati.

Research: Insights into Social Media Marketing and its Future

comScore: It’s A Social World
“It’s a Social World: Top 10 Need-to-Knows About Social Networking and Where It’s Headed”  Social networking has become the most popular online activity worldwide.  This report by ComScore provides key insights into the influence that social networking has had on the digital landscape and what this means for online marketers.  Via ComScore.

Keep Your Facebook Friends Close & Your Frenemies Closer
“Friends & Frenemies: Why We Add and Remove Facebook Friends”  Research suggests that our real world interactions drive our online friendships.  While friends trying to sell us something or being too depressing entice us to remove them from our network.  Curious to know what other reasons Facebook users add or remove friends?  Via NM Incite.

Mobile & Social Working Together
“Marketers Look to Integrate Email, Social, Mobile”  Now that mobile and social media marketing have been tested it’s time for organizations to make the move.  As marketers continue to understand how to leverage both strategies they are also looking to create a better integration between the two, and working to tie them to other more established forms of digital marketing such as email.  Via eMarketer.

Social Fails: You Really Shouldn’t Have Done That

Smile You’ve Been Caught On Security Camera
“FedEx Guy Throwing My Computer Monitor”  Ever wondered why your holiday cookies show up in a million pieces?  This might be why.  Via YouTube.

Learning From the Mistakes of  Others
“What Ten Social Media Disasters Taught Us in 2011”  This year saw a lot of  flounders, flubs, and downright fails in social media.  The ten examples provided in this article can be added to our list of things not to do when approaching our social media strategy for 2012.  Via Social Media Today.

We have an amazing team working at TopRank Online Marketing and here are a few headlines they considered worth a read this week:

Alexis Hall – “Biggest Search Events of 2011 & Predictions for 2012”
This article rounds up the biggest search events in 2012, including the Google Panda Update, SSL encrypted search, and the impact of social signals on search. The 2012 prediction which I found to have the most potential impact is that the Google SSL search updates will continue and the amount of queries impacted will continue to rise. This could have a huge effect on how SEO’s use analytics and measure performance moving forward.  Via Search Engine Watch.

Emily Conley – “Can An iPad App Really Make You More Productive and Inspired?”
Unstuck is a new free tool to help you move past a mental roadblock.  The idea behind this app is that you can follow a couple steps and the app will give you advice to make headway on a project you’ve been stuck on.  The irony is it really seems to be yet another distraction for procrastinators, but the idea behind it – an app with human-like intelligence – is intriguing!  Via Co.Design.

Brian Larson – “Hitwise: Facebook Was 4 of Top 10 Search Queries in 2011”
I thought this was incredibly interesting. Facebook keyword phrases were 4 of the top 10 searched keywords on the web. For those wonder about the future of Facebook, it’s clear consumers are still hungry to connect with this social network (BTW, how hard is it to just type facebook.com in the URL bar?).  Via Search Engine Land.

As you can see, Lee and I are experimenting with different formats for our weekly Internet Marketing News Roundup, We’d love to get your feedback on what you like or don’t like.

from the entire team at TopRank Online Marketing.