Scott Stratten’s (@unmarketing) opening session at BlogWorld NY was one of the sessions that I was most excited about.  I even asked if I could walk in early and get a good seat (nerdy I know).

I was not disappointed.  Scott was one of the most entertaining and honest speakers I have seen to date.  In short, he keeps it real (and speaks in tweets which makes sharing easy).  Before his session I had the opportunity to ask Scott some questions of my own as and he was kind enough to provide me with some great and you guessed it, honest answers which I have also included at the end of this post.

The premise for his presentation today was the 7 Deadly Sins of Social Media.  Lets be honest, whether we like it or not, the majority of us are guilty of at least one of these sins at one point or another. So, what are the 7 Deadly Sins according to Scott Stratten?

Gluttony
“Social media is not about being everywhere, it is about being great and present where you are.” – @unmarketing  Tweet This

Scott showed an example of a company tweet that had clearly been syndicated from Facebook regarding their number of likes.  What this sort of action shows your customers is that you aren’t available to engage, but you are here to announce.  I believe that there are cases where posts can be cross-shared across multiple platforms but each post must be relevant to the platform you are sharing it on.

Another interesting term that Scott used for this sort of interaction was “Mannequin Networking” or being there without actually being there.  What this teaches us is that the ability to react and be present is worth much more than simply sharing our own agenda.

Pride
“You cannot avoid looking at tools because you don’t like it.  As an example, I hate Farmville.” – @unmarketing Tweet This

Pride can easily get in the way of your evolution as an individual or a company.  Some of the best advice that Scott gave during his whole presentation was “learn it if you hate it, because you can turn it down with an educated decision.”

Say your target market is immersed in something like Farmville on Facebook.  According to studies the demographic for social gaming is typically  a 47 year old, educated, female.  What is the moral of the story?  If your network is spending time doing something the least you can do is understand it.

Sloth
“If you are going to use it, use it, if not delete it.” – @unmarketing Tweet This

If you don’t monitor your page regularly then delete it.  If you are only able to monitor your pages on a monthly or even weekly that is simply not enough.  If an account has been created and you don’t use it, that is worse than not having one at all.  Social media is very much about connecting and engaging with people.  If you don’t like to interact and are not a people person, social media is not for you.

A major offense by many companies is failing to include mobile as part of their plan.  Almost everything we do is through our phones and if we want to be social its imperative that we recognize how our customers will be accessing and interacting with our information.

Mobile Marketing Tip: Switch phones with someone and see how your site looks on different devices.  If you make your audience work to consume your content they will stop consuming it.

Greed
“You want to get more fans and followers?  Be better!  Create better content.” – @unmarketing Tweet This

We’ve all seen those companies that offer “more fans for $5” or “get more fans now.”  There is no quick fix or instant gratification when it comes to social media.

When focusing on this deadly sin Scott provided many examples of companies that literally asked their followers not to leave negative comments, and that they would be deleted.  Negative comments happen to everyone, it is how you respond that sets you apart.  A great example of a company overcoming a ridiculous blunder was that of Red Cross.  Below I have included the initial tweet as well as the response that the Red Cross quickly posted to recover from the damaging message. 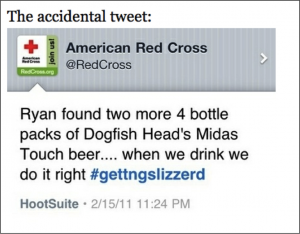 Envy
“Just because you say you’re humbled, doesn’t mean you are.” – @unmarketing Tweet This

Ah yes, the ugly self-promoting re-tweet rears its ugly head.  While sharing positive feedback about yourself or your brand is okay in moderation, some take it too far.  When the only RT’s that some people ever share are compliments to them, it gets old very quickly.

QR codes are fairly new, and we are already ruining them.  Companies are getting greedy and placing QR codes in places that are not practical for users.  A couple of the examples that Scott shared were that of codes present on airplanes, subway stations, and other places where smartphone users don’t have service.  The problem: you need service to scan a QR code.

Wrath
“Outrage does not take the weekend off.” – @unmarketing Tweet This

If someone has a poor experience and has a social account, chances are they will share it with their network.  Scott shared an example of someone who had a poor experience at a restaurant, and left a note for his or her server in ketchup and mustard on the table before leaving.  After which they shared it on their social network.  You can bet that they called out the restaurant that provided the poor service.

A very different example is that of an online pizza delivery service in Austin, TX.  Apparently one customer thought that it would be funny to make an odd special request for their delivery.  Below you will find the awesomeness that is the customer call center employee’s response.

My name is Chad from Austin’s Pizza Call Center. We received your online order earlier this evening. We saw your note, “Please draw a unicorn fighting a bear on the box.” Unfortunately, our stores are not equipped to fulfill such a request. They simply do not posses the required skill. I, however, took it upon myself to draw out the picture you requested on a post-it note. I hope this suits your needs.

Apathy
“Come to my virtual party.  I’m going to virtually punch you in the face.” [email protected] Tweet This

Apathy may be one of the biggest sins an online marketer can make.  Scott asked the audience how many of them have turned off Facebook Event notifications, due to the number of virtual events that they have been invited to.  If the audience isn’t vetoing events all together, chances are they are ignoring them.

Whole Foods is one company that has done their due diligence to find something that interests their audience.  Whole Foods knows that simply posting pictures of vegetables on Pinterest will not engage their audience.  Instead the grocery giant created a board called “Super HOT Kitchens” which is meant to reach the foodies that will frequent their stores.

What is your best recommendation for “Unmarketing” in a vertical or category that is extremely competitive?

That’s probably the best time to “UnMarket”. UnMarketing is about positioning yourself as an expert and building relationships so when they have a need for a product or service, they choose you without hesitation.

In hyper-competitive categories, there is more cold-calling and advertising than anywhere else. That’s aiming at the bottom of the barrel where the margins are lowest and price sensitivity is highest. People first do business with those they know, like and trust.

When trying to build engagement online what do you think is more important and why: Creating customer-centric content for the proper stages of the buying cycle or reaching out to specific influencers or individuals with customized messaging?

Content is still king, since it shows you know what you’re talking about. There is nothing wrong with reaching out in a targeted manner, but be careful, especially in social media platforms, since it’s usually viewed as spam. If I wanted to connect with influencers in my industry I would connect with them through Twitter etc but actually get to know them, not try to tell them what I want.