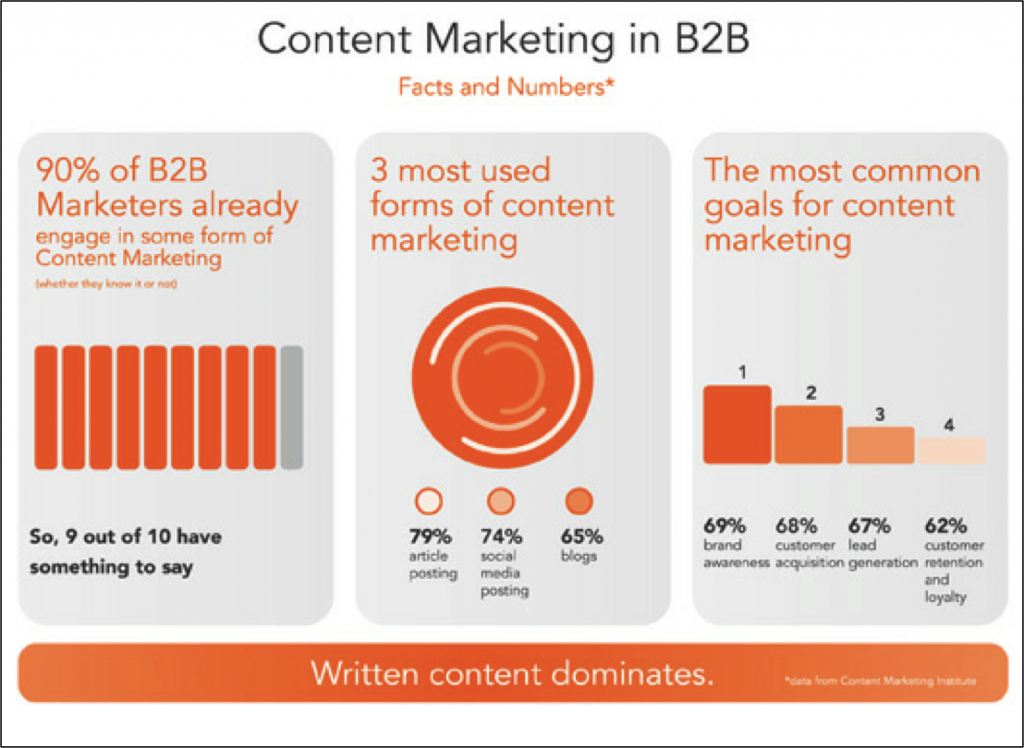 exploreB2B recently partnered with Content Marketing Institute and MarketingProfs to creat this infographic which covers elements of why, what, where, and how of B2B Content Marketing that are necessary to execute on a successful campaign.

Shawna Kenyon – How to Build – and Keep – an Engaged Audience
For those of us creating content on a regular basis it is important to understand how best to build and keep and audience.  Many companies find themselves asking: with so much content online how do we fit in, and how do we differentiate ourselves from the competition? Gripping headlines, to the point copy, and promotion are just a few of the tips included in this article.  Via Mashable.

Google+ Product Manager Spams Twitter With Bot Network
Chances are you’ve seen automated tweets before, and were not impressed.  In 2008 the handle @trackgirl was setup as a Twitter Bot and the creator found that people were engaging with the bot and sending direct messages in response to tweets that were being sent out.  Read this article to learn more.  Via Wired.

Google to Offer Free WiFi in NYC
New York City is known for it’s spotty wifi service, especially when entering the underground subway system.  Starting on Monday some New Yorkers will be given the opportunity to keep on streamin.  Via AdWeek.

Never Ever Start Facebook or Twitter Campaigns on Friday – New Yesmail Study
This article provides further reasoning why marketers should not attempt to start a Facebook, Twitter, or YouTube campaign on a Friday.   Based on this study Friday’s are already stock full of messaging, however Tuesdays are a little les cluttered.  Read on to gain even more insight on social marketing and why sometimes less is more.  Via VentureBeat.

It’s Official: Microsoft Buys Yammer for $1.2 Billion
Yammers price tag and buy out from Microsoft has been rumored for the past few weeks.  Microsoft has now agreed on a hefty $1.2 Billion investment to purchase Yammer, and integrate the service as part of their office productivity tools.  If you are a Yammer fan have no fear, for the time being Yammer will remain as a stand alone  product and the company will continue to maintain control.  Via SocialTimes.

Apparently Facebook Knows What’s Best For Us
In order to create consistency across Facebook’s users (or so they claim) it was announced in April that the social network would update email addresses to one provided by their own email service.  This article provides what the writer considers to be a natural progression of the actions Facebook is currently taking without properly notifying users.  Everything from Facebook accessing users vehicle navigation systems, to implanting users with Facebook chips in their brains.  Via Media Post.

5 Time Saving Tools for Twitter
Choosing the right time saving applications that meet your social networking needs can be overwhelming.  The author of this article ran a survey of his Twitter followers that had at least a 5-digit following to see what tools they use to manage the amount of information that is shared and consumed on a daily basis.  If you’re looking for some ways to increase your impact while saving time this is an article you don’t want to miss.  Via Inc.

7 Things to Check Before Sending A Sarcastic Message
Industry research has shown that online messages are misinterpreted more than half of the time.  We’ve all been there, you think of something amusing or sarcastic that you want to share in an social message or email reply.  Problem is, you may have just confused or worse, offended your audience.   This article provides  7 sound tips for checking your message a final time before sharing, sending, and possibly turning off the recipients.  Via Ragan.

A Complete Guide to the Facebook WordPress Plugin
If you create and publish content on a WordPress blog social integration has just gotten easier.  Facebook recently released a new highly comprehensive plugin for WordPress which creates ease of use for auto-publishing to your timeline.  Via Social Media Examiner.

Time to Weigh In: What day of the week have you found to be most effective for starting your social media campaigns?  Do you think that Yammers integration with Microsoft will shift the way you are using their products?  Finally, does Facebook really know best, or are they taking it too far?