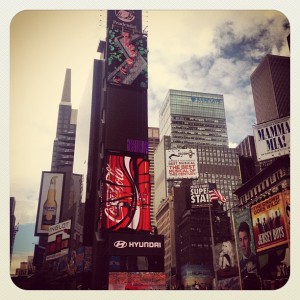 Finding Beauty in NYC is All About Perspective & Vantage Point

Many of you might know that Lee Odden (@leeodden) and I attended BlogWorld in New York last week.  I was fortunate enough to get the opportunity to interview many of the speakers that were presenting, and sit in on some really great sessions.

That being said, many of you have already seen the conference from my point of view.  So I thought it would be nice to share some of the feedback and highlights from attendees as a means to share:

The buzz on Twitter for Scott Stratten’s opening session was overwhelming.  Because he warned the audience beforehand that he spoke in tweets, he set himself up for some pretty great feedback during and after his presentation.  One of the best things about Scott’s presentation was that the stories he told, and the way in which he told them was memorable for the audience.

Are you on social to engage or are you here to announce? @unmarketing #bweny

To be great at social media (and many other things), you only have to be average, because most others suck. – @unmarketing #BWENY

Tom Webster is the VP of Strategy at Edison Research and shared some very timely information with attendees.  At the center of his presentation was Edison’s latest report on how Americans use social media.  Tom’s session focused on what these trends mean for content creators, marketers, and brands alike.  Grab the latest copy of “The Social Habit” today!

Only 1/3 of all social networking users in the U.S. have EVER followed a brand. – @webby2001 #SocialHabit #BWENY

Jay’s presentation was one of the ones I was most disappointed to have missed.  Twitter was buzzing with feedback (even though the Internet connection was not very strong) and throughout the conference I was hearing tidbits from his presentation.  Curious to know what the “12 Must Dos” are?

You Can Find Jay’s Full Presentation on Slideshare: 12 Imperative Must-Dos For the Serious Blogger

Blogging is not a project, it’s a process. – @jaybaer #bweny

“You are the early detection system on your own blog quality. If you don’t think it’s good, it’s probably not.” – @jaybaer #bweny

Peter Shankman (@petershankman)  & Jelena Woehr (@jelenawoehr) – When It Gets Real:  What Happens When Your Fun LIttle Personal Brand Has to Grow Up

Peter Shankman of Vocus and Jelena Woehr of Yahoo! provided an extensive amount of insight into the ups and downs of working with both young professionals, and older well established professionals.  Step into the modern working world with this fantastic presentation from two experts on branding.

Own your mistakes. Only good things can come. @petershankman #bweny

Gaining an understanding of how your customers use their smart phones, what they are searching for, and the ways they find information are all key in creating a cohesive mobile marketing strategy.  Jason Falls session provided some stellar examples of companies that are doing mobile well, and those that are performing poorly.

TopRank Recap: A No B.S. Guide to Mobile with Jason Falls – #BWENY

Best “duh” moment at #bweny so far: @JasonFalls says “Include the frickin URL with your QR code.” Should be so obvious, yet I rarely see it.

@Jasonfalls says Only 6% of population scans QR Codes, and thats a 4.5% increase from 1 year ago. #bweny

Simple advice: Before developing a #mobile app, poll your customers about which OS they use/features they want. ~ @JasonFalls #bweny

An Optimized view of online marketing is based on a customer-centric approach.  This approach relies on a combination of SEO, content, and social media in order to implement a cohesive and effective strategy.  Lee took a very straightforward approach to the do’s and don’ts of online marketing in this day and age.

Do you have a disposable brand? If not, then don’t buy links. @leeodden #bweny

Corbett Barr (@corbettbarr) – The Art of Writing Epic Sh*t:  How to Create Content that Blows Minds and Attracts A Crowd

Corbett Barr’s presentation was based on a concept that while simple, many companies fail to do.  The key to becoming a successful blogger is to put out stellar content with a unique point of view.  Building an audience isn’t about following fads or shady tactics, it’s about writing things that people want to read.  In a blog post on his site titled Write Epic Sh*t Corbett shares some information that was also included in his presentation.

Solid applause for @corbettbarr after his session. Clearly, his content connected with this audience. #bweny

There were so many great sessions at this years BlogWorld conference, and not enough time to absorb all of the information.  I’ve shared what I consider to be the highlights, are there any other that caught your eye?  I look forward to hearing which sessions provided you with the most actionable information, and which speakers you would like to see more from.  Happy blogging!