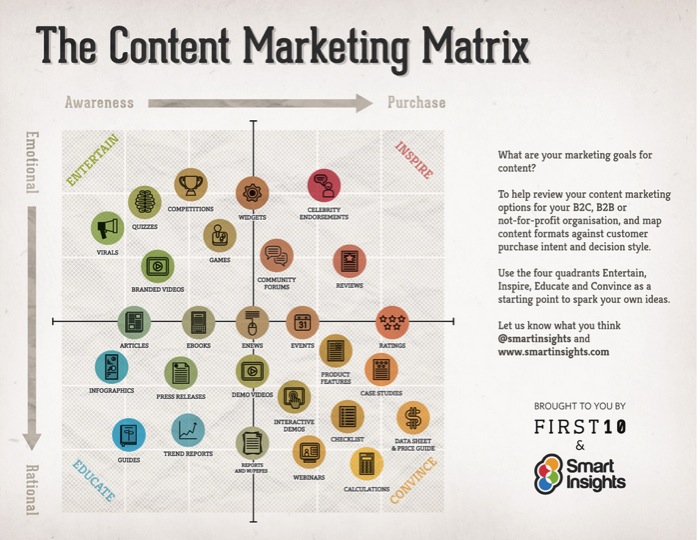 This recent infographic from First 10 and Smart Insights provides recommendations for different content types depending on the stage of the buying cycle that your customers are in.  Some of the content types include:

40% of Top Brands Are on Instagram
In early 2012 Instagram had 15 million users and was only availabile on the iPhone.  Now there are nearly 80 million users, and Instagram is also available on Android.  Looking for a glimpse into how the top brands are fairing on Instagram?  Read more to find out.  Via Mashable.

Square Partners with Starbucks
Beginning this fall, Square will begin processing all U.S. credit and debit card transactions at participating Starbucks stores across their 7,000 locations. Square users will also be able to find a nearby Starbucks in the Square Directory from their smartphone.  Via TechCrunch.

Study: 50% of Mobile Queries In Travel, Restaurants, Autos Result In A Purchase
Over the past two years studies have confirmed the importance of mobile optimization, and advertising.  A recent study looked at the mobile path to purchase in three verticals, adn the differences between smartphone and tablet usage among US adults.  The results were a bit unexpected, read on to find out more.  Via Marketing Land.

Google Tests Showing Gmail Results in Search Queries
Google announced on Wednesday that they are looking for beta testers for a new feature they are rolling out.  The search giant is testing showing Gmail results in Google search queries.  Gmail results will be displayed separately, and users will also have the option to turn of their personal information. Via Mashable.

Google Not The Center of the Universe For A Change
Could it be that there is one demographic that does not consider Google to be at the center of its world?  According to a study conducted by Nielsen, mobile users are increasingly going directly to websites or apps, rather than starting on a search engine.  This is especially true in the hyper-competitive travel, auto and restaurants category.  Learn more about his study in this coverage on Search Engine Land.

Why Google+ Is a Ghost Town
The UK based research firm Umpf recently released a study that shows activity on the fledgling social platform pales when compared to its more popular counterparts Facebook and Twitter.  The study revealed that only 6 G+ users out of 100 million are likely to share a story. This article includes an infographic illustrating this comparison.  Via Mashable.

Google+ 1 Year Later
It’s been over a year since Google initially rolled out the often polarizing social network Google+. So what have been the results? Mixed to say the least. While the number of user is reportedly still growing, the activity level for those users seems to be rather flat. Steve Beatty, of Search Engine Watch, shares some interesting stats and data to commemorate Google+’s 12+ month anniversary.  Via Search Engine Watch.

Research Online / Purchase Offline a Bigger Phenomenon Than Previously Thought
Though we track online marketing success differently than traditional marketing methods, perhaps we should be paying a bit more attention to statistics other than web traffic and click-through rates. Analytics firm RapidBlue has determined that Google AdWords campaigns increase visits to retail stores.  Via CNN.

Time to Weigh In:  It appears that Google+ didn’t fair too well in their first year.  What do you think G+ can do to increase use and engagement?   Is your company optimized for mobile, and have you considered the benefits of mobile advertising? Do you think that B2B companies have an opportunity to use a platform like Instagram?