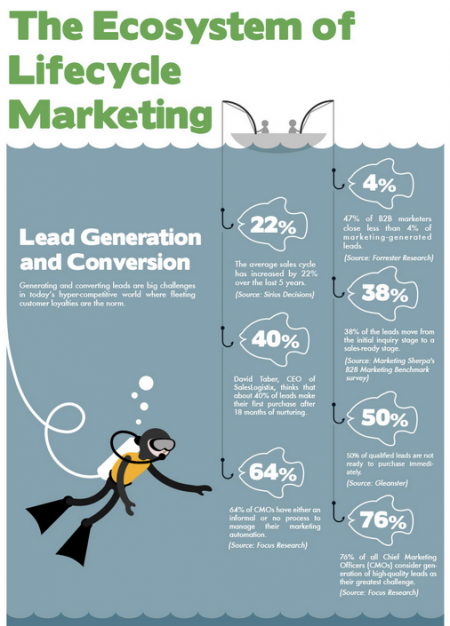 The Ecosystem of Lifecycle Marketing

This infographic from RightOn Interactive takes a deep dive (literally) into the world of lifecycle marketing automation.

The topic of customer lifecycle marketing is near and dear to TopRank of course, especially when it involves long term engagement with prospects using integrated content, social media and search marketing.

LinkedIn Gets its Own Version of Facebook Likes: Endorsements
Endorsements allows users to recognize professionals for their expertise.  It really is as simple as clicking a button.  On the users profile there will be a list of recommended endorsements.  You can either click to endorse, or suggest other area of expertise.  Via TNW.

How to Survive A Bacon Shortage: Twitter Guide
Bacon lovers are taking to Twitter after the recent prediction from Britain’s National Pig Association that there will be a shortage of pork in the next year.  You’ll even find a flow chart titled “Should You Eat That Bacon?” which will ultimately tell you yes, you should.  Via Washington Post.

72% of Consumers Expect Brands to Have Mobile-Friendly Sites
The verdict is in, consumers don’t like websites that are not mobile-friendly.  The data for this study came from a survey of nearly 2,000 U.S. adults from 25-54.  Another thing we learn from this survey is that brands should keep in mind what the goal of mobile users is, and how it differs from that of desktop users.  Via AdWeek.

Myspace Previews Site Redesign – But Is It Enough?
Before Facebook, Twitter, and Google+ were popular the hot ticket item was Myspace.  Unfortunately, once users were presented with a more “sophisticated” set of social platform choices, they migrated to other sites.  This post includes a video from Myspace showing their new capabilities and design, which is very visually appealing.  However, we have to wonder if this change is too little, too late.  Via Los Angeles Times.

9 in 10 Online Small Businesses Network Online, 8 in 10 Gain New Business
According to this study 74% of respondents say that networking online is just as valuable, if not more so, than networking in person.  Additionally, 78% say they’ve gained at least 25% of their new business leads via online and social channels in 2012.  Via MarketingProfs.

Brian Larson – Twitter Opens More Content to Search Engines
Twitter users know that leveraging hashtags can help them participate in emerging conversations and tap into a larger audience. But what if those hashtag threads were highly visible OUTSIDE of Twitter as well? Searchers would be presented with relevant hashtag conversations related to their query. Well, that’s exactly what Twitter is aiming to do with their most recent update. Learn more about this change in Matt McGee’s post on Search Engine Land.

Mike Odden – Why Being Unfriended on Facebook Hurts
According to a study published this summer, the more you’re on Facebook the more emotional ties you have to different interactions on the social platform. Jennifer Bevan, a professor at Chapman University in California, authored the study on negative emotional responses to being unfriended along with some of her undergraduate students, two of whom are listed as co-authors.  Via Mashable.

Time to Weigh In:  Have you had an opportunity to try LinkedIn endorsements?  If so, what impact do you think this change will have on profiles?  Have you completed an audit of your site to ensure it’s mobile friendly?  Myspace: dead in the water or a new opportunity?