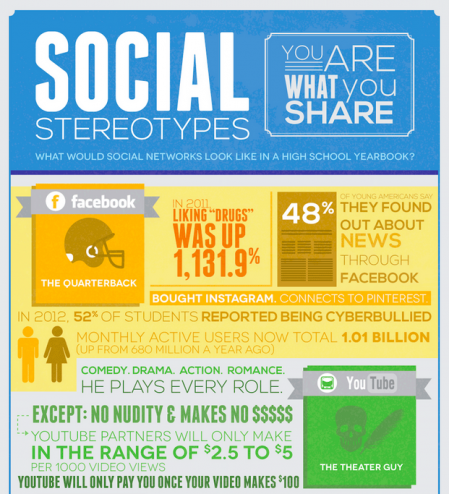 This recent infographic from WIX  focuses on social media, and the types of things that people share, or read.  Findings include:

23 Tips on How to A/B Test Like A Badass
With all of the tools now available it has become very easy and effective to run an A/B test.  However, many marketers are still scratching their heads trying to determine how to take their testing to the next level.  Via Search Engine Watch.

7 Effortless Ways to Find New Ideas for Your Blog
Coming up with new and exciting topics for blog content is no easy undertaking.  This article shares 7 easy ways to come up with new blog content regularly.  Read on to find out more.  Via Social Media Examiner.

One Year Later, YouTube Pulling The Plug On 60% Of Its Original Content Channels
In the past year YouTube has strived to make their platform more like traditional television.  They began creating original, high-quality content  in an attempt to inspire users to come back again and again.  What went wrong?  Via TechCrunch.

Hijacking Google Search Results With Duplicate Content
Dan Petrovic recently explained how he hijacked a few pages in Google which enabled him to confuse Google into thinking a page on MarketBizz should really show on dejanseo.com/au instead of on marketbizz.nl.  Via Search Engine Land.

New Facebook Features in HootSuite: Social Media Management Made Easier
HootSuite has released a bunch of improvements for the Facebook toolset which allows for enhanced demographic targeting, geo-fencing profiles, and new analytics modules.  Curious to know what else was included in the update?  Via HootSuite.

Jolina Pettice – Facebook Launches Job Board – What It Means to Job Seekers, LinkedIn and More
Facebook launches its Job Board, aggregating nearly 1.7 million openings from recruiting companies already using the platform.  What does this mean to users, companies and LinkedIn?  Via Forbes.

Mike Odden – By The Numbers: Is Windows 8 Dead On Arrival In The Enterprise?
Microsoft is hoping to reach 2.1 billion people over the next several months with the marketing of new release, Windows 8.  Unfortunately, Windows 8 is seeing only roughly half of the interest from IT hardware decision-makers that Windows 7 saw at the same point.  Via Forrester.

Brian Larson – Google Improves Location Targeting in Time for Holidays
According to Search Engine Land, 80-90% of consumers research their purchase online prior to buying. To help consumers more effectively convert their online research to offline purchase (at the store), Google has made some key changes to way locations are presented in SERP. Learn more about these changes and what they could mean for your business – or your shopping experience – this holiday season.  Via Search Engine Land.

Time to Weigh In:  Have you had success with A/B testing?  What is the best piece of advice you can share with our readers?  How big of an impact do you think it will have on traffic when YouTube removes 60% of it’s original content.  Will the recent changes with Pinterest’s business tools impact your strategy?