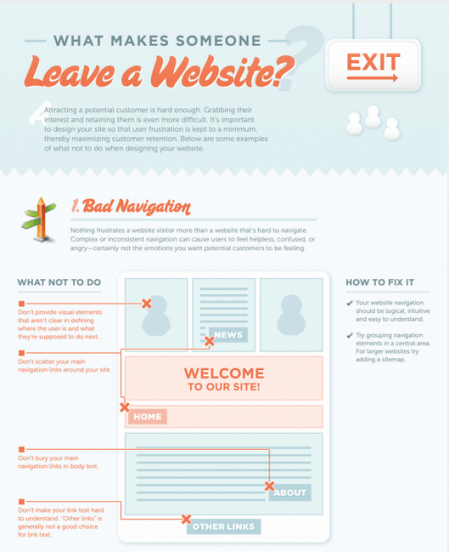 This recent infographic from Nexus Themes targets 8 common mistakes that drive customers away from your website.  These sins include:

Yahoo Has More Users Than Gmail – Introduces A Faster, Cleaner Email Interface
Yahoo has begun pouring effort into updating their email platform across all platforms.  A more modern design is being implemented in hopes of attracting users to actually use their Yahoo! Mail account, instead of using it as a repository for junk mail.  Via Marketing Pilgrim.

First Look At Google+ Communities: The Importance For Brands, Search and PR
If you have used Facebook or LinkedIn Groups for business, you’ll be interested in Google+’s new feature.  Communities is another step by Google towards building authority around individuals related to a particular subject.  Via Econsultancy.

Twitter Adds Instagram-Like Photo Filters
Last week Instagram pulled Twitter Cards support from its app, meaning that users who shared  their images were relegated to simple links.  Twitter has teamed up with Aviary to provide it’s own series of photo filters.  Via Mashable.

For Email Marketers, List Segmentation Is a Top Priority
Finding a way to harness big data is a priority for many digital marketers.  For email marketers, segmenting consumers based on a series of characteristics and finding ways to target those consumers is no longer a stretch goal, it’s a reality.   Via eMarketer.

Evan Prokop – Traveling in Australia?  Don’t Use Apple Maps, or You May Die, Warn Australian Police
Apple Maps has garnered plenty of criticism since its launch, but the recent warnings from Australian police are certainly the most severe.  Due to incorrect directions, several people have been led to remote areas far from access to food and water, leading Australian police to advise against relying on the service.  Via Search Engine Watch.

Jolina Pettice – 5 Ways Social Media Will Change The Way You Work in 2013
Last year 73% of Fortune 500 companies were active on Twitter. What does 2013 hold for social media and business? Read on to find out.  Via Forbes.

Brian Larson – It’s Not Just for Landing Pages – Split Testing In Twitter
While most marketers don’t need to be sold on the benefit of conducting AB or multivariate tests on their webpages, very few are taking that scientific approach to social. The first question to ask re this epidemic  (that may be overly dramatic) is ‘Why’.  I’d venture to guess the reason is that most marketers have not developed the processes to address the ‘How’. Luckily, Social Media Examiner has the laid out the game plan to address that very question.  Via Social Media Examiner.

Mike Odden – Arrests Over $850M Facebook Botnet Crime Spree
10 suspects in a Facebook cybercrime ring have been arrested in the US  UK and other countries  around the world.  Facebook users had been targeted since 2010.  Via BBC.

Miranda Miller – U.S. Online Holiday Spending Approaches $27 Billion
Online spending is up again this year, continuing a steady year-over-year growth trend as more consumers take to doing their holiday shopping online. comScore reports $26.6 billion has been spent in the first 37 days of the 2012 holiday shopping season, up 13% over the same period last year.  Via Comscore.

Mike Yanke – Holiday Traditions Falls As NORAD To Track Santa With Bing Maps
A long-standing holiday tradition, dating back five years now, will fall in 2012 as NORAD’s Santa Tracking will be supported by Bing Maps rather than Google.  Does this mean that Bing Maps are emerging as victorious in the online map wars – or does it mean that Google hates Christmas?  Because it can only be one or the other, after all.  Search Engine Land reports.

Time to Weigh In: Do you think that a site redesign is enough to get Yahoo! Mail users to spend more time on the platform?  Have you begun testing Google+ Communities for your business?  Have you ever run an A/B test on a social network?  What were the results?