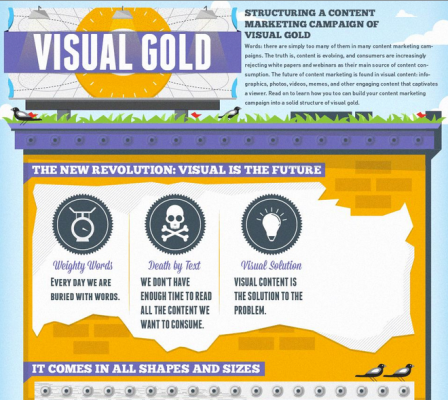 This new infographic from Marketo (client) takes a dive into content marketing campaigns of the future.  Those that focus on creating visually appealing content in a way that still creates value to the readers.  In this infographic you’ll find ideas such as:

Pope Joins Tweeting Masses With @Pontifex Handle
Benedict XVI will begin tweeting in eight languages beginning December 12th, 2012 using the handle: @Pontifex.  The pope will use Twitter to respond to questions live during his weekly general audience.  Not surprisingly, within only 10 hours of the announcement, Benedict had already reached nearly a quarter million followers.  Via The New York Times.

Google+ Adds Community Pages and Snapseed Vs Facebook and Instagram
It appears that Google+ Communities is Google’s strategy to go up against Facebook’s Groups.  These communities will allow users to create groups related to their passions and interests, and connect with similar people.  For ease of use, Google has made Google+ Communities easily accessible from the home screen.  Via Search Engine Journal.

Evernote For Business Is Here: Is It Right For Your Team?
Evernote’s personal organizer has now taken on organizing businesses.  One of the great features for business users is the Business Library.  This libray of content can be shared to with other team members and could be used for training, as well as a variety of other purposes.  Via readwrite.

Instagram Snubs Twitter: What Does That Mean For Brands?
If you’re a longtime Instagram user you may have noticed that recently your photos are not meshing well with Twitters platform.  Images are appearing too large and are cropped awkwardly.  Could this have something to do with Facebook’s recent purchase of the vintage inspired photo application?  Via PR Daily.

8 Ingredients of Effective Inbound Marketing for Generating and Qualifying Leads
Determining the exact moment when prospects will buy your products or services is next to impossible, but you can reach out to them at a time when they will be receptive to interacting.  This article shares 8 helpful tips for ways to begin targeting leads in a qualitative way.  Via MarketingProfs.

Miranda Miller – Promoted Tweets are now available in Asia through Twitter’s partnership with Komli Media
Twitter is partnering with Komli Media, who will manage all Twitter ad sales in the Southeast Asia. This is significant for Twitter, as they’ve identified the Asia Pacific region as one of their fastest growing opportunities. Komli are experienced in social advertising and already offer similar services to Zynga and Facebook, among others.  Via ClickZ.

Alexis Hall – 5 Graphics that Recap the Most Important Google SERP Changes in 2012
2012 marked another year of big changes for SEOs, including quite a few changes to the Google SERP page, including the Knowledge Graph and personalized search results. Check out these 5 graphical representations of the biggest changes to the SERP page in 2012, and industry sentiment around those changes.  Via Search Engine Watch.

Evan Prokop – The New MySpace: Here’s How to Get Started
Myspace has been reborn!  This article includes a slideshow filled with tips on setting up your new Myspace profile.  Many of these new features allow for customization as well as exciting ways to interact with content.  Via Mashable.

Time to Weigh In: Have you experimented with visual content by adding it to your content marketing mix?  Did you find that the reward was worth the effort?  Does Google+ Communities have a chance of competing with Facebook groups or should Google+ just give it up already?  Has Facebook made a big mistake by messing with Twitter’s integration with Instagram?