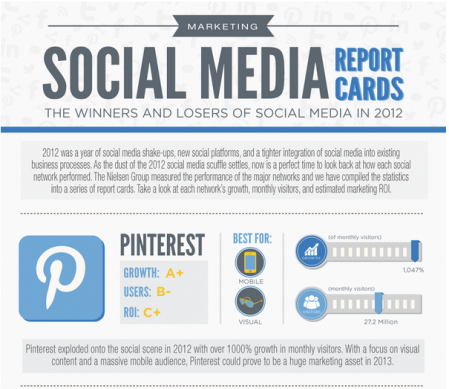 This recent infographic from Pardot features the social media platform winners and losers in 2012.  You’ll find scoring based on growth, number of users, ROI as well as insight into which platforms are best for mobile, visual, or connecting.

Up Close With Facebook Graph Search
First off, what is Graph Search?  Facebook has amped up its search capabilities by rolling out this new feature.  Danny Sullivan’s article provides a step by step deep dive into using Facebook’s new Graph Search.   Via Search Engine Land.

The New Myspace: What A Mess
The recent launch of Myspace’s new design has left many users wanting more, or is it less.  The interface is confusing to navigate and includes a lot of scrolling that you might not have anticipated.  Also, might of the site appears to be one giant ad for Justin Timberlake.  Via CNN.

6 Ways To Use The New LinkedIn Features to Get More Business
This article shares tips on using LinkedIn to make better connections, engage and create more business.  In a recent up date LinkedIn released the new user interface to its entire membership. Via Social Media Examiner

20 Content Ideas Readers Love
One of the biggest challenges for marketers using social media is finding enough interesting and unique content to share with their followers.  This post provides 20 different content ideas to better attract and engage your online audience.  Via ragan

Jolina Pettice: Over 85% of Marketers Plan to Raise Their Mobile Budgets
Over 85 percent of marketers are reporting that they plan to increase their mobile advertising budgets, according to a new study.  Find out what is motivating marketers to go mobile and what common concerns are in trying to reach this massive, on-the-go market.  Via ClickZ

Rob Bayne: MySpace Facelift Goes Public
Will partnering with the online advertising company Specific Media and superstar Justin Timberlake be enough to revive the once social network behemoth Myspace from a long slumber? The facelifted version of Myspace is now available to the general public, have you signed up yet?  Via Telegraph.

Evan Prokop: Google CEO Says Facebook Is Doing A “Really Bad Job” With Its Products
In a recent interview, Google’s CEO Larry Page expressed some harsh criticism of Facebook, saying the company was admittedly strong in the social space, but was lacking in the way they handle their products.  Via Mashable

Brian Larson: LinkedIn Eclipses 200 Million Users – Poised For More Growth
A new year and a new milestone. This month LinkedIn – the social network originally thought of as nothing more than a place to list your resume – eclipsed 200 million users worldwide. While there’s no doubt LinkedIn continues to be a powerful platform to recruit new talent, it’s the advancements they have made in increasing engagement within the channel that is starting to get attention. Learn about what LinkedIn’s growth means for marketers (and everyone else) in this post from Search Engine Watch.

Mike Yanke: Bing Sidebars Growing Larger
As Facebook made headlines this week with the launch of its Graph Search, Bing quietly launched its own update by enhancing its Social Sidebar feature.  Read this story in Search Engine Land to learn more about the engine’s plans to expand its social sidebar with five times more content.  Via Search Engine Land

Time to Weigh In:  Which social media channels had the largest impact on your business in 2012?  How do you think Facebook’s new Graph Search will affect the way that businesses use the social platform?