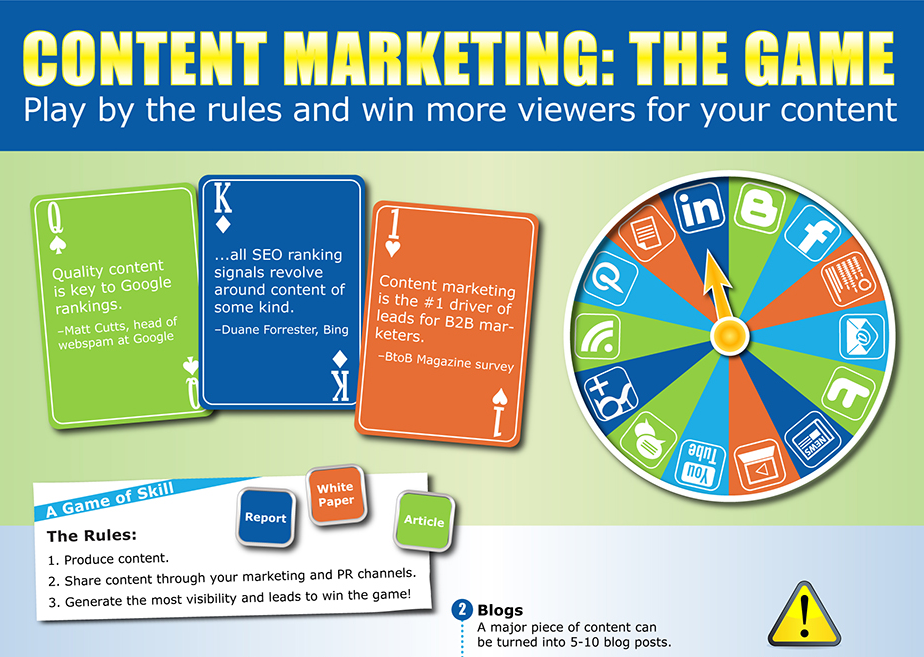 While it’s certainly true that promotion is important, the infographic misses the mark in exactly when this becomes an important consideration. As TopRank CEO Lee Odden has said time and again, the time to think about how a piece of content will be discovered and shared is in its planning. Content promotion should be baked in from idea conception; thinking about how you’re going to get people to read your next big piece after you’ve finished it means you haven’t accounted for your audience’s needs at all in the creative process. You’re already late to the game.

Facebook’s Graph Search Might Just Make You Look Like a (Cheating) Moron
As marketers trip over themselves trying to figure out how to best take advantage of the deep insights unearthed by Facebook’s Social Graph Search, pundits are having a ball with it. A man named @TomScott has launched a Tumblr to compile the strangest, creepiest and funniest actual Facebook Graph Searches on the planet. Among them: ‘Married People who Like Prostitutes’ (hat tip to Forbes for that headline), ‘Current employers of people who like Racism,’ and of course, ‘Single women who live nearby and who are interested in Men and like Getting Drunk!’

Google Sees More Massive Growth with $14.42 Billion Revenue in Q4 2012
The search giant has again exceeded expectations and cemented their dominance with a 36% YoY increase in revenue. Notably for marketers, the aggregate cost-per-click on the Google network was down 6% from the same period in 2011, while paid clicks volume increased 24%. Via ClickZ.

Tumblr Makes Over Dashboard, Geeks Rejoice
Tumblr users were introduced to a “sexier,” more user-friendly dashboard early Thursday. Bloggers can now manage multiple Tumblrs from one account and more easily add content. If you’ve held off using the platform for marketing, it’s high time to give it a shot; the new dashboard plus the late-2012 addition of (long overdue) analytics makes it a serious contender on the social content scene. Via Mashable.

Brick & Mortar Retailers Adjusting In-Store Pricing to Match Web Store Rates
Real-world stores like Toys ‘R Us, Staples, and Best Buy are taking a page from Amazon’s book and experimenting with on-the-fly price adjustments, based on web pricing data. Retailers are increasingly embracing technologies that allow them to compete on price in real-time, according to retail data firm Dynamite Data. Via AdAge.

Google Rolls Out 24th Panda, Impacting1.2% of Search Queries
Google has confirmed a Panda refresh, making this the 24th version of their cuddly algorithm designed to slowly choke the life out of websites with low quality content. The last update, in December, affected only slightly more English language queries (1.3%). Via SearchEngineLand.

Jolina Pettice Shares the Impact of Twitter on Brands Infographic
What is the impact of Twitter on brands? Find out which major player saw an 1800% increase in positive brand mentions and which attributes their top five sales day EVER to Twitter. See more in this infographic, which highlights 5 well-known brands – including LG, Cadbury and Virgin America – and the rewards they are reaping from the channel.

Mike Odden Gives Google’s Faster Image Search a Thumbs Up
Google has announced a new, faster image search. If you like using Google search to look at images of things like, say, cows with guns, the experience will soon be faster and provide more detailed metadata. Instead of redirecting the user, it will be right under the clickable hosting page and there are now four clickable targets to the image source page instead of two. This latest iteration of Google Image Search does bear a striking resemblance to Bing’s image search… though we’re sure that’s just a coincidence.

Ashley Zeckman’s Recommended Reading: Facebook More Memorable Than Faces or Books
A new joint study from the Universities of California and Warwick has found that status updates are 1 1/2 times more memorable than sentences from books and 2 1/2 times more memorable than faces.  According to the study, part of the reason status update information sticks with us is because of the unfiltered and spontaneous way in which it is written.  Via Mashable.

Evan Prokop Shares Important Tip for Content Publishers Based on “Online Truth” Study
A recently published study shows that people tend to believe false information and untruths, even when a correction is published immediately. While this may not be news to many people, the findings of this study should be at the back of every online marketers mind when publishing content. It’s important to get your facts right the first time, as inaccurate or mistaken information may take on a life of its own.

Spotlight on TopRank Online Marketing in this Week’s News:
Forbes: Tell, Don’t Sell. Use Content Marketing to Boost Your Business.  Consumers are blind to ads and search for what they want and when they want it. How can brands connect with the empowered consumer? Through content. “If you’re not creating content on the web, you don’t exist” says TopRank CEO Lee Odden in the article that offers 5 tips for more effective content marketing.

How do you think Facebook’s Social Graph Search can be used by online marketers (in a not-creepy, completely not voyeuristic way)? Are you winning the content marketing game, or could you use a bit of coaching? Will real-time price updates in-store make it harder for online retailers to compete, or does the convenience outweigh any cost savings? Sound off in the comments.