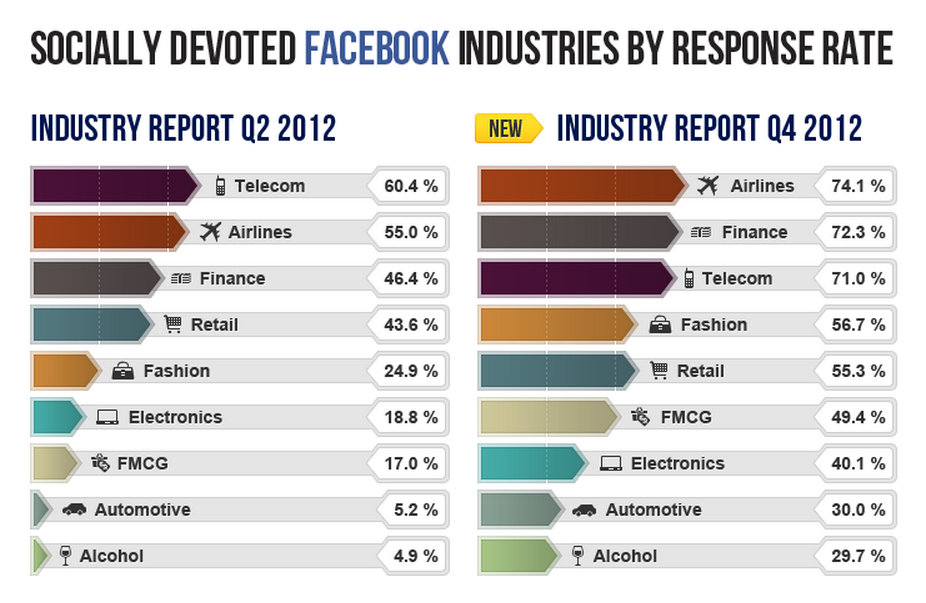 In order to be successful on social media channels, regardless of your industry, marketers must be socially devoted, say researchers at SocialBakers.com. Their latest Socially Devoted report and corresponding infographic shows that brands on Facebook have made great strides in both speed and volume when responding to fan interactions with their Company Page.

Among their Q4 2012 findings, SocialBakers reports:

“In the last year, there has been a shift away from brands simply seeking to collect the highest number of fans. What is important is how you interact and how you serve them,” said Jan Rezab, CEO of SocialBakers.com. Social devotion is measured using a number of factors, including how the Facebook page is set up, whether brands respond to fan questions at least 65% of the time, and the rate of response time.

While Brands Become More Devoted, Are Facebook Fans Turning Away?

On the heels of the Social Devotion study, Pew Internet finds that fully 61% of Facebook users say at some point, they’ve taken a voluntary break from using Facebook for several weeks or more.

Of those who took a self-imposed Face-cation, 21% cited other demands on their time, or simply a lack of time for Facebook, as the reason. Other top reasons were a lack of interest in the site itself, a feeling that it was a waste of time or the content was not relevant, and too much drama, gossip, negativity or conflict. Just 4% reported they’d taken a break due to concerns about privacy, spam, or advertising.

While breaks from Facebook may seem an interesting trend, the effect on brands should be negligible. Facebook’s latest earnings report shows a 25% increase in monthly active users and 28% more daily active users, compared to the same period in 2011. 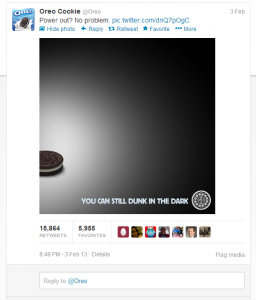 In the moments following the power outage heard round the Twittersphere and in just about every American single living room, a few brand marketers hit out of the park home runs simply by seizing the moment.

Oreo earned over 10,000 retweets in the hour after they blasted an image that took just minutes to make out to their Twitter following. “Power out? No problem,” the tweet read, accompanied by an image that read, “You can still dunk in the dark.” In total, the tweet garnered over 15,000 retweets and 5,000 favorites. Oreo execs and members of their agency were together in a social media warroom of sorts and made the decision in minutes, according to Ad Age.

Tide also proved quick on their feet; they capitalized on the popularity of the #blackout hashtag with this tweet:

“We can’t get your #blackout, but we can get your stains out. #SuperBowl #TidePower”

Tide’s tweet was also accompanied by a quickly mocked up, branded image.

Retailer Walgreen’s took the opportunity to “We do sell candles. #SuperBowl,” followed shortly after by, “…we also sell lights. #Superbowl.” Each received thousands of retweets.

Considering the millions spent on producing and airing ads on Super Bowl Sunday, these brands made out like bandits by keeping one eye on the game and the other attentively manning their Twitter accounts.

Tracking the 53 commercials from kick-off to the final play, Search Engine Land‘s Vanessa Fox found that over 80% had an online CTA. Interestingly, those commercials released as teasers online ahead of the game most often used their Facebook URL as the call to action, while commercials aired on TV were more apt to direct viewers to the Twitter account or a hashtag.

“In some ways, this seems like a great strategy, as hashtags work best as a moment in time discussion, and Facebook is better at comments left over time,” Fox wrote. Still, eight Super Bowl commercials had no call to action at all. No official word yet on whether no CTA at all or asking people to Shazam your commercial (as Jack in the Box did) resulted in a greater ROI.

Wednesday, February 20th, NASA will host 150 of their social media followers and their guests at their Washington Headquarters. The group will spend the first half of the day communicating via social media with three astronauts aboard the International Space Station. Kevin Ford, Tom Marshburn and Chris Hadfield will chat live with participants from 240 miles above Earth. 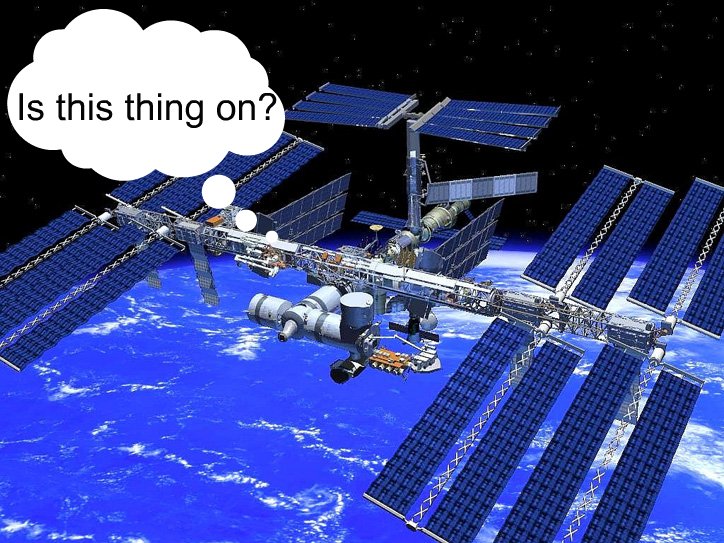 One caveat: though entry to the contest is open to citizens worldwide, NASA is not offering assistance with travel or accommodations. However, they explain in the FAQs about the event, “If you cannot come to NASA Headquarters to attend in person, you do not need to register for the NASA Social. However, you can still plan to follow along with the event on Twitter via the hashtag #NASASocial.”

We can only hope that after perfecting communications between Earth and the space station, NASA will get to work on furthering their understanding of Google Hangouts, where the trip to Washington wouldn’t have been an obstacle for fans!

Best Super Bowl Commercial in the History of Ever: The Clydesdales “Brotherhood”

It’s official, 9 out of 10 people who recommend things recommend Budweiser’s latest Clydesdale commercial for the completely unscientific and quite possibly imaginary Best Commercial in the History of Ever award I might have just made up.

I’m quite sure there are still a few people left on the planet who haven’t seen “Brotherhood,” since it only has 10 million views in the six days since it was posted pre-game. The CTA at the end of the video asks viewers to participate in naming the baby Clydesdale featured in the beginning of the commercial, who was just days old during filming. Without further ado, enjoy!

In answering a question regarding the importance of PageRank, a tool that has been long removed from Google Webmaster Tools and had its importance downplayed for years, Google’s Matt Cutts provided a rather ironic response.  In this video posted by Search Engine Land, Cutts indicated that some in the industry suffer from ‘tunnel vision’ regarding PageRank, assuming that it’s been completely abandoned by web searchers.  In fact, he continues, several web searchers still use this tool to evaluate the authority of a website they are visiting.

Is this true, Yanke asks?  Or is Cutts suffering from an alternate form of tunnel vision, assuming searchers are still using PageRank, as a reason to keep an ego-tool alive? A rather serious question now – will anyone out there admit to using PageRank?

Social media engagement, however, still tops the list for 38% of marketers, who admittedly aren’t as excited about it as they once were. In 2012, 54% identified social media engagement as the most exciting digital opportunity, which fell to just 35% for the coming year.

Within hours of signing a new global yet non-exclusive contextual ad deal with Google, Yahoo’s stock rose more than 1.5%.  Contextual advertising ensures ad content is in direct correlation to the content on the web page.  This alliance is likely to help boost Yahoo’s search revenues, provide Google with additional ad space, and allow website owners housing these ads to keep roughly 68% of the revenue generated, according to a Yahoo Finance report.

In an acquisition deal that almost makes too much sense, Google has acquired eCommerce solution leader, CI. Google’s mission (don’t roll your eyes) is to provide visitors with a quality search experience. CI’s mission is to make it easier to users to “find and buy products”. See where this is going? Learn more about the details of this acquisition at Search Engine Watch.