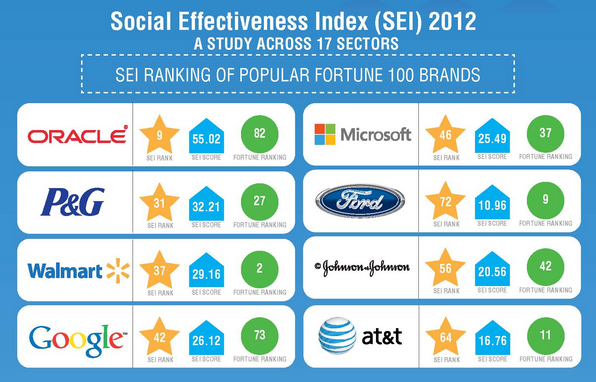 Who ever said only B2C brands get to be popular on social networks? The two companies sitting atop the Social Effectiveness Index just happen to be B2B brands Honeywell International, an aerospace and defense contractor, and financial services company American International Group. MetLife, Aetna, Chevron and Walt Disney all made the top ten.

The presence and effectiveness of Fortune 100 brands were measured across five areas: share of voice, identification of influencers and advocates, engagement rate, touch rate and net sentiment. Goldman Sachs topped the list in the banking sector, while Kraft Foods takes the cake as the most effective Fortune 100 in the food & beverage social space. Researchers from Blue Ocean released their findings in the form of an infographic, as well as a report listing their methodology and the results for all 100 brands evaluated.

In 2012, email was the number one marketing channel priority for 25.8% of respondents to an industry survey. Social media came second, with 24.3%, while SEO and Content Marketing tied, each taking 18.9%.

2013 will be a year of radical change, if this study is to be believed.  Researchers found that 34.8% of respondents plan to focus on Content Marketing in 2013, which beats second place Social Media (24.7%) by 10.1%. Email marketing was knocked from its throne and will only to be a focus for 10.4% of marketers. The survey was conducted by CopyPress, though their sample size of under 400 participants leaves much room for misinterpretation. While it’s not scientifically sound, the survey does reinforce the now almost universally accepted fact that content is here to stay.

With over 43 million views, the U.S. State of the Union address and the follow-up responses from political parties attracted a substantial audience. That exposure also included a cameo of Poland Spring inspiring the hashtag #watergate when Florida Senator Marco Rubio made an off camera reach for drink in the middle of his response to President Obama. The Twitterverse lit up in anticipation of what Poland Spring would do to capitalize on this opportunistic exposure. Not a single Tweet followed. This was a missed opportunity that companies like Oreo have recently taken full advantage of when it created clever ads after lights went out at the Super Bowl. TopRank CEO Lee Odden was quoted in articles on MediaPost and Econsultancy that social media monitoring to identify and respond to brand mentions is a cost of doing business and if companies do not listen to the social web, their competitors will.

Social ads are an increasingly important facet of a balanced online marketing campaign, though ROI remains a concern, according to survey data released by Neilsen company Vizu. Marketers use social ads for branding more than other objective, with 45% indicating that was their goal. Just 16% of respondents said their social ads were direct response in nature.

About 83% of marketers surveyed choose to run social ads in tandem with their online display campaigns, while 46% use them as part of their video marketing strategy. Social ads are reportedly used with mobile by 40% of marketers. “With paid social media advertising on the rise, it’s no surprise that marketers are beginning to look for true measures of return on investment to justify their investment,” said senior VP of product leadership for advertising effectiveness at Nielsen, Jeff Smith. “And with paid social ads increasingly part of integrated, branding-related campaigns, there is real demand for metrics that are consistent with what they’ve used for other media, such as brand lift and sales lift.”

Tweeting Will Become: Say What You Mean in 140 Characters, 1 Instagram Pic, 3 Video Clips or Less

Smart marketers better start familiarizing themselves with the latest social video craze, Vine. A tweet from Twitter CEO Dick Costolo seems to suggest the app is coming as a new feature to Twitter.  Costolo tweeted “Steak tartare in six seconds” Wednesday, with an embedded vine demonstrating his tartare-making prowess. Vines are six-second videos consisting of up to three pieced-together video clips, which are then shared to Vine and can be shared to social channels. The app seemed so promising that Twitter scooped up the company before it had even launched. 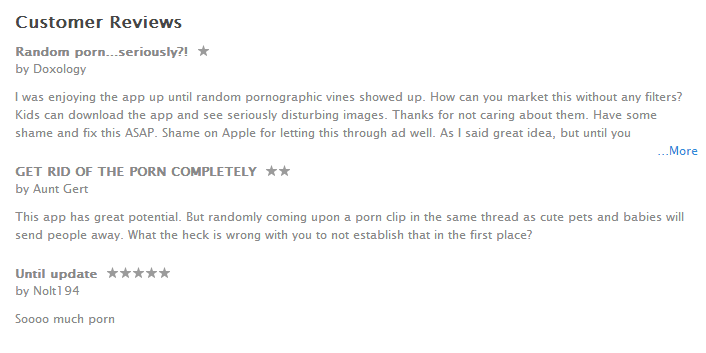 America’s Most Promising Companies, released by Forbes this month, finds itself heavily populated with software companies designed to help better manage / reduce the pain of online marketing tactics.  From malware blocking software AnchorFree, to programmatic buying platform Rocket Fuel, several of the companies on this list will no doubt shape how customers and prospects alike consume online marketing material over the next several years.  Special congratulations to 3Cinteractive, enterprise mobile solution provider, for topping this list.  See the full list of America’s 100 Most Promising Companies by visiting Forbes.

Following Google’s Penguin update, many webmasters were sent the dreaded “unnatural link warning”. For many, the next logical question was which links specifically were to blame for the warning? In a recent video in the popular Google Webmaster Help Series, Matt Cutts spoke about a new feature that will be rolling out soon, wherein link warning messages will be accompanied by 1-3 examples of negative links from the offending sites link profile.

Facebook’s Graph Search is still in limited beta; users without access can sign up to the waiting list for notification when it becomes more publicly available. Facebook search has always shown search results contextualized to the user, but early adopters say the improved functionality with the graph may result in more meaningful searches for social media marketers. The emphasis will remain on building social community for business and individuals, according to Social Media Examiner, in order to increase the  likelihood of showing up in relevant Facebook search results.