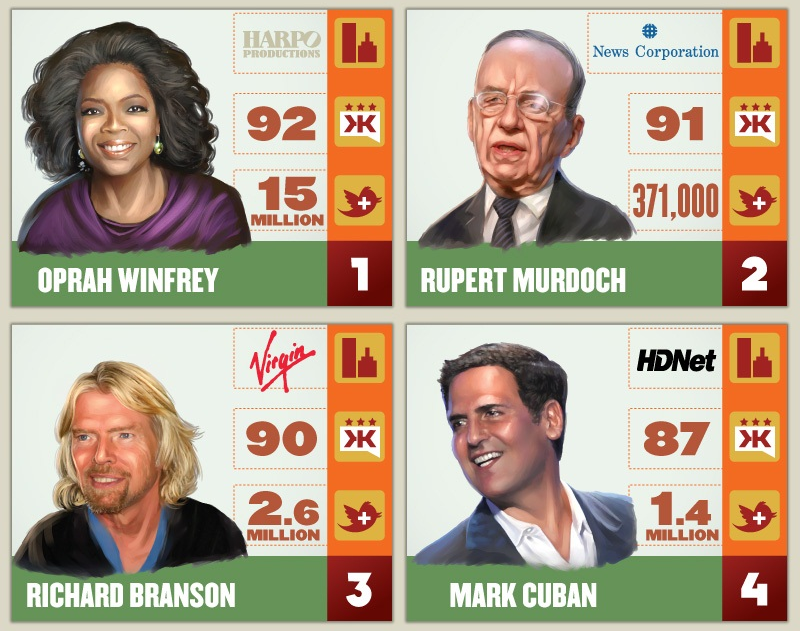 Oprah, Rupert Murdoch Most Influential CEOs in Social Media (or Infographics: This Is How You Do It)

In a brilliant display of content marketing prowess, TopManagementDegrees.com has released a caricature infographic illustrating the 40 CEOs most influential in social media. Oprah tops the list with a Klout score of 92, followed closely by Rupert Murdoch at 91, which just goes to show that social influence is not a popularity contest.

Virgin’s Richard Branson, HDNet’s Mark Cuban, and Jack Dorsey of Square round out the top 5. The top 40 is rife with the usual suspects; tech and marketing CEOs from Twitter, Salesforce, Foursquare, Dell, LinkedIn, etc. One surprising find: Facebook CEO Mark Zuckerberg failed to break the top 50.

The infographic is based on information offered in a November 2012 roundup entitled The Most Influential Execs on the Web, by Klout and Reuters. Even so, the more visual representation of this data is getting a lot of play and subsequent link love from around the web; News.com.au, Visual.ly, Social News Daily, TechJournal.org and yours truly have all picked it up. Why? Content Marketing 101: Original, top quality content is a winner every time.

In this case, it’s incredibly well done and the graphics are killer, though it is confusing that there are no ads, affiliate links or even some kind of call to action on the site itself. Content Marketing Lesson #2: let people know what it is you want them to do as a result of engaging with your awesome content. I want to click something… please give me something to sign up for. Maybe they made this out of the goodness of their hearts? 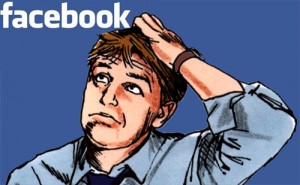 Long story short, Microsoft has been trying for six months to unload Atlas Solutions, their ad-serving technology platform, in order to focus on other aspects of their ad business. Some speculated that Facebook’s acquisition of Atlas Solutions meant they were getting ready to break out of the box Mark Zuckerberg built and take on advertising goliath Google across the web.

Not so, says Facebook’s director of product marketing, Brian Boland. Marketers have been crying for more effective tools to measure ad performance and more accurately attribute sales/conversion activity to ad clicks. “This acquisition is about measurement, it is not about building an ad network,” Boland told AdAge, adding that Facebook intends to invest in Atlas’s core technology, as well as new areas like mobile ROI. “We’re excited to apply the same level of focus and investment in Atlas that we’ve applied to mobile over the last year, and really accelerate the development of its core features,” he said.

It is not yet known whether Atlas technology will become standard issue for Facebook advertisers or some kind of premium product. At this point, anything that helps marketers actually understand their social advertising ROI on the biggest network on the planet is welcome and long overdue.

The folks at Chinese social monitoring platform Soshio released the results of their multi-faceted social sentiment analysis of the Oscars this week. Analysts first tracked mentions of the keyword “Oscars” to evaluate sentiment on a simple scale and found that overall, just 22% of mentions were positive, while the vast majority were neutral.

71% of the conversations were happening on Sina Weibo, followed by 16% of all posts sampled coming from Tencent. “We also saw activity on Twitter (7%) happening in Chinese, though we expect that most of it came from the US or Taiwan, as Twitter is blocked in China,” writes Ken Hu, Soshio’s president and founder.

They then used a context cloud to gauge the popularity of specific topics amongst Chinese social media users. Ang Lee was the second-most mentioned topic of the event, followed closely by the movie Argo. Soshio seeks out emotion in social posts, ranging from fear, anger or sorrow, to joy, desire and love, and even loathing. “Using the keyword ‘Oscars’ we registered that numerous conversations were happening around Ann Hathaway and Ang Lee. Posts peaked after it was announced that Ang Lee won his award for best Director.In regards to Anne Hathaway, people made comparisons to Audrey Hepburn during the 26th Oscar Awards in 1954.”

Google has again released a statement reminding webmasters of their position on selling links that pass PageRank: don’t do it. If someone approaches you and offers to pay for links or entire advertorial pages with embedded links that pass PageRank, just say no. “We do take this issue very seriously, so we recommend you avoid selling (and buying) links that pass PageRank in order to prevent loss of trust, lower PageRank in the Google Toolbar, lower rankings, or in an extreme case, removal from Google’s search results,” writes Matt Cutts, Distinguished Engineer at Google. I don’t think he wants you to sell links.

Cutts’ post was subsequently removed from Google’s search results for using the word “PageRank” 10 times for a keyword density of 3.33% in the announcement.

Chase Platinum Business and Virgin Mobile USA are two more big brands investing in content marketing and partnering with those that already have an audience, like Business Insider. Content consumption across multiple mediums isn’t slowing, making it essential for brands – large and small – to develop a variety of content that will attract and engage their audiences.

Google+ Sign-In Is your New Key to Apps and the Web – Alexis Hall, Accounts

Google+ announced Google+ Sign-In this week.  Similar to Facebook Connect, the new authentication functionality will allow users to carry their Google identity outside of Google properties to a growing number of apps and websites.  With this step, Google continues to further integrate its functionality into the everyday social landscape of its users.

For many, Google Analytics represents a deep well of information from which powerful, data-driven decisions can be pulled that will significantly impact online marketing results.  It should come as no surprise then, that Google has applied the same types of data principles to other segments of their business – most notably, human resources.  In this article published by ere.net, we learn more about Google’s fascinating and singular ‘People Analytics’ processes – which HR thought leader Dr. John Sullivan has credited with helping the company become the third most valuable in the world.

This Week in the @TopRank Social Community

Our social community across Twitter, Facebook, Google+ and LinkedIn rocks! What were @toprank tweeps talking about this week? This streamgraph tool from Neoformix gives a high-level overview of the most popular topics in the @TopRank social community over the last 1000 tweets. Marketing, of course, is a recurring theme, as are content, innovation, tips and B2B.

The really awesome thing about this tool is that the graph is interactive; clicking on a topic above a date point (which you can’t do here, but go visit the site) allows you to see the tweets associated with that keyword. You can analyze your own account (or a competitor’s), a keyword, or even a Twitter list. 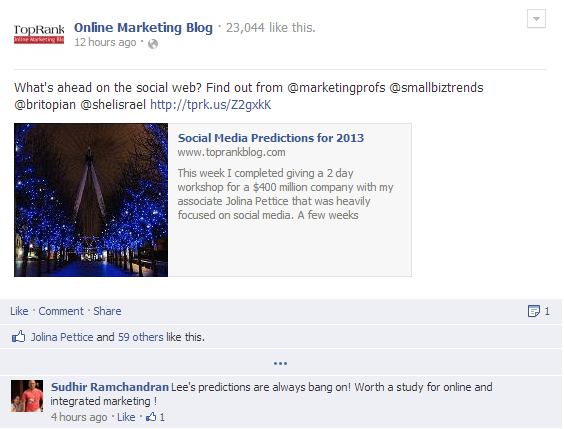 Meanwhile, our Facebook community loved the announcement of Dell’s new e-book, Social Media Predictions for 2013. TopRank Online Marketing CEO Lee Odden shared his advice, insight and predictions for social marketers, from hashtag behaviors your social fans will hate, to which social media metrics are over or underrated and more.

What did you think of the Top CEOs in Social infographic; were there any surprises or people you felt should have been included on the list? Share your thoughts on this and all of this week’s news in the comments!