Businesses Plan to Spend More on Email Marketing in 2013

A new report from iContact found that 56% of businesses surveyed plan to increase their email marketing in 2013. Just 1% said they plan on cutting back. Other key findings from their survey of SMBs with revenue between $1 million and $50 million include:

Download the full report from iContact for more insights, or see their corresponding infographic here.

Google announced four changes this week to their GA real-time reports, allowing marketers to see more of what is happening on their site at any given moment. 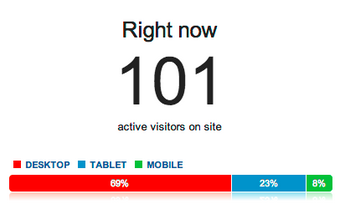 The team at Google announced, “Stay tuned for continued improvements to real-time, a growing area of importance for your digital marketing.”

Emails with social share buttons have a 158% higher click-through-rate than those without, according to a GetResponse study. Still, just 29.6% of marketers use them. Among those who do, Facebook Share buttons are most popular, with 99% of marketers including them in their email campaigns. Twitter buttons are used by 99%, while LinkedIn buttons are present on 68.1% of emails with social share buttons.

eMarketer has had to revise their Twitter revenue forecast, in light of the social media company’s unanticipated success in social advertising. In 2014, Twitter should take in $950 million, according to the latest estimate. One year ago, eMarketer predicted 2014 revenue of $582.8 million for Twitter; in September, they upped their estimate to $807.5 million. By 2015, they say, Twitter’s annual revenue will skyrocket to $1.33 billion.

Coming Up in the @TopRank Community

Tune in to the @toprank Twitter feed Tuesday, April 9th at 2:45pm ET (11:45am PT) for highlights from Lee Odden’s Social Media World presentation, How to Integrate Blogging with Content Marketing that Inspires Action.