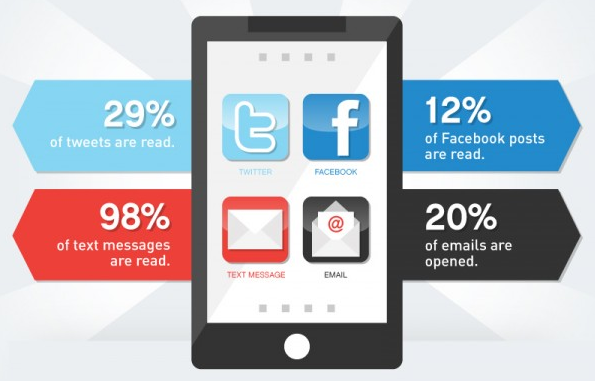 Text messaging open rates are far superior to those on Facebook, email and even Twitter, according to this latest infographic from SlickText.com. In addition, SMS coupons are ten times more likely to be redeemed and shared than mail or newspaper coupons. Almost all text messages are read within the first five minutes, they claim, which makes sense as the average person checks their phone over 150 times per day. See more insights at SlickText.

Eric Schmidt Predicts “Entire World” Will be Online by 2020

Never mind that just 38% of the world’s population use the Internet today; within a decade, every person on the planet will be connected through the web. So said Google chairman Eric Schmidt recently in a public Google+ status update.

The post sparked a flurry of discussion around the possibility that every single person on the planet, particularly those in developing countries, could so soon have access to the web. Schmidt attempted to revive the conversation a few days later in a post that read, “Think about how great the internet is with 2B users. Now think about how amazing it will be when 5B come online in a decade. #NewDigitalAge.” However, it didn’t come close to touching the popularity of his first post, with 570 +1s, 90 Shares and close to 100 comments.

Googler John Mueller submitted a question to webspam czar Matt Cutts for the popular GoogleWebmasterHelp series and – surprise! – Cutts featured his inquiry in this video:

If your timeline allows it, said Cutts, avoid adding too many pages to your site too quickly. He also notes that it is a rare occurrence that a webmaster would have such a volume of content at their disposal that this would be much of an issue anyway. But hey, if you have a few hundred thousand articles laying around, you may want to stagger their publication.

Facebook Video Ads May Cost You Your First Born

The price tag on Facebook’s impending video ads may leave all but the largest advertisers with a serious case of sticker shock, given that the commitment is reportedly in the 7-figures range. Facebook expects to bring in $4 million a day “right out of the gate,” according to AdAge. The video ads are expected to launch this summer.

It’s a question mulled over by some, though most would prefer not to think about it: what happens to your digital assets after you die? If you opt in to Google’s new Inactivity Account Manager, you can choose to have your data deleted after a waiting period upon your demise, or sent to a third-party. After your selected period of inactivity, Google will attempt to contact the user before passing on or deleting information from Blogger, Gmail, Google+, Drive, Picasa Web Albums, Pages, Google Voice and YouTube.

It’s a much-needed service; Facebook has offered to “memorialize” users since 2009. Necessary or not, we’ll still file these two digital services under creepy.

eBay to Throw Open the Data Gates for Advertisers

Following in the footsteps of online advertising giants Amazon, Google and Facebook, eBay plans to launch commercial ad products sometime this year. According to AdWeek, brands will need to go through eBay to run ads buoyed by the company’s user data.

Local media analysts at BIA Kelsey have released their latest US social ad revenue predictions, calling for an 18.6% compound annual growth rate to $11 billion by 2017. Mobile local ads should see the greatest increases, with 49.3% growth. 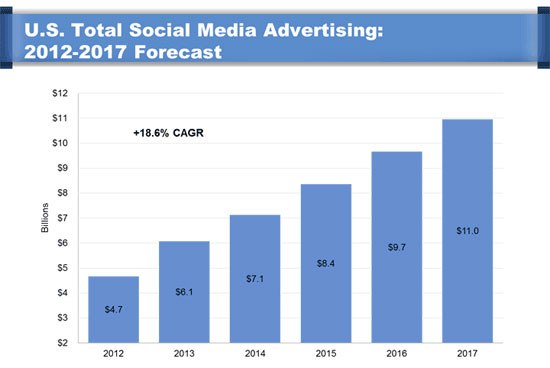 This Week in the @TopRank Community

The @TopRank social community was hopping this week, as readers flocked to SlideShare to check out #ThingsICarry and to Twitter for #whatthefoc, MIMA’s Future of Content event. Yes, we had a lot of fun with hashtags this past week.

In case you missed it, #ThingsICarry is an initiative started by LinkedIn and SlideShare, where influencers and thought leaders share their favorite tools. Check out the things TopRank CEO Lee Odden can’t live without:

Hundreds of #whatthefoc tweets captured the highlights and takeaways from the Future of Content event Wednesday evening, where Odden shared insight into upcoming content trends marketers should keep an eye on. It’s not too late to join the conversation; stop by and let us know how you see the future of content. Here are just a few from recent days: 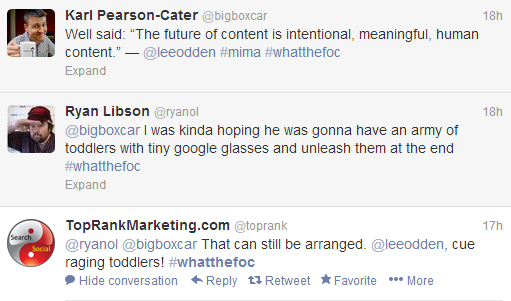 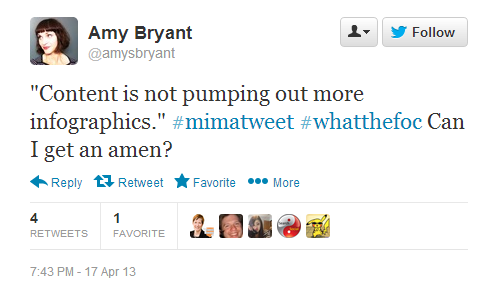 Check out the @toprank Twitter channel and stay tuned to #trnews for breaking news across the digital marketing landscape in the weeks ahead!