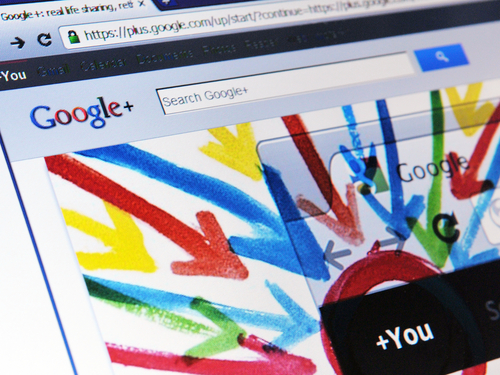 Google Digs Deeper into Social Business: As a key part of Google’s approach to the Social Business market, they last week launched the Google+ API Domains. The feature, which will allow companies to develop business tools over the Google+ platform, consolidates the social network as a solution that aims to meet the needs of the enterprise user not only in making connections and social relations within the corporation, but also as an enterprise tool for communication and collaboration – a niche which has never “attracted interest from Facebook.”

The Wired article entitled, “Google+ Focuses on Area Facebook Ignores: Corporate Social Networks” may be missing the entire story. Microsoft’s operating system is entrenched across corporate America, with Sharepoint already providing the corporate intranet connection for many. Facebook may not be the loser here. This latest adventure outside the Googleplex will be one to watch.

Google’s World Wide Crash Took 40% Of Internet Traffic Down With It: Google was down between 1-5 minutes globally, which is unprecedented. While the direct cost to Google is estimated at $500k, as a major source of internet activity, the economic impact was much larger. Business Insider

Amazon Offline: Google wasn’t the only major site that went down, Amazon was down in the U.S. and Canada for about 40 minutes, costing the company $5 million. VentureBeat

Facebook CEO Announces Internet Access Project to bring the web to 4 billion:  Chief Executive Mark Zuckerberg said the company is teaming up with internet.org to help bring Internet access to more than four billion people in emerging countries who still don’t have it. Wall Street Journal

Google Glass app lets you comparison shop and read reviews: If retailers weren’t worried enough about showrooming, “glassrooming” comes on the scene with an app developed by a Google Glass hacker. Venture Beat

Google Glass Not for Sale Until 2014 – The current design for the head-mounted display/computer is most likely final, sources say, but that alternative frames may be an option. For Glass fans, this means there will be no connected headgear this holiday season. Mashable

The New J.Crew Catalog Is a Pinterest Page: The power of Pinterest is well known for online retailers and major catalog marketer J.Crew is going all in with it’s new catalog on Pinterest. Adding social features to an ecommerce site is one thing, but adding your product to a social network is a trend worth noting.  Businessweek

Podcasting is Back and Booming – Apple just surpassed 1 billion subscriptions for podcasts via its iTunes app, which is a major milestone for a category that had been considered an also-ran. Capitalizing on this growth, iTunes will be launching iTunes Radio, which is billed as a way to get personalized radio like Pandora. USAToday

US Total Media Ad Spend Inches Up, Pushed by Digital – New research reveals that both video and mobile spending are expected to rise this year. Mobile alone will grow ad spending even more quickly than digital as a whole; mobile is expected to account for 15.8% of all ad spending by 2017, or $31.1 billion with video the fastest growing. eMarketer

Buffer Now Lets You Post and Schedule Content to a Google+ Page – Popular social sharing service, Buffer, which auto-schedules updates to optimize your sharing across social networks, has become one of the first third party clients to support Google’s new domains API for Google+. For now, though, it’s focusing on serving business and corporate users. TheNextWeb

A Marketer’s Guide to Retargeting on Facebook [Infographic] – This infographic examines Facebook Exchange (FBX), Facebook’s retargeting ad platform, which enables advertisers to execute real-time bidding for the social network’s impressive ad inventory. With multiple options for advertising available, leveraging these options to optimize advertising is important for any brand. Mashable

Where Do You Fit in the New Retail Web? – With the rise of a new wave of online retailers, there are two clear models emerging in the online retail space: utility vs. experiential. The fight promises to be one of the hottest yet seen on the web. Read these top tips to learn the keys to success. Mashable

Twitter Experiments with Trending TV Box on Some Users’ Timelines – The feature provides both the details of a given show as well as a list of associated Twitter accounts. The box isn’t a permanent fixture. While it will appear on its own, users can close and scroll past the box to return to their personal feeds. Engadget

On “The Future of Content on the Search and Social Web”, Tara Geissinger said, I like that you talk about figuring out what stage your company is in. It’s easy to look at what “everybody” else is doing and assume that’s where you are too. That’s not always the case! It used to be that you could optimize a good article, self-publish and see an immediate boost in visibility. Content marketing requires a lot more strategy now! 🙂 To see results now, we need to combine quality writing, social sharing and strategic SEO.

On “5 Content Marketing Tools for Better Planning, Management  and Tracking”, Lance E. Carlson said, Being more than a little ADD These types of tools help a bunch. The editorial Calendar is especially helpful.

On “The Role of KPIs, Marketing Goals & Business Objectives in Online Marketing”, Innovation said, Sounds like a solid business model to weight efforts and metrics against. A formidable baseline.

Would you use Google Glass to check products pricing in-store? As a consumer, have you been on the receiving end of Facebook’s retargeting? Do you listen to podcasts more often?

Have a great weekend and thanks for reading!