We all have friends. One thing that makes us friends is that we have things in common, and what we have in common are our personalities and our interests. We interact with others based on those things—and with the social atmosphere so crucial to a brand’s persona, they want to be our “friends” too.

2013 has been a great year for content marketing. Savvy marketers have come up with new, unique ways to create bonds with their audiences, encouraging interaction and ultimately intent to purchase. Viral has become a buzzword that many strive for, yet few achieve. But regardless of how frequently online marketing changes, one thing will remain the same: brands will continue to use stories, interaction, and creativity to attract customers.

We polled our team to see what creative, clever online marketing tactics they’ve seen this year. Here are the campaigns that made the list:

Steven Zahurones
Video game developer Naughty Dog wanted to develop a viral interest for their newest video game title that will launch on the Playstation 4, Uncharted. They created a teaser video campaign to build anticipation for the game while taking advantage of the interest in the PS4 console launch.

Rather than take the traditional video game promotion approach where you view live clips of the game, this teaser plays like a story from a first person point of view – a man is telling a story that will bring users into the game, leaving much to the imagination, but building incredible suspense.

Going live on the eve of the PS4 launch, the video gained over one million views in four days on the official Playstation YouTube channel. It also generated significant coverage from industry publications that were already tuned into covering the PS4.

Ben Brausen
Coke Zero embraced the coming holiday season and created the Ugly Christmas Sweater Generator. People can go to their website and create their own ugly sweater with everything only an elementary school teacher would love like bows, cats, and other holiday items. Then, users can vote for their favorites. The 100 sweaters that are voted the best as of December 1st will be made and sent to their creators for the holiday. This is a great campaign as it is something fun, creative, and interactive for the customer. It is something people will share with others as they want to get the word out and get those votes so they can win. The response has been so great that the website is currently down due to the traffic load.

Katie Bresnahan
In light of the holiday season and their recent push for borderline-racy advertising that gets people talking and goes socially-viral-crazy, (See “Ship My Pants” which has almost 20 million views on YouTube, and “Big Gas Savings” with just over 6 million.) Kmart’s latest campaign is called, “Show Your Joe.” It features men in tuxedo jackets wearing holiday themed boxer shorts, dancing to “ring” like bells. Kmart as a retailer has struggled in recent years, rapidly closing stores in an effort to stay afloat. 2013 has been their year for advertising in that it has definitely gotten people talking and given them some great brand exposure.

As its predecessors did, the ad is causing lots of controversy, and yet younger people are heavily embracing the ad via their social channels. “Show Your Joe” is well on its way to becoming yet another viral success for this struggling retailer making a name for itself in the marketing space.

How it worked: Fans had to follow the @crack_the_us_open Instagram page, search the posted photos of fans for clues, and comment on the correct photo with a code word given each day. Fans who commented first and followed clues that led to the last photo had a chance at winning tickets! 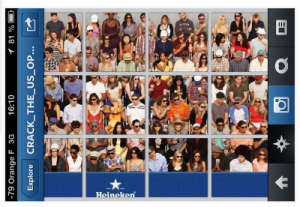 Heineken got a boatload of brand visibility and 1,400 Instagram followers on its special Instagram page without redirecting visitors elsewhere – it all happened within the confines of their Instagram. Cool!

In order to create buzz around this new release and drive traffic to the Bob Dylan official website, Interlude created an interactive music video for the 1965 song “Like a Rolling Stone.” The music video is formatted into a TV screen, and viewers can flip between 16 different channels and view different shows including, “The Price is Right” and “Pawn Stars.” The actors in the shows lip sync to the song as it plays.

Viewers are encouraged to share the video on their social channels, and with so many Bob Dylan fans out there, and the visuals being pretty incredible, social viral success was all but ensured.We’re eager to stay tuned to learn how it impacted record sales and hear a view count!

Jesse Pickrain
Have you ever been offered free underwear? If you’re like most people, the answer is no. But Fruit of the Loom set out to change that in 2013. The company sent a message to LinkedIn members who either changed jobs or got a new job for a 30-day period, allowing them to claim some undies on the house.

Because, “Great fitting underwear can help you start your workday in a great mood.”

Word is, new customer purchases are up, and I’m also told my colleague’s uncle’s friend’s nephew changed jobs for the sole reason of claiming a pair.

There are countless ways to weave stories into your content to connect emotionally with your audience. As we transition to the New Year, think of ways events, holidays, pop culture and trends can factor into your marketing mix to help take it to the level of our examples!

What creative campaigns did we miss? Feel free to share your favorite 2013 online marketing campaign in the comments!