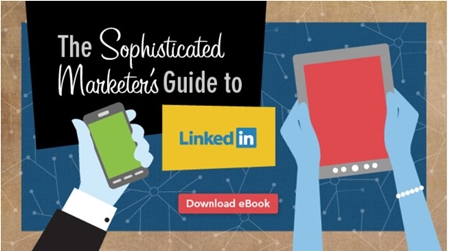 The Sophisticated Marketer’s Guide to LinkedIn – Today’s successful marketers aren’t just good at one thing; they are multifaceted. They are a new breed of socially savvy practitioners grounded in timeless, Mad Men-era tactics as well as new, modern technologies. They constantly strive to be the best at what they do by combining proven strategies with the latest and greatest tools to crush their marketing objectives. This guide is as comprehensive as it gets. Download it here. You can also register for a webinar to be held February 19, 2014. [TopRank client]

Study: Only 4.7% of a Brand’s Fan Base Generate 100% of its Social Referrals – Yet, amazingly, most brands are ignoring the best asset they have for influencing others – the 4.7 percent of their fan base that make up their brand army. The study shows that this influential group can enjoy 176 times the reach of an active engaged fan that is interacting with your posts and campaigns. When you are a large brand, this group can number in the millions. Those companies who identify advocates amongst their fan base have increased their influencer armies from 4.7 percent to over 40 percent.

Expedia Lost 25% of Their Search Visibility in Google Possibly Over Unnatural Links – From the looks of it, it does appear Expedia was participating in paid linking schemes that eventually caught up with them. It is unclear if this was done internally by Expedia itself or if it was done through an outside SEO firm. It is also unclear if they used some sort of link network or did all of this manually. Google stated that “they typically don’t comment on specific companies regarding search rankings.” Search Engine Land

Instagram Fastest-Growing App Among Top 10 in 2013 – Facebook was the No. 1 app overall in 2013, but its photo-sharing subsidiary Instagram was the fastest-growing app among the top 10. The growth in social media — especially among teens — is shifting to single-purpose or messaging apps, including Instagram, Snapchat, Whatsapp, Whisper and others. How Instagram’s growth translates into ad sales should start to become clear this year, with advertising in the app just launched at the end of 2013. MediaPost

Google’s Eric Schmidt: “Mobile Has Won” – It’s possible that by next year at this time smartphone ownership will exceed 80 percent of US adults. That doesn’t mean all smartphone-consumer behavior will be uniform but it does mean that for a significant percentage of smartphone (and tablet owners) these devices will be primary and the PC secondary. Google is of course the top mobile search engine and Android is the world’s dominant smartphone OS. However Google is still struggling a bit to boost mobile CPC prices. Marketing Land

Why Facebook Users are Valuable to Marketers – [Infographic] Facebook users spent 20 billion minutes per day on the social network in June 2013, or 8.3 hours per month, per user. 73 percent of U.S. Internet users with annual salaries of more than $75,000 use Facebook, compared with 17 percent for Twitter and 13 percent for Pinterest. These are just a few of the stats Top Marketing Schools put together, focusing mainly on the social network’s massive user totals. All Facebook

Online Content Marketing in 2014: 5 Big Shifts in Store – Marketers in the digital industry are speculating on what will be big in 2014. Find out 5 big shifts that will likely affect online content marketing this year. You definitely want to be read this excellent long form post to make sure you stay on top these industry changes and predictions. Content Marketing Institute

Email Said to be the Traffic Source for A Majority of Smartphone Conversions – The large share attributed to email is the result of remarketing emails likely being opened on mobile devices and email eliminating the need for on-site searches on smartphones. Cart abandonment rates are still much higher on smartphones (94%) than on tablets (81%) and desktops (76%), per the data. But if checkout processes can be improved, the researchers see the potential for mobile to be used “as a critical conversion device.” MarketingCharts

Pew: 50 Percent in U.S. Now Own Tablet or E-Reader – The marketing implications of massive tablet ownership are obvious and far reaching. Tablets are poised to become the shopping device of choice for large numbers of consumers. Mobile devices are often preferred by users to PCs (primary vs. secondary) and tablets drive more “m-commerce” conversions than smartphones. Marketing Land

Nielsen: 73% of Brand Tweeters Also Tweet About TV – Knowing that the majority of people who tweet about brands also tweet about TV is significant for advertisers, agencies and TV networks looking to understand how brands can reach people who will socialize their messages. TV tweeters talked about brands across five categories: consumer electronics (74%), restaurants (48%), food (29%), beverages (27%) and automotive (24%). ClickZ

82% of Companies Ignore Branding Goals When Interacting With Customers – According to new poll conducted by Forrester Research, only 18% of companies provide a customer experience based on their branding strategies. In other words, if a company runs a major ad campaign, it’s unlikely that its customer support and sales staff are taking a notice. Marketing Pilgrim

Google Alerts Get a Shiny New Redesign – The new alerts tell you what kind of alert you’re getting (hourly, etc.), have larger headlines to click on and get three social sharing buttons: Google+, Facebook and Twitter. There were no social buttons in the old alerts. Also new is a “Flag as irrelevant” link with each story. Search Engine Land

Facebook Marketing Declines: How Business Should React – On December 2, 2013, Facebook announced they will start to decline or diminish organic reach for pages because users predominantly want to see content from friends and brands that they enjoy interacting with. According to Inside Facebook, studies show more than 40% decreased organic reach on Facebook. Learn ways to counteract these changes here. Social Media Examiner

Twitter Gets Serious About Social Shopping – Payments start up Stripe is in talks with Twitter, reportedly, to make a one-stop shop for social e-commerce. The rumored functionality would allow retailers to accept purchases from inside the tweets themselves, making a more efficient market for advertisers who could see instant sales and eliminate extra clicks between the social network and their retailers’ websites. Fast Company

Spotify Now Lets Artists Sell Merchandise – Spotify’s 24 million music-loving users can now see their favorite artists’ merchandise, such as t-shirts, vinyl and posters. There are zero fees or commissions from Spotify or Topspin, their channel partner, and artists do not need to change how they sell merchandise. Spotify will link to your existing merchandise anywhere on the web and display it on the Spotify artist page. Spotify

How the Feed Changed How We Consume Content – [Infographic] The feed now dominates online content consumption, from the news we read on our mobile devices to the social networks we check constantly throughout the day, as well as the ads that integrate onto those platforms. This infographic chronicles the history of feed formats, from its humble search engine origins to the dominance of feed-based news readers and networks. Mashable

Amazon’s Next Big Thing: Predictive Shipping – In December, the company received a patent for what it calls “a method and system for anticipatory package shipping.” Amazon says it will be able to predict a customer’s purchase based on a variety of factors, including shopping history, wish lists, and when new products in a series are released. Wall Street Journal

Can Bitcoin Save the NBAs Most Beleaguered Team? – The Sacramento Kings announced recently that they will be the first professional sports organization to accept Bitcoin as payment for team-related transactions. Having pitched the league on a tech-heavy direction in order to keep the team in Sacramento, the Kings’ majority owner, Vivek Ranadive, is aiming for a wallet-less fan experience. Fast Company

Yelp Turns Up the Heat: 285 Consumer Alerts Issued Over Fake Reviews – The alerts are a pop-up that shows on a Yelp business profile page and warns consumers that a Yelp sting operation has caught the company trying to acquire reviews by buying them, offering gifts or discounts, or some other way that Yelp doesn’t allow. Search Engine Land

Did You Know? The Collaborative Economy is a $110 Billion Market – According to MIT Sloan expert, Jaime Contreras, the collaborative economy is far more than just a rapidly growing, nouveau approach to business; it could actually turn out to be a billion-dollar cash cow. Tapping into your company’s potential to participate in the sharing economy will likely prove to be a critical component of business strategy going forward; it’s yet another distinguishing factor between sustainable growth and market irrelevance. Business2Community

A Data Scientist Explains What Makes A Viral Reddit Post – A computer science graduate research assistant at Michigan State University analyzed over 850,000 top posts from the past year on Reddit from 4,200 of the most active subreddits. Here are his key takeaways. Pretty fascinating reading actually. Business Insider

On Rock & Roll Social Media & Content Marketing Interview With Jason Miller of LinkedIn, Jamie Turner said, Awright, Jason — Glad to see you on Lee’s blog. Bravo, my friend. And Lee, keep up the great work — you keep uploading “must read” blog posts which is keeping me from doing any work. 😉

On Online Magazines & Apps for Content Marketing: Brand Examples and Best Practices, Jayanta Dey said, Content marketing is the art of communicating with your customers and prospects without selling. It is non-interruption marketing. It’s means creating and sharing valuable free content to attract audience. Nice article Nicolette. Keep it up.