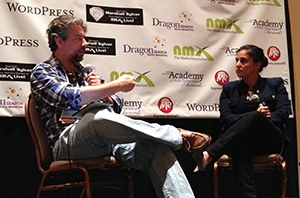 Big sports are big business.  There are billions of dollars to be made and no sport is growing faster than the Ultimate Fighting Championship (UFC).  Millions of viewers worldwide tune in to watch fighters pummel each other.  Jackie Poriadjian SVP/Strategic Marketing/PR & Distribution for UFC and Dave Taylor sat down and discussed How The UFC Rocks Social at NMX 2014.

Lets take a look at some of the numbers that make the UFC a true heavyweight.

Looking at those numbers, it’s easy to see that there’s a ton of social talk around the UFC and it’s fighters.  And for a brand with that much activity, they spend a relatively small $500k-1 million a year on paid social promotion.  While they do some paid social advertising, they don’t do it for their events.  Their fans do the promotion for them.

So how do they manage all of that social chatter?  An army of social media managers right?  Nope.  Just 2 people at their headquarters to deal with messaging and managing over 15 million followers.  How do they manage their fighters and their messaging?  They don’t.  While they do give their fighters some initial social training and coaching to keep them out of trouble, they let them manage it themselves and say what they want (they’re all independent contractors technically).  Should an issue come up there is the possibility they’ll send them to sensitivity training, make them do community service or impose a fine but that has been very rare.  Their biggest challenge hasn’t been the messages their fighters post but how they respond to criticisms and comments from their followers. I’m sure we’ve all had times where we’ve had to take a step back and take a couple deep breaths before responding to someone on social media.  Now try to teach that to someone who knocks people out for a living.  Fun job huh?

The UFC’s fighters take a lot of pride in the sport and want to take it to the next level.  They love interacting with their faithful fans so most are very active on Twitter and Facebook.  It’s that high level of interaction directly with their fans that has allowed the UFC to build such a large following.

So how can just 2 people create all the great content that people follow the UFC for on social media?  It’s not a 2 person effort alone.  The entire organizations has access to a central dropbox in which they can upload any content they create.  Pictures, video, and more are all put into a central database that allows their social managers to pull and post the best from their photographers, videographers, fighters, reporters, and other employees.  It’s a great way to always have tons of great stuff for your followers to consume.

A young demographic (UFC pretty much owns the male 18-34yr old demographic when it’s on) that loves social media has helped to fuel the explosive growth of the UFC and MMA.  As the brand continues to struggle to gain more mainstream acceptance (the New York Times and others for instance doesn’t generally care to cover UFC fights), the push from social media is helping to make the UFC a main event.

Do you think they have what it takes to TKO other professional sports?