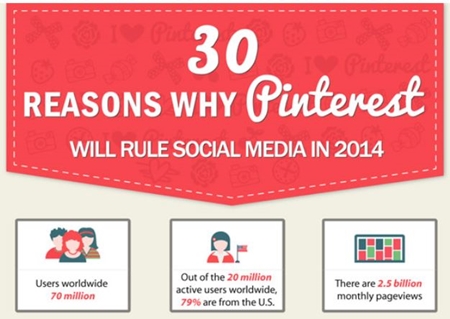 30 Reasons Pinterest Will Rule in 2014 [Infographic] – As much as we would like to think Facebook is the most powerful social media tool, Omnicore has made a good argument that Pinterest has really picked up the pace and is here to rule over all the other social media tools. See why here. Sociable Blog

10 Ingenious Hacks That Helped Facebook Take Over the Internet – Behind the scenes, inside the massive data centers that power this worldwide social network, you’ll find all sorts of other technologies that have changed our world in very different ways. Learn about Zuckerberg’s “Hacker Way” on an epic scale. Wired

The 2014 Google Tracker – This post is a collection of all the hints, announcements, and acquisitions  from Google lately, such as plans for Android, gaming, smart homes, healthcare, robots, and much, much more along with some speculation. Arstechnica

Shares in Twitter Plummet After User Growth Slows – Twitter was valued at $18 Billion when it floated on the New York Stock Exchange in November, but the blogging platform shares fell by 24% after it reported slower growth in user numbers. Twitter averaged 241 million monthly users in the last quarter of the year, up just 3.8% on the previous quarter. BBC News

Twitter Turns to Flipboard to Acquire Users for Vine – Growth is a top-of-mind concern for Twitter (see above) and it appears app install ads are part of the strategy. In this case, a beautiful, magazine-like placement running in Flipboard this week for its six-second looping video app Vine. The current full-screen ad is aimed at user acquisition and prompts users to install Vine. AdAge

Google Showing Large Video Embeds in Some Search Results – Now, if you search Google for video related content, Google may return a large playable video directly at the top of the search results. Search Engine Land

Google Warns Local Businesses: You Have 3 Weeks to Save Your Places Listing – If you have your business set up on Google local pages, there are a couple changes that you should be aware of when it comes to verifying and updating your Google+ business listing. If you received an “Action Required” email from Google, don’t worry. You simply need to login to Places for Business, review your business information, update it if necessary, and click Submit. Search Engine Watch

Pinterest Launches New Mobile Website for its Growing Base of Mobile Users – While Pinterest’s blog post claimed the mobile redesign is the result of the site continuing to grow internationally, TechCrunch reports the primary driver of the redesign is Pinterest’s influx of mobile traffic, claiming 75 percent of all daily Pinterest traffic comes from “native mobile applications.” Their new mobile site includes an updated board page, sign-up flow, as well as now displaying recent boards in the board picker. Marketing Land

London Tube Strike: 10 Brands Marketing in the Moment – Here’s how brands have used Twitter, Vine or email to market in the moment and try to make the most out of the London Underground strike action. Great use of humor (or should I say, humour;-) eConsultancy

Yahoo Turns to Yelp to Beef Up Local Search – Yahoo has recently started to introduce a new, more elaborate presentation of local business content into its search results. It’s very likely that we’ll see Yelp reviews, photos and other content integrated into Yahoo search in a way very similar to Bing. However, Yahoo will probably go further if it considers Yelp’s content a potential differentiator. Search Engine Land

Klout Evolves Into a Content Creation Platform as it Seeks to Help You Become More Influential – The emphasis is no longer on your score, but about how you can create and share informative and relevant content in order to keep your audience engaged and influenced. Klout’s Chief Product Officer says that the redesign includes four tags that will be displayed to highlight fresh content, along with those stories that are starting to trend online: on the rise, crowd pleaser, hidden gem and hot off the presses. The Next Web

Study: 73% of U.S. Teens are on Facebook – As the hoopla surrounding Facebook’s 10th birthday this month dies down, you may have missed this recent study from Pew Research Center. They released a treasure trove of facts about the social network, including one that debunks the theory that Facebook has a teen problem: 73 percent of U.S. Internet users between the ages of 12 and 17 are on the social network. Media Bistro

Google Adds 1,000+ New Categories to Places Dashboard – Google is making some new changes to Google Places for Business in order to make it easier for users to find businesses in international countries by adding more than 1,000 categories globally into the Places dashboard. Search Engine Watch

Mozilla to Sell Ads in Firefox Web Browser – The ads will appear within the tiles of Firefox’s new tabs page, which will also begin to suggest pre-packaged content for first-time users. Mozilla is calling the new initiative “Directory Tiles.” Despite their previous stance on blocking third-party ad technologies by default, they assured an IAB audience recently that they actually want to work with them, rather than lock down its ecosystem. AdAge

Friendlier Twitter Photo Sharing is Here – Now you can crop your photos by selecting an aspect, such as square or wide. You can rotate an image before you share it to make sure it fits nicely in your Tweet. And when you upload a photo of people, you’ll see a reminder to @ mention your friends so they can see your photo too. Available now on Android and coming soon for iPhone. Twitter Blog

Study: Marketers Begin Aligning Content With the Buyer Journey – Recent research has brought to light the importance of customizing content to the buyer’s journey stage, something that few B2B content marketers feel adept at doing. A new study from Oracle Eloqua and LookBookHQ, conducted among the Oracle Eloqua community, suggests that content marketers are trying to get better on this front. Marketing Charts

Google’s New “Rich Snippets” Penalty – Here’s an actionable checklist to make sure your rich snippets are in order — the easiest ways to validate your structured data markup and the main points to consider. Link Assistant

Google Brings Search Funnels Attribution Modeling Tool to AdWords – Wanting to help marketers better understand how AdWords campaigns are part of the sales funnel, advertisers can look at five different attribution models in AdWords and compare up to three attribution models simultaneously to analyze keywords, ad groups and campaigns that are contributing to the funnel, but aren’t represented in last click conversions. Search Engine Land

Facebook Now Lets You Edit Your “Look Back” Movie – After numerous user complaints, Facebook implemented an “edit” button. The editor might not be quite as feature-rich as some might have hoped; you can’t choose any Facebook photo to replace those that you don’t like — you can just select from a wider array of pre-picked photos/status updates. TechCrunch

Pandora Simplifies Open Music Submission as It Launches Ad-Powered Growth – Pandora’s personalized stations are designed as much to introduce users to new music as they are to let them have what they are already familiar with. The simplified submission process is designed to give another big push to the discovery experience. ClickZ

From the Online Marketing Community:

On 9 Tools to Discover Influencers in Your Industry, Joan Stewart said, Thanks, Lee, for a fabulous list of tools that help people really drill down and target influencers. One of the best things about knowing the big dogs in your industry is that you can not only connect with them, but learn from them.

On Print Newsletters as Content Marketing Tactic: Pros, Cons, Examples and Best Practices, Sarah Bauer said, I like the idea of creating value in the print newsletter as something to hold on to in the home or workplace, due to its usefulness or sheer aesthetic appeal (or both!) That might be a good result to strive for when approaching this tactic.

On Does It Still Make Sense For Companies to Blog?, Tom Collins said, Great stuff, Lee. It seems to me that a company blog remains the hub around which all the other social media/networking platforms should revolve — if nothing else to collect your content in a platform you actually own and control. I wrote a post back in 2009, attempting to list the “flavors” of ROI for businesses from engaging in social media and made it to 16. You’ve ticked several of them above. The more things change …

Brandon Chestnut said, Congrats on delivering such great content for so many years. Looking back, it’s hard to believe how far we’ve come since 2003.

While the lens through which we have viewed blogs has changed with the rise (and fall) of many social networks and communities, I still feel strongly that blogs serve as the “center of the universe” for most online marketing or content programs. I remember when Chris Brogan began talking up the idea of brands leveraging home bases and outposts. In my mind, that approach still holds true today. While, there are more mediums and methods for telling stories and delivering content in 2014, there still is a need for a central location where all efforts are tied together. More often than not, blogs can serve as that hub.