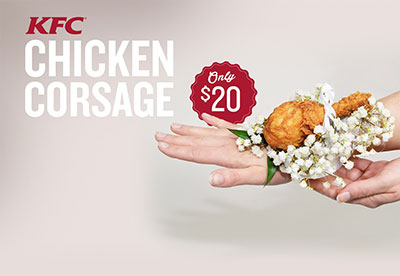 #PutAWingOnIt KFC’s Chicken Corsage Just Went Viral – Prom season is in full swing, and KFC wants to add a little something to the big night: a chicken snack on your date’s wrist. USA Today

Twitter to Offer Mobile Ads Beyond Twitter In Bid for Revenue – Twitter’s ad world just got a little bigger. The messaging service — whose business is already 75% mobile — started selling ads in mobile apps beyond Twitter today, a key rationale of its purchase of MoPub, a mobile ad exchange it purchased in September. Ad Age

Facebook, LinkedIn Rated Above Twitter For Social Media Marketing [STUDY] – Marketers have voted Facebook as the most marketing friendly social media platform, reveals a new study. The Direct Marketing Association‘s inaugural social media scorecard polled 171 UK social marketers on their social channels of choice, asking them to rate each platform on its performance for planning, execution and optimisation of marketing strategies. AllTwitter

Mobile accounted for 28% of US PPC impressions in Q1 2014: report – It’s no great secret that mobile search is becoming increasingly popular and that it will soon become more common than desktop search. However new data from The Search Agency suggests that there’s some way to go before mobile devices challenge desktop’s dominance of paid search. Econsultancy

Google’s New +Post Ads Now Available to Brands With 1K+ Followers – Back in December, we reported that Google was testing out +Post ads with a handful of big brands. +Post ads promote a brand’s Google+ post across the roughly two million sites in Google’s Display Network using AdWords targeting data. That means if you went on a site like Elle, you could see a brand’s fully interactive Google+ post in place of a traditional banner ad. HubSpot

Google Informs Users That it Reads Their Email – Google updated Gmail’s terms of service this week to inform users that incoming and outgoing emails are automatically being scanned to help create targeted ads. Lovely. The update says that Google is using software to scan email when it is in transit or stored on Google’s servers. SocialTimes

STUDY: Instagram Is Most Important To Teens – The subsidiary has overtaken the parent company, as a new study from Piper Jaffray found that the most important social network for teens in the spring of 2014 is Instagram, which passed both Facebook and Twitter to claim the top spot. AllFacebook

U.S. Internet Ad Revenues Soar to a Record $42.8 Billion – An new report from the Interactive Advertising Bureau reveals a record high for U.S. Internet ad revenues in 2013. Internet advertising revenues in the U.S. reached a record high of $42.8 billion in 2013, according to a report released by the Interactive Advertising Bureau (IAB). This was a 17 percent jump compared to 2012 and means that Internet has surpassed broadcast TV for the first time. ClickZ

Reports: Mobile Traffic Up 50 Percent, M-Commerce Doubles – Mobile web traffic has grown 50 percent over the past year and now represents more than 25 percent of all internet visits according to a study by Wpromote. The company looked at traffic to 35 of its client sites, including e-tailers, B2B industries and consumer services. Marketing Land

From The Hidden Value of Influencers in B2B Content Marketing, Mark Masters said, “To think that a few years ago we couldn’t reach out to authors and others who influence us and now we have this ability to connect and also bring to the spaces that we own ie. from an email conversation to a published article from a respected thinker, is one of the greatest opportunities we have as businesses and the popular topic of building our own media companies.”

Mr Marketology added, “This is truly valuable when developing quality content. It really falls in line with becoming an authority by identifying your audience, their needs and leveraging other expert opinions along with your own to become a voice in your industry. I really found value in this article and will be applying the principles.”