The expression “newsjacking” has been popularized by David Meerman Scott and the available material on the topic is near limitless from case studies of Oreo’s Dunk in the Dark Twitter ad to missed opportunities by Poland Spring.

Related to newsjacking is the practice of leveraging popular culture references in brand messaging. Movies, music, memes and more can be deftly integrated into your social media and content marketing programs to provide an entertaining context to otherwise boring business information. Beyond attaching to something that’s popular on TV, the best applications of popular culture references find creative ways to make a connection back to the brand’s products or services.

Beyond Newsjacking: Pop Culture in Content Marketing with Movies, TV and Memes 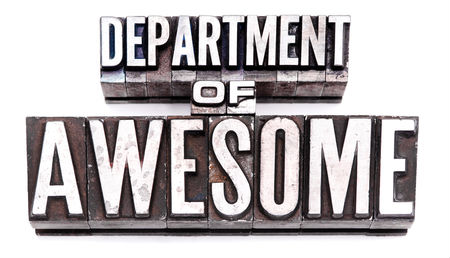 Successful content marketing programs are ongoing communications efforts that empathize with customers and deliver useful experiences. Each content object published is a promise to the community that something relevant, useful and info-raining is in store.

Consistently producing content experiences that inform and inspire creates one of the most powerful customer states: anticipation. Few things are more powerful for attracting a loyal following of customers and advocates than the anticipation to see what’s coming next.

But how can companies with slim budgets create such a content marketing program? While there are entire books on the subject, I think these are the 5 essential components for initiating a growing momentum of content awesome.

5 Steps to Content Marketing Awesome – You Can Do This!

Hashtags are wonderful social media marketing tools. They can highlight trends, tie campaigns to chosen keywords, and isolate conversations. The allure of the hashtag is strong, especially for brands that desire a customized platform for their content. Twitter (and, to a lesser extent, Facebook, Instagram and Google+) thrives on hashtags for everything from primetime TV shows to organic political movements.

However, like all good things in life, the hashtag should be used in moderation. The pound sign carries great power, but only if deployed responsibly. TechCrunch’s Jordan Crook bluntly referred to users who abuse the hashtag as “hash-holes.” Avoiding that label requires an understanding of where the hashtag is most beneficial in messaging – and where it should never be deployed. Recently Verizon Wireless asked me to share some of my favorite mobile apps. I sent them a list and 6 of them made the post. But it got me thinking: what mobile apps do other marketing and communications professionals use?

I know mobile phones and apps are an inseperable part of everyone’s life and people are often looking for new apps for both work and especially for fun. So I’ve included a list of my 10 plus 39 more that were suggested by my team mates at TopRank Online Marketing.

1. HootSuite – This is my on the go, social media command central. HootSuite gives me access to multiple Twitter accounts, LinkedIn and even VK (Russian). iTunes – Google Play

YouTube, Google+, LinkedIn Drive More Engaged Referrals Than Facebook, Twitter [STUDY] – Shareaholic looked a six months of data from more than 200,000 websites between September 2013 and February 2014 and discovered that the most engaged referral traffic comes from YouTube, which delivered 3 minutes 47 seconds and 2.99 page views per visitor. AllTwitter

Twitter Ad Revenue Forecast To Exceed $1 Billion In 2014 [Stats] – Twitter’s advertising revenue is on track to exceed $1 billion in 2014, up from $594.9 million last year, with further accelerated income from ads envisaged through 2016, reports eMarketer. AllTwitter Social Media at a major brand – I think many people in the social media marketing industry would consider such a position a dream job. Or in the case of Charlie Kautz from TaylorMade Golf, the best job in social media (according to Jay Baer).

While Charlie provided a very useful tip for the recent Social Media Marketing eBook we created for SMMW14, I reached out to him after the conference to get more of a deep dive into his role at TaylorMade Golf, lessons he’s learned, how marketing and PR work together, the importance of SEO and what he really thinks about Facebook.

What makes your job at TaylorMade-adidas “The Best Job in Social Media”? The opening keynote at ClickZ Live New York started off with an introduction from John Barnes, Managing Director, Digital & Tech at Incisive Media.

The featured speaker, Randi Zuckerberg (sister to Facebook founder Mark Zuckerberg in case you’ve been off the grid for a few years) provided an overview of her experience at Facebook during the early days and highlighted what made the initial DNA of the company work to help it grow. She also shared some good humor and a list of 10 new media trends that are posed to impact consumers and the way we market to them. It’s April Fools day today but there was no fooling attendees of the first ClickZ Live conference in New York who attended the pre-keynote presentation offering an overview of the current digital marketing landscape given by Lauren Vaccarello, VP of Marketing of AdRoll.

A surprising number of attendees showed up at 8am for this preview of digital marketing and Lauren did a great job giving introductory information on everything from Paid Search to Email to Retargeting. If you’re not sure whether mobile makes sense or what retargeting is, read on.

Looking back on the history of digital marketing from the first clickable ad in 1993 to the founding of Google in 1998 to the start of Facebook in 2004, few people could have guessed how big and influential they would turn out to be. And who would have predicted the popularity of  Snapchat or What’sApp being purchased for $19 billion?